"Finishing this fight is all I’m concentrating on and then whatever they give me next, I want to stay active and roll right into another one after this." - Sam Sicilia 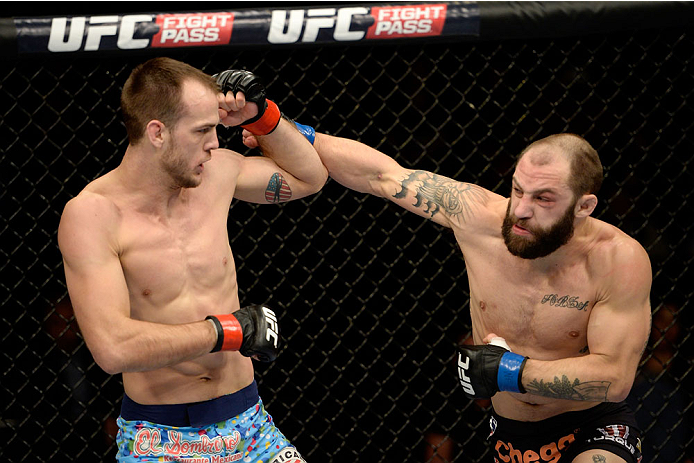 Nobody paid much attention to Sam Sicilia’s whereabouts earlier this month, but maybe they should have. In Connecticut, far across the country from his Spokane home base, the featherweight prospect was preparing his friend and teammate Michael Chiesa for his fight against Joe Lauzon at UFC Fight Night on September 5.

Forget the fact that Sicilia has his own fight – in Japan no less – this Saturday against Katsunori Kikuno. This was just as important, but when asked about it, he doesn’t see it as a big deal, just something friends do for one another.

“We’ve got a lot of up and coming guys, but we’re not deep in our gym and me and Mike gotta stick by each other,” Sicilia said.

And that was it. Sicilia’s actions say a lot about friendship and loyalty and being there for a teammate. It’s the definition of what we would now call “old school,” as if such attitudes simply don’t exist in modern society. And maybe they don’t like they used to, but Sicilia will not stray from what he believes in.

Thankfully, what can rightfully be termed as “old school” is his fighting style - an aggressive, take no prisoners assault that celebrates the knockout, the fight, and the win, ideally in that order. It’s resulted in seven of Sicilia’s 13 pro wins coming by KO, yet one that didn’t – against Aaron Phillips in May – displayed a maturity to his game that should serve him well in the future. Not that fighting a disciplined three-rounder and picking up a decision victory was the initial plan.

“In a lot of my fights I like to jump around and jump in and I actually broke my foot a week before the fight,” Sicilia said. “But that was kind of the game plan anyway. We were gonna stay in his face and take my time in the cage and beat him up for three rounds rather than spaz and survive and spaz and survive. It was another fight where I felt that I had to win again. I didn’t know if I’d get cut, and losing to a newcomer would be lame, so just staying focused for three rounds was the key to that fight for sure.”

Now at the .500 mark in his six UFC fights after a stint on season 15 of The Ultimate Fighter, Sicilia believes that his apprenticeship is over, with now being the right time to make his move.

“I just gotta string something together,” he said. “This is my seventh fight in the UFC, and they’ve given me enough time to settle in and get used to fighting just elite fighters, so it’s all about stringing them together now. Finishing this fight is all I’m concentrating on and then whatever they give me next, I want to stay active and roll right into another one after this.”

This fight is an interesting one against the veteran Kikuno, whose karate-based style served him well in his debut UFC win over Quinn Mulhern in January, but backfired when he ran into the fast and heavy hands of Tony Ferguson in May. When asked if his eyes lit up when he saw Kikuno going after Ferguson with his hands down at his waist, Sicilia laughed.

“Absolutely. You know what you’re gonna get with him, and he fought that way for all his fights. He’s tougher than I thought, but watching him and Ferguson, if you try to stalk me down with your hands at your waist, I’ll put your mouthpiece in the fourth row. He has okay head movement, but he has just one slip. He’s fought tough guys like JZ (Cavalcante) and (Eddie) Alvarez, and he fought them tough, but he’s very breakable.”

You have to think Kikuno will keep his hands up against a one-punch knockout artist like Sicilia though, right?

“That’s just how he is,” Sicilia said. “He hasn’t really adapted to MMA. He’s a karate dude and that’s his stance.”

That can’t be good.

Expect Sicilia to be swinging for the fences, and even though his travel schedule has been hectic this month, after two of his last five fights taking place in Brazil, he’s ready for the flight to Japan and all that comes afterward.

“I’m okay with this international thing because I’m used to it now,” he said. “I treat it like a business trip. The first time I felt so lucky to have that stuff paid for; I grew up a dirty little country kid, so for somebody to send me somewhere awesome was a payoff in itself.”

Now the payoff’s a win, preferably by knockout, but after losses by teammates Chiesa and Elizabeth Phillips in recent fights, this Sik Jitsu standout just wants to win one for his gym and his friends.

“I feel like I’ve got to turn this around,” Sicilia said. “I don’t feel like anybody has it out for us; it’s just a thing we’re going through right now. But I can get us back on track pretty quick.”