Sam Sicilia: Start with a KO, End with a KO 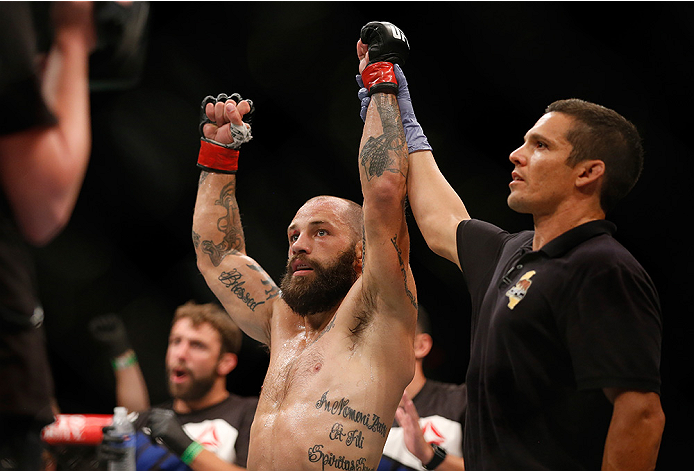 Sam Sicilia wants to finish 2015 how it started – with a knockout win.

On January 24 at UFC on FOX: Gustafsson vs. Johnson, The Ultimate Fighter 15 alum scored his third finish inside the Octagon via knuckle sandwich as Sicilia dropped and stopped Akira Corassani in front of the Swede’s home crowd. This Saturday at UFC Fight Night: Henderson vs. Masvidal, Sicilia is intent on recreating that pummeling performance by scoring a knockout of Dooho Choi in Choi’s native South Korea.

“I started this year out how I wanted to and I’m going to close it out how I want to,” Sicilia said. “This knockout here is going to be better than how I knocked out Akira. A guy can only hear he’s so close to $50,000 so many times before he goes in there and takes care of business like that. That’s what the focus for me is in this fight. I’m going to end the year how I started it. I’m going to shut [Choi] off. I’m very confident in that, I really am. I know people try to hype the fight and will say stuff like that, but I’m going to knock him out - for sure.”

The 29-year-old, who was born, bred and currently training in Spokane, Washington is experiencing easily his best stretch in the UFC since making his debut in 2012. After more or less alternating wins and losses for his first seven Octagon outings, Sicilia has shown great maturity this year, with two calculated efforts in his first-round finish of Corassani and his most recent grappling-heavy unanimous decision over Yaotzin Meza in July.

“I set goals at the beginning of the year,” Sicilia said. “I wanted to be 3-0 and I wanted three finishes. I didn’t get [a finish in his win over Meza], so I have to reevaluate my goals. But the way I train, it’s way more focused. I used to just want to go and get into a fight. Now, I focus on winning the rounds. It sounds dumb, but when I was grappling, I would give up position for the sake of cardio to roll around. Now, when I fight - it’s all about winning. I’m changing the way I do things. I’m more focused. I’m not just going out there and fighting like Clubber Lang and throwing hooks until somebody drops. It was a little bit of growing up in the UFC.”

The W over Corassani showed the featherweight’s trademark power - which has earned Sicilia eight KOs across his career’s 15 wins - with some improved precision and shot choice. Meanwhile, the Meza matchup showed another side of Sicilia with his ability to come out on top in scrambles and his willingness to go for a few neck-wrenching guillotine choke attempts. It wasn’t his ideal victory, but Sicilia beat an opponent by winning grappling exchanges and threatening with submissions, which are weapons that all fighters need to have in their arsenal.

“A win is a win in the UFC, but it’s not the way I like to win,” Sicilia said. “Most of those guillotines were defensive grappling - grabbing them on his shots, but he bails so quick on those guillotines that I would end up on top. He would roll out and I would end up on top. I almost had him on that one, but he eventually rolled out of it, which is what he’s good at. It wasn’t like I went in there trying to show off that part of my game, but I think it’s good to show [UFC matchmaker] Sean Shelby and those guys to let them know I can do that. I just went in there and I guess I did get comfortable grappling with him and knowing that I could beat him there, but that’s not how I want to win fights. I want to finish fights.”

Up next, Sicilia will be in Seoul to tangle with “The Korean Superboy,” Dooho Choi. Fingers crossed, this fight will take place, as this is the third time the pairing has been scheduled, with Choi pulling out both times and Sicilia earning a decision win over the replacement. As for Choi, he’s on a ten-fight win streak that includes his 18-second knockout of Juan Manuel Puig in his UFC debut around this time last year. The 24-year-old will be fighting professionally for only the second time in his homeland, as he has fought almost his entire striking stoppage-heavy career in Japan’s DEEP promotion.

“Right now, I’m just training to fight anybody,” Sicilia said. “I’m not necessarily training to fight Choi because who knows if he’ll pull out again. He’s done it both times before around two weeks. I’m of the mindset to train for anybody. It’s hard to say bad things about these guys when there’s a language barrier because you kind of just look like a bully. I don’t know why this matchup keeps happening. He’s had one fight in the UFC and this will be my 10th. I’m not a complainer. The first time they asked me to fight Choi, I said yep. Then I looked him up. I’m not picky. If they want to send me somewhere, then send me. I’m the reliable guy. I can go invade these countries - it’s fun for me. I don’t mind playing that role. I’ve fought a Brazilian in Brazil, I fought a Swedish guy in Sweden. It’s familiar now. I enjoy it, honestly. So, I’ll go shut him off over there and get my paycheck and get out of Korea.”

In preparation for Choi, Sicilia is busy training in his Pacific Northwest home of Spokane with his SikJitsu teammates. Overseen by Rick Little, the team of Sicilia, Michael Chiesa, Julianna Pena and Elizabeth Phillips is young, hungry, loyal and undefeated inside the Octagon in 2015. Besides big wins in competition, the team is in the process of building a dedicated space of their own, instead of grabbing time where they can, like they have been doing. Nevertheless, Sicilia and company are on a roll and Sicilia aims to keep it that way against Choi.

“We have a pretty blue collar mentality,” Sicilia said. “Work hard and get your hours in. A weird analogy, but I would say we’re ‘locally-owned’. We’re not the same cookie-cutter gym as everyone else with the classes that teach the same combos as everyone else. It is really geared towards you. We don’t have a ton of guys in the UFC. We only have us four - two guys and two girls. It’s a little more intimate of a group. We actually broke ground on a new gym, which is a huge deal for us. We get to be like the first guys up here to build a legitimate MMA gym. For boxing, I drive to BoxFit. For strength and conditioning, I go to a different gym. Then I go to SikJitsu to put it all together for MMA. So, I’m driving all over Spokane all day. A consolidated gym is really our goal and dream to move forward in this sport.”

This Saturday in Seoul, featherweight fists will fly as Sicilia has his sights set on ending this year and Choi’s night by knockout.