Sam Sicilia: Learning on the Fly

"I can't wait to walk out there, get my hands wrapped, and throw leather at this guy." - Sam Sicilia 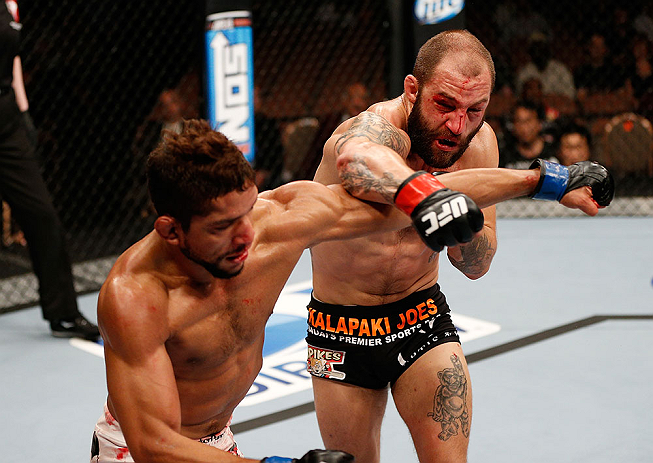 On his LinkedIn page for life, UFC featherweight Sam Sicilia should be endorsed for skills such as “strategy,” “Octagon experience,” and “getting things done”.

Prior to his stint on The Ultimate Fighter: Live season, the born and bred Spokane, Washington native had barely fought outside of driving distance. Actually, Sicilia had only fought one professional scrap outside of 2011. While his pro debut win took place in 2007, Sicilia earned the next ten wins and one loss within the calendar year preceding his TUF 15 tryout. What he learned between those bouts and on the show pale in comparison to the trial by fire knowledge that Sicilia has gained in his four Octagon appearances.

This growth and maturity was on full display in November at the UFC Fight Night in Goiania, Brazil, where Sicilia made his second visit to the South American MMA haven and walked out with an impressive stoppage victory.

“In my mind, I was fighting not as good of an opponent in not as hard of a place to fight,” states Sicilia. “I fought Rony Jason in Rio. It was kind of a shock in a lot of ways. Going from that to [Godofredo] Pepey in Goiania is not so bad. Pepey is a guy I would beat 10 out of 10 times. I don't think he's very good. I think Rony, even though he lost to Jeremy Stephens, is still top 15. It was a totally different mindset. I just had to go in, handle business, and get out of there.”

Just 13 months before the first round finish of Pepey, Sicilia entered enemy territory at UFC 153 in Rio De Janeiro against beloved TUF: Brazil winner Rony Jason. It was Sicilia’s first bout at featherweight, first ever outside of his regular time zone, and first ever outside of the country/continent/hemisphere. It was the learning experience of learning experiences, and it opened Sicilia’s eyes to how hostile a fight’s atmosphere can be. There’s a small chance any crowd will compare to how anti-Sicilia that one was.

“I think it has been good training for me,” tells Sicilia. “The first time, I fought Rony Jason down there I didn't think of the 'hometown advantage'. This was me just being naive, but I didn't think it would play a big role. I just thought whatever happened in the cage would happen in the cage, regardless of who was cheering. He came out pumped and emotional; he was tearing up on the way to the cage, and they're all cheering 'you're going to die'. I didn't really know what I got myself into (laughs). The atmosphere up here won't be like that. I don't even care if they boo me or anything because it won't be like a whole country booing me. I'm kind of glad that I got thrown into the deep end. This last fight when I came out, I came out way more focused. I wasn't just happy to be in the UFC and content - I needed to win now.”

And win he did. Roughly, two thirds of fighters foreign to Brazil have lost to Brazilians when fighting there. Sicilia was on the wrong end of that spectrum once, but then became one of the select third that has left with a W. The bout itself was short and sweet for Sicilia, as it unfolded to a TKO stoppage less than two minutes in, pretty much how they drew it up in the gym. The SikJitsu product scored a takedown, landed some ground and pound, and then landed more devastating ground and pound to pull himself to 2-2 inside the Octagon.

“We went over a lot of submission defense and being real aggressive when we got on top,” explains Sicilia. “We knew that when we got on top, we were going to attack him. I've got short little arms, so I'm pretty tough to armbar. And, I had to just watch out for Hail Mary triangles, keeping a good posture and throwing at him, but staying under control. I've hurt a lot of guys like that. I've got a lot of knockouts on the local circuit like that. Now that I'm fighting elite guys, it's just being aware of what they can do. To me, I don't think I can get subbed from the bottom. I have to be careful in transition from going from standup to the ground. Once I got on top, I felt very comfortable. After going against guys like Cristiano [Marcello] with very active guards, then to Pepey, who tends to slow down the pace, it was good for me, so I could put him away.”

Besides having fought in Brazil before, Sicilia had an ace up his sleeve with TUF 15 housemate and former opponent Cristiano Marcello. A few weeks before the tangle with Pepey, Sicilia trained with the 15-year veteran of the sport and his cavalcade of highly skilled Brazilian jiu-jitsu players at his gym CM System.

The W boasts Sicilia’s ability to game plan, understanding of his own strengths & weaknesses, willingness to go outside of his comfort zone to prepare, and the explosive knockout power that got him into the UFC in the first place. In less than two years on the big stage, Sicilia has learned from any mistakes and has grown confident through his successes. Most importantly, Sicilia knows when to make it an “ugly, dirty, scrambling, bomb-chucking” fight and when to use what he’s learned as a UFC fighter.

“I think I've finally found the balance between a fist fight and a sport,” reveals Sicilia. “That took a little while for me. I was just going out there and trying to knock someone out quick and if I didn't then I'm screwed. I have to think of it as a sport too, but mostly I have to pick my 'freak out' moments and get back to moving. If they do survive my onslaught then I have to be an athlete. I've always had the heart for it and I've gotten to where I was by being very raw. Sometimes I beat guys because I think I like fighting more than them. I've never been in an elite sport before. Some of these guys coming in come from an elite wrestling background or jiu-jitsu, and they fought the best of the best. They know that it really is the little things that count, and I've lost close decisions like the one to Maximo [Blanco] because I didn't do little things that would have made all the difference in the world. I've learned this stuff on the main stage, and it's stuff I had to figure out. I'm training for those 15 minutes, but I still have that killer instinct.”

Up next, starting off the main card at UFC Fight Night is a Southern showdown with fellow TUF alum Cole “Magrinho” Miller. A Brazilian jiu-jitsu black belt with a 20-8 pro record, Miller has been an Octagon fixture since 2007, taking on some of the best talent the UFC has had to offer at lightweight and featherweight. Last year, the American Top Team product scored a rear naked choke over Bart Palaszewski and a unanimous decision win over Andy Ogle as well as ending up on the wrong end of a controversial decision loss to Manny Gamburyan. A native of Augusta, Georgia, Miller will no doubt have the event’s Duluth, Georgia crowd behind him.

“I think he's one of those guys you have to beat to be someone in this sport,” asserts Sicilia. “He's been around for a while, but hasn't really made a run at the title and he's still in it. He's a guy I have to beat and get past to break into some new territory in the UFC. If you lose to him then you'll stay underneath him. The only guys who have beat him are good dudes. He was beat by Jeremy Stephens, but then he beat Ross Pearson. This fight is mostly about coming in shape and fighting smart, and also, getting used to his range, to be aware of it and not get freaked out by it. He's a tall guy. Also, not getting caught in transition and being aware on the ground. He's good on the ground. He's a veteran. He's not going to be scared of anything; he’s had 15 fights in the UFC. It's just a matter of going in there as a professional athlete and doing what I need to do to win.”

In preparation for Miller, Sicilia has stuck to Spokane and the crew that got him to the big show, SikJitsu Fighting Systems. Under the watchful eyes of owner/instructor Rick Little, the underrated or under-known gym has produced two TUF winners in Michael Chiesa and, most recently, Julianna Pena. With the usual core group helping out, several six-foot-plus Muay Thai strikers have been brought in, as well as more BJJ based fighters. In Sicilia’s corner for the Miller melee, Chiesa and Little will be there like always, with the addition of undefeated up and comer Josh Gow, who brings a lot of positivity, maybe even an “annoying” amount of it.

On January 15th at UFC Fight Night at the Arena at Gwinnett Center, it’s a featherweight fracas with the winner destined for bigger and better as Sicilia tangles with Miller. “I can't wait to walk out there, get my hands wrapped, and throw leather at this guy,” affirms Sicilia, who has begun to smooth his edges en route to becoming a well-rounded fighter, but is focused on being exciting as well as winning. “I'm super excited to fight. I think this fight is mine to win. I'm going to go out there, sprint across the cage, and get things going.”

With a victory in Georgia, Sicilia can also add “hot streak” to his resume.