For Sam Sicilia, It's All About The Streak 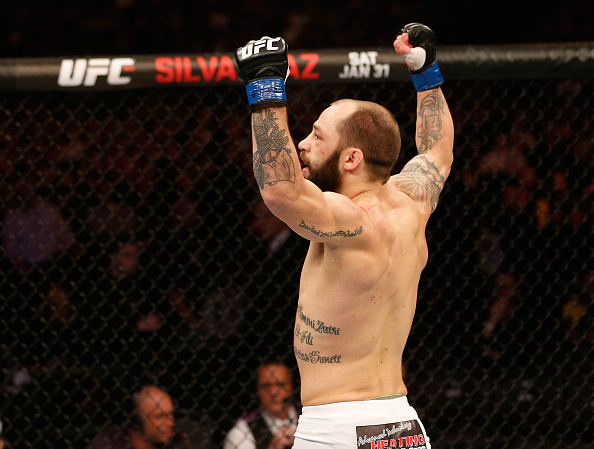 “If I don’t knock him out even better than I did Akira Corassani I will be disappointed,” he said. “I’m going to knock this guy out. He’s stepping in on short notice with a tough opponent. I’m going to roll right through him.”

Meza is stepping in after original opponent Doo Ho Choi had to pull out due to injury just two weeks before the fight.

Sicilia had just been visited at the Spokane gym he trains at with Michael Chiesa and JuliannaPena by a member of the California Athletic Commission when I caught up with him.

“I just got my random drug test, which I’m all for,” he said.  “I like it a lot; they can test me as much as they want. I like that my opponents are getting tested, especially at the top of the sport.”

Sicilia, who made quite the character on The Ultimate Fighter 15, said he never realized how much of a recluse he was until he watched the show after the series was done. “I put my mattress on the balcony and taped the door shut,” he said. “I even got fined because they were filming me eating oatmeal and I said ‘don’t you have like nine hours of me eating oatmeal already,’ and you’re not supposed to talk to the crew when you’re on the show.”

Sicilia has kept a low profile since those days in the world of reality television, and it’s by design. The way he sees it, unless he starts putting together a string of Ws, then he’s got no right to run his mouth about much of anything.

“I just want to get in there, get my paycheck and go home,” he said. “I think I’ve had a rough start to a great career. I have the power. The best feeling in the world is when a referee is pulling me off of my opponent like he’s saving the guy’s life. I think my biggest problem these days is the lack of fights that I have.  When I was fighting before I got into the UFC I would fight like seven times a year. I would bring my gear to shows just in case someone missed weight or couldn’t fight for whatever reason. I would step in and fight anybody. I just want to fight way more like Donald Cerrone. That’s my goal. I want rattle off three or four wins in a row so I can get more fights. You have to be really established if you want to be a guy like Cerrone. You have to finish guys in exciting ways.”

That’s a catch-22 for a guy like Sam, who finds himself in a transition period where it pertains to his fight style and fight camp. He’s always been the type of guy who trained without so much of a game plan. Sicilia has always been known as the guy who will go into a fight and figure it out as the fight went on. Not anymore.

“I’ve never been a setting goals type fighter,” he said. “I would just go out there and start fighting. Even in training I would just put myself in s**tty positions and get out of them, mostly for cardio. My focus has shifted in the last few months. I am focusing on winning the round, winning the exchanges and winning the positions. I have learned that instead of chasing the Knockout of the Night bonus, if I focus on winning those things will happen.”

Saturday will be Sicilia’s ninth UFC fight. He’s batting .500 thus far, but he feels like now is his time. Things are finally clicking. His stand-up has never looked better, and he’s finally able to let it all go. His fight against Corassani in January is proof of that.

“I saw my shot and I was able to pull the trigger,” he said. “I had a great game plan after one of the first real fight camps I’ve ever had.”

Now he has to keep up the work if he wants to get to the Cerrone level of fights. He says he’s always fight-ready these days, and he knows that when he puts his money where his mouth is, he’ll need to pay up when the time comes.

“I tell (matchmaker) Sean Shelby that I’m always ready to take a fight,” he said. “But you can’t just say that. If he calls and you say no for whatever reason, that’s not good.”

If Sicilia can beat Meza, and that’s his plan, he believes he will get at least two more young “up and comers” before he gets a name opponent, but he’s willing to bide his time and wait his turn.

“I grew up in a blue collar town,” he said. “My father passed down blue collar values to me, and that’s the way I fight. I live in a small town and me, Julianna and Michael are all big fish here, and it’s real nice. You can’t go anywhere without seeing the UFC on television. It’s in every bar. We get a lot of support from the community. My goal is to put together a string, maybe headline one of these fight nights on FOX Sports by next year, then take it one fight at a time.”

Sicilia looks up to a few UFC veterans like Frankie Edgar and Dan Henderson because of that blue collar workmanlike quality he shares with them. He says those guys let their fists do their talking, but he also sees value in the Conor McGregor – Chael Sonnen way of over the top promotion.

“Somewhere in between feels right,” he said. “But the win streak has to come first.”