Sam Hughes Has Some Tricks Up Her Sleeve

Sam Hughes didn’t just wade into the UFC strawweight waters in her promotional debut last December — she ignored the rules about running around the pool, hit full stride, launched herself into the air and did a cannonball into the deep end, accepting a fight against Top 15 fixture Tecia Torres on a week’s notice.

“The fight with Tecia, I wouldn’t do anything different as far as taking the fight on short notice,” said Hughes, reflecting on her debut assignment as she prepares to make the walk to the Octagon for the second time this weekend against fellow prospect Loma Lookboonmee. “It was a wide-eyed awakening for me to step into the cage with a Top 10 contender, see what kind of pace that she had, and what level comes with being in the Top 10.”

Torres fought with a greater sense of urgency and confidence than she’d shown in recent outings, taking the fight to the newcomer from Jump Street. Though Hughes was on the business end of things for the majority of the first round, the 28-year-old hung tough, looking for ways to slow Torres and swing the fight in her favor.

Somewhere in the fracas, Hughes got poked in the eye, and when she returned to her corner following the opening five minutes, she informed her coach she could not see out of her left eye. Moments later, the fight was waved off.

“I took a lot of things away from her in terms of that pace and the output I need to have in order to step up and be where I want to be in this sport, which is the Top 10 and in a couple years, fighting for the belt,” Hughes said, breaking down the takeaways from a tough first night at the office. “It was a rough way to step in, but I wouldn’t do it any different; I’m happy with how everything turned out. It was a blessing in disguise.”

As much as no competitor likes to lose, it’s easy for Hughes to roll with the punches coming out of her encounter with Torres because of how quickly she’s risen to claim a place on the UFC roster.

“I have trained less time than Tecia has been in the UFC,” said the Wofford University alum, who ran track and cross country while completing her undergraduate degree before moving on to pursue her master’s at the University of South Carolina. “If you think about it and break it down like that, it’s like ‘Holy s***! That’s pretty unbelievable.’” 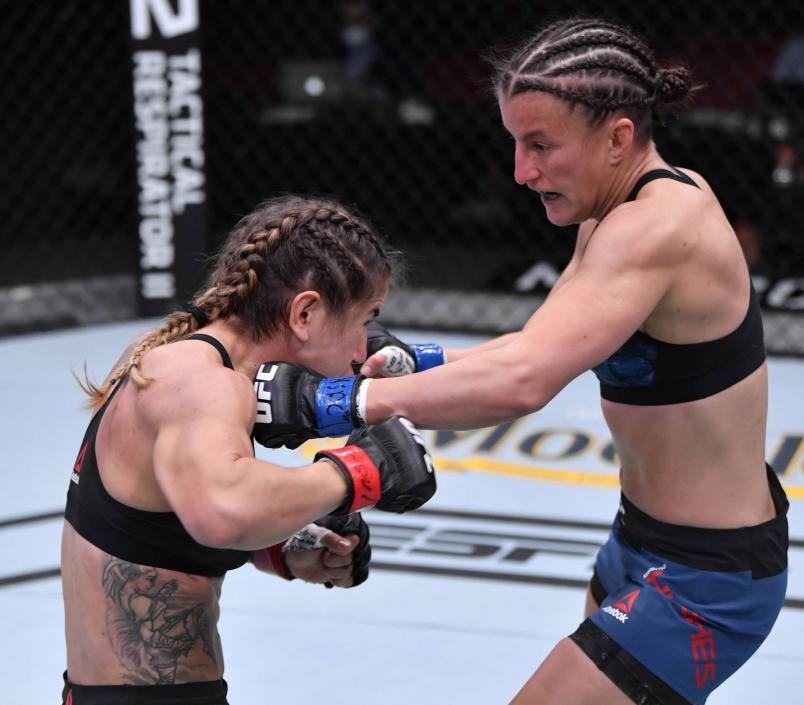 Four straight wins landed her a championship opportunity against Dana White’s Contender Series alum Vanessa Demopoulos under the LFA banner, where she came up short, but a quick return to the win column put her at the top of the UFC’s call sheet when the opening opposite Torres came up.

Being able to go from “zero to UFC” in less than five years is a massive accomplishment and speaks to both Hughes’ natural talent and the commitment she’s shown to her latest sporting endeavor.

“Being a D-I athlete takes sacrifice, discipline, time-management, so all those things, I’ve already dealt with for like 12 years because I ran in junior high, high school, and then college, so all those things were ingrained in my routine and daily habits, so the sacrifice has never been an issue for me.

“I’m very grateful and very happy that I had those experiences because the nerves of stepping in and seeing Tecia across the cage from me were nothing new,” continued Hughes. “It was just another thing for me where, ‘I’m going to give my best, she’s going to give her best, and we’re going to see who ends up at the finish line first.’

“I’m super-grateful for that kind of experience and I think it put me on the fast track to do something like this at the highest level, and I fully intend to be here for years on end.”

While the strawweight finisher knows her high school and collegiate athletic pursuits gave her a strong foundation to build upon when she walked into her first MMA gym and fell in love with the sport, Hughes also is quick to credit her coach, Eddie Grant, and woman’s MMA pioneer Barb Honchak for helping her reach the biggest stage in the sport in less than five years.

“I think the people that I’ve surrounded myself with have pushed me on this fast track, and working with Barb early on in my career helped to push me and grow so quickly,” began the Catalyst MMA representative, who was initially slated to face Emily Whitmire in February before the TUF 26 alum was forced to withdraw. “There was so much thrown at me so quickly that I either had to step up to the plate or quit, and I stepped up.

“I was like, ‘Let me just be a sponge for the next two or three years and get this high-level training’ and I think that my competition as an amateur and early on as a pro helps tremendously.

“There were months where I was getting my *** beat on a daily basis, which was awesome,” she continued with a laugh. “I’m so thankful to call Barb a friend and a training partner. Whenever she first came into the gym, I was in awe, like ‘the first Invicta flyweight champion is in our gym.’ She was so kind, so nice. 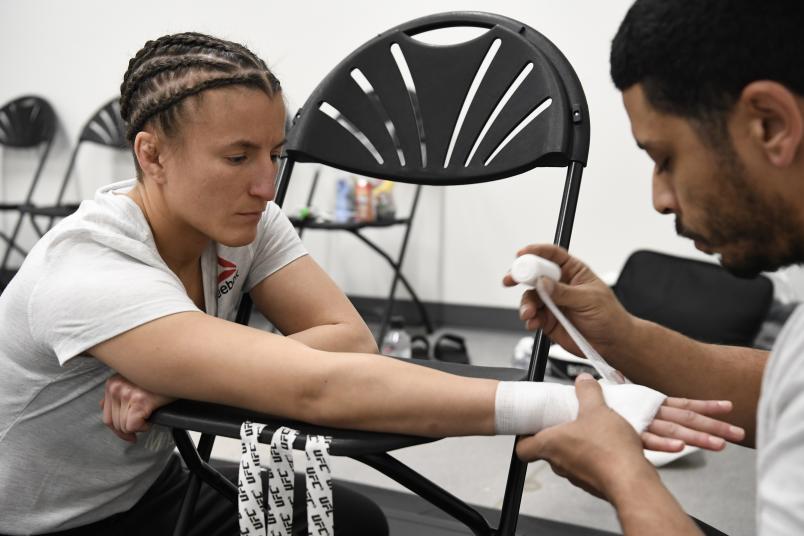 “Whenever the cage door closed, she was an ***hole and I loved every minute of it, but she really pushed me, and between her and my coach, I think those two made me who I am right now.”

Blending a little of that Honchak influence with her own aggressive style has helped Hughes make the rapid climb through the ranks and onto the UFC roster, and with her short-notice debut in the rearview mirror, “Sampage” is ready to really introduce herself to the UFC audience this weekend in Las Vegas.

“There is a different kind of confidence coming into this week,” admitted Hughes, who views Saturday’s fight with Lookboonmee as her true debut. “My fight camp has gone so well, I’m so happy with how everything has turned out — my weight is right on track, everything is where it should be and I’m antsy to step in that cage and do what I’m supposed to do.”

After getting tossed into the deep end right out of the gate, this weekend’s pairing with the 25-year-old Thai fighter is a more even, more fitting pairing for the LFA veteran.

Like Hughes, Lookboonmee is 5-2 in her MMA career after transitioning from Muay Thai. She too got an early introduction to a ranked competitor, landing opposite Angela Hill last February in her sophomore appearance in the Octagon after “Overkill” jumped at the chance to sub in for Hannah Goldy and fight for the second time in as many months.

Though she dropped a decision to Hill, Lookboonmee rebounded with a unanimous decision win over Jinh Yu Frey in her most recent outing, and this weekend’s fight feels like one designed to see which of these UFC up and comers will take a step forward heading into the second half of 2021. 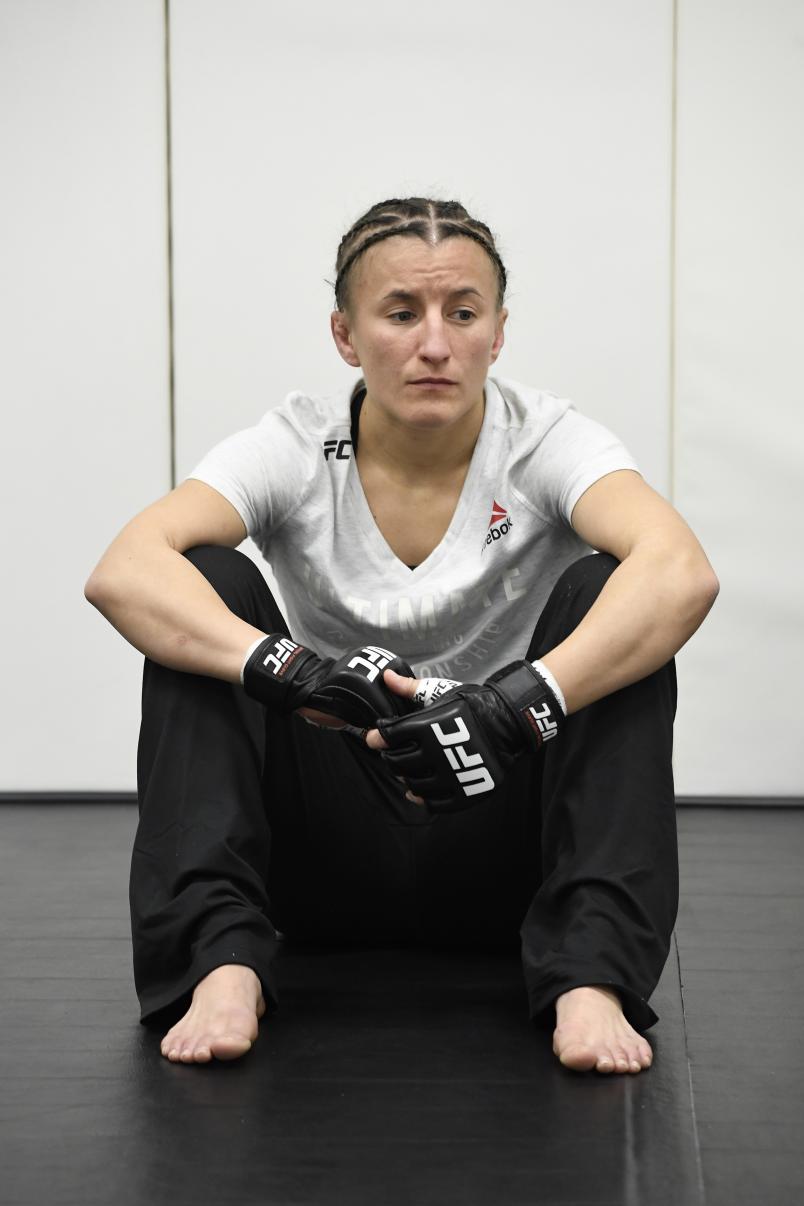 “I’ve got a lot of tricks up my sleeve and I’m excited to showcase them,” she added. “I don’t want to say too much, but it’s going to be a great fight. I hope everybody knows that I’m going to put on a helluva performance.”

Jumping into things on short notice back in December, Hughes knew she was at a disadvantage, but was happy to get her foot in the door.

This time around, however, the ultra-competitive former Division-I track athlete has had plenty of time to prepare and she pictures herself making a statement inside the Octagon on Saturday night.

“That’s all I’m thinking about.”