Strawweight Looks To Put Together A Win Streak vs Elise Reed Saturday In Las Vegas
By Thomas Gerbasi, on Twitter: @TGerbasi • May. 19, 2022

Five minutes into the most important fight of her pro MMA career, and Sam Hughes had seemingly dug herself a hole against Brazil’s Istela Nunes.

The April bout was the last one of the Iowa native’s UFC contract and her first with the Sayif Saud-led Fortis MMA team in Dallas. It also came after an 0-3 start to her time in the Octagon, and now she was a round down with two to go.

Panic time? Not for Hughes.

“I was not even fazed one bit,” she said. “Sayif came over and he was like, 'Hey, I need way more from you, and I need you to do this, this and this, I need you to stick to the game plan.' And I was like, 'Okay, no problem.' And I felt like ten more minutes was plenty of time to do exactly what I needed to do. So it was like I was just getting warmed up - it was like I just did two miles, and I'm ready for the next eight.”

Hughes knows all about warming up for two miles and then kicking into gear for the rest of a long race, having competed in the 5,000, 10,000 and 3,000m steeplechase distances in college.

She even ran a marathon. Accidentally.

“We were out for a long run of 18 miles and the group I was with got lost,” laughs Hughes, who actually wound up going over the 26.2 marathon distance to 28 miles. “That was miserable. It was out in South Carolina, and it was hot and humid. It's times like that where it's perfect because it pushes you more and you learn a little bit more about yourself.”

That’s what distance running can do for you. Like a fight, it’s nice to have the talent and technique, but if you don’t have that heart to push through the tough times, none of that matters.

“I like when you have to gut check and have to tap in to where you might feel super uncomfortable, but all right, who's got more guts right now?” said Hughes. “Honestly, I feel like it helped shape me as a martial artist and as a good UFC fighter. That cardio base and having those conversations with yourself at Mile 8 when you're in a half marathon or even a full marathon, it's like, 'Okay, you just gotta keep going. Keep charging through that fire and eventually it's gonna be over.' But a lot of people break, and so I think that training, that endurance distance running, really shaped me to be unbreakable and in the fire all the time.”

At this point, you can guess where this story is going. Hughes roared back in the next two rounds against Nunes and when the judges’ scorecards were tallied, she had a majority decision win and her first UFC victory. It’s a little disappointing that what followed was only a fried chicken sandwich and a couple beers, but that was more than satisfying for a fighter who earned her victory and a fresh start to her UFC career. And when she got home, she had some familiar faces waiting for her. 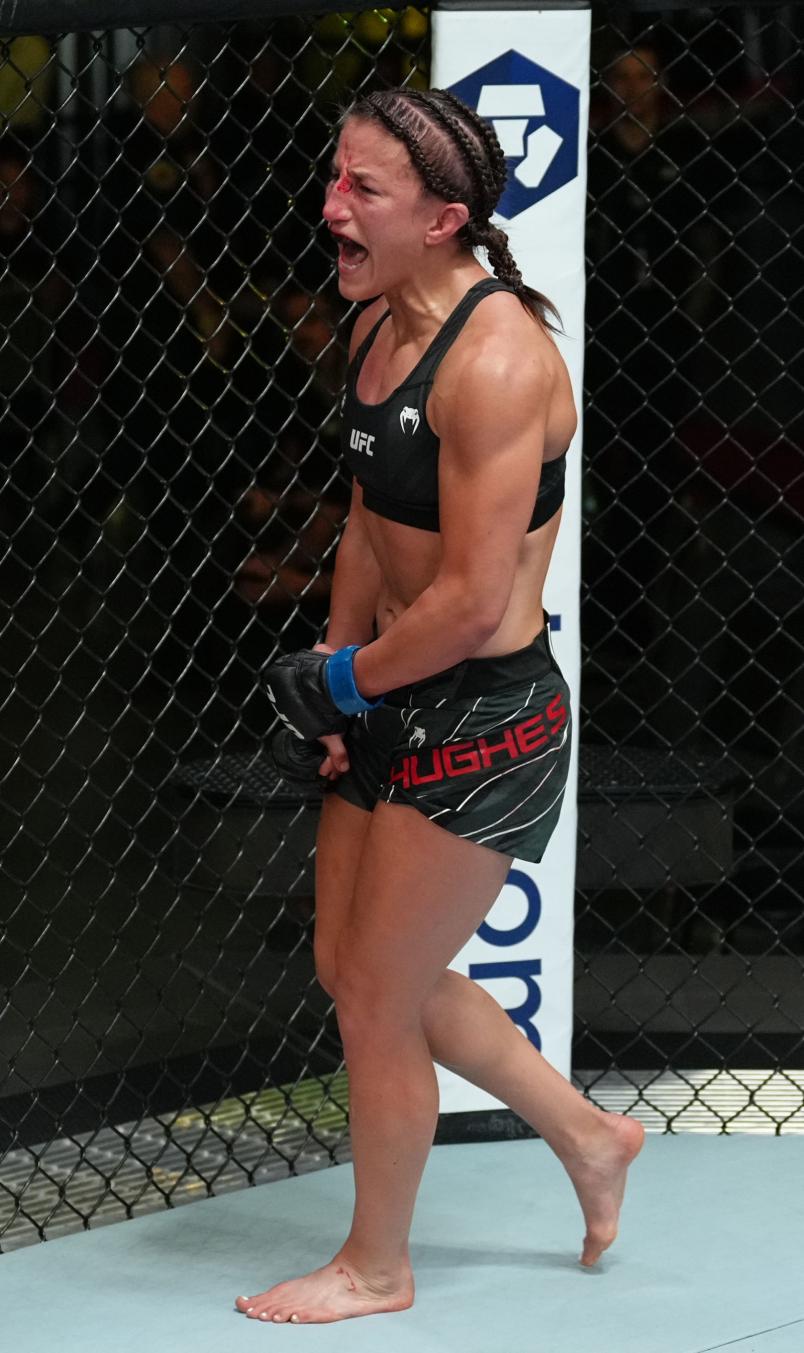 Sam Hughes reacts after the conclusion of a strawweight fight against Istela Nunes of Brazil during the UFC Fight Night event at UFC APEX on April 16, 2022 in Las Vegas, Nevada. (Photo by Jeff Bottari/Zuffa LLC)

“I lived up in Washington by myself, so after this win, it was the first time that my parents picked me up from the airport and I just got to be around somebody,” said Hughes. “Whether I won or whether I lost, I wasn't going home alone, so that was a nice sigh of relief. And then I got to be around them all day and we went out and hung out as a family. This is exactly what I was missing the whole time. I love being around family and having meals and watching TV together - it's the little things that matter to me, so I think that was, in part, the balance I needed to put back into my training and put back into me being in a healthy environment and happy.”

As for her new home in Dallas with the Fortis MMA squad, let’s just say that it is home now.

“I actually wanted to do it (make the move) a couple fights before, but I think my own pride got in the way, and I was loyal to the wrong people,” she said. “I knew I only had one fight left on my contract, and this was the time - I needed to do it now, because otherwise I was gonna ruin my career. After that last fight, I truly believe Sayif and coach Charles (Byrd) saved my career. I wouldn't have a second contract, I wouldn't be fighting this fight without them. So I'm truly grateful. I did find a home at Fortis and I'm not going anywhere.” 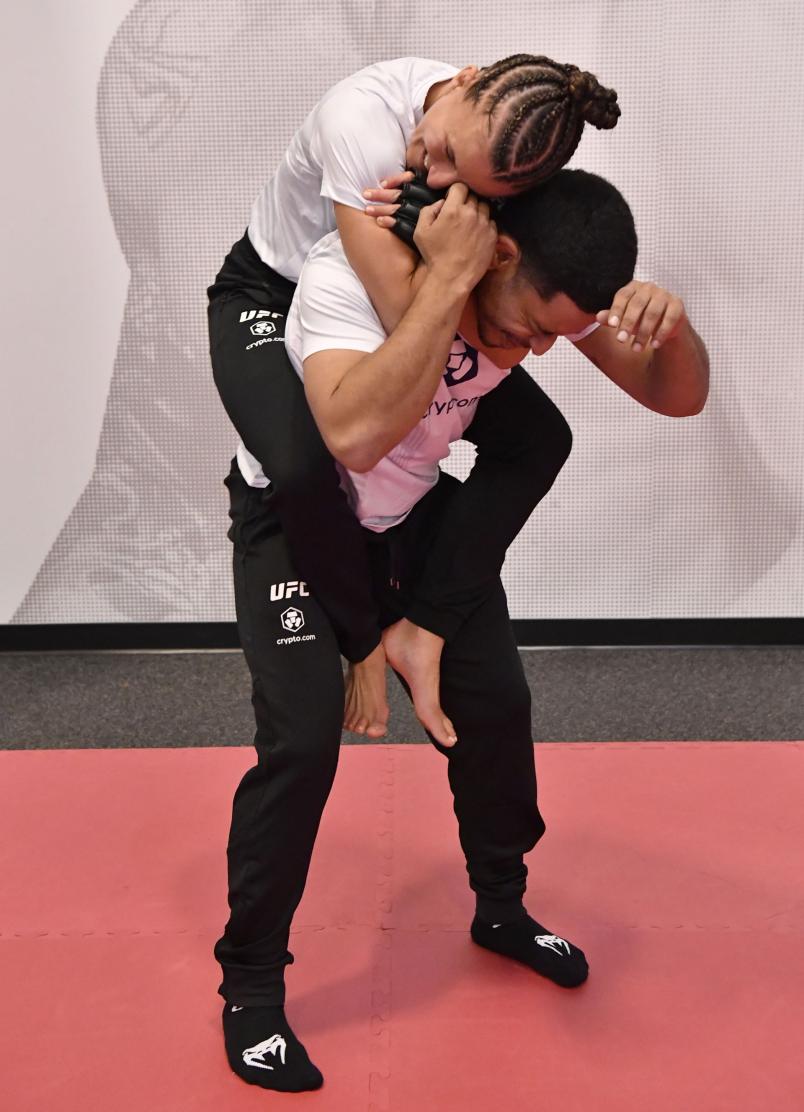 Sam Hughes warms up prior to her fight during the UFC Fight Night event at UFC APEX on November 20, 2021 in Las Vegas, Nevada. (Photo by Mike Roach/Zuffa LLC)

Yes, the 29-year-old strawweight will be sticking around after getting a new contract, and she’s going to be breaking it in this Saturday against Elise Reed. It’s another example why fighters are different than the rest of us. There was not going to be much celebrating after that chicken sandwich; it was back to work and she has no problem with the quick turnaround.

“I just love it,” Hughes said. “I felt so good coming off of that win that I didn't want to just ride on it for a couple months. I just wanted to get back in there and keep this train rolling because right now, I feel pretty unbreakable. Coach Sayif has got me really, really sharp, he's pushed my cardio, especially these last few weeks. I already thought I had really good cardio, but he's got me to the point where I want to throw up in training, and it's just been great.”

“It is a good thing,” Hughes laughs. “I feel so good, so sharp, so why stop now? Just keep this ball rolling.”

That’s a fighter talking, and after that biggest win in the biggest fight, Hughes is rightfully getting the biggest positive response she’s ever had.

“I've never gotten so much love after a win, ever,” she said. “It was nice. I felt like people were genuinely happy for me and I had a lot of people reach out and say, hey, I'm really glad that you made that move, I'm really glad that you decided to make the changes you need, you getting out of Washington was probably the best decision that you could have ever made. So stuff like that made me really feel good, and I do feel like people are backing me up, which is really nice.”