Sam Alvey: The Right Attitude all the Time 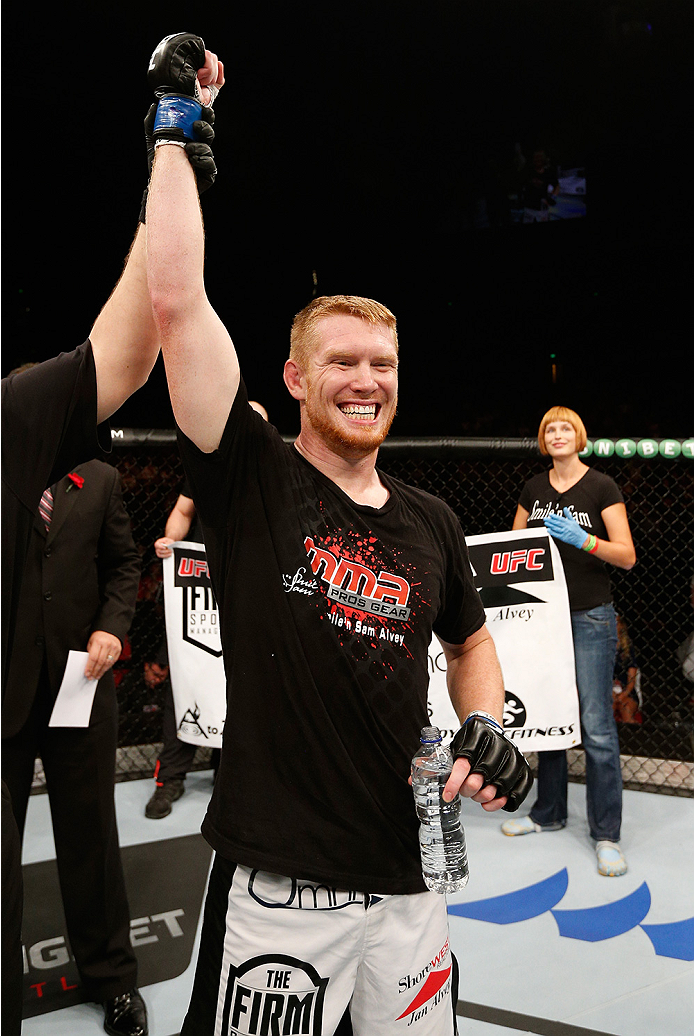 It’s hard to miss the smile of Sam Alvey, mainly because it’s always there. It’s even in his nickname, “Smile'N”. But smiles can often mask a darker side of life, pain that doesn’t want to be revealed to the world. So what better way to find out the truth than to ask whether he’s enjoying the ride, three fights into his UFC career.

“Sam Alvey is enjoying the ride,” he laughs. “It’s been a trip. I’ve been everywhere but home with the UFC and everywhere feels like home when I’m with the UFC. But I’ve been loving it so far.”

It’s almost poetic the way the 29-year-old describes life in the fight game, but in an insular world where you often have to wonder where the truth really lies, Alvey’s words ring of truth, and it’s the truth that only comes through years of toil in a sport in which if you don’t smile, you’ll often cry. It’s not an easy gig, especially as a husband and father, so while some of his peers might complain about having to travel to Trinidad, Mexico, New Zealand, Canada, Australia and Brazil for work, for Alvey that’s always been a perk of the job.

“Up until this point in my career, the highlight of fighting was being able to see the world, so I’m just used to it,” he said. “I can do it and I love showing my family the rest of the world too.”

This week, the Alvey clan will be in Adelaide, as Sam faces Daniel Kelly in a middleweight bout. Australia brings – you guessed it – a smile to Alvey’s face, as his first UFC win came Down Under last November, as he knocked out Dylan Andrews in a single round in Sydney. His last fight, another first round finish, this of Cezar Ferreira, came in Porto Alegre, Brazil in February, so the Wisconsin native isn’t too concerned about traveling long distances and fighting.

“The last time I fought in Australia, the time change really didn’t bother me,” he said. “When I came home I was a little jetlagged, but over there I was pretty good. The UFC takes care of me. I get over there and anything I need they get me access to. I have gyms to work out in, stores to get food in and bathtubs to cut weight in. So I get over there and I try to keep my habits exactly the same as they are over here (in the United States).”

In the States, there are no easy days, as Alvey trains with the Team Quest squad in Temecula, California that is led by a man he holds in high regard, former PRIDE and Strikeforce champion Dan Henderson.

“Dan Henderson is a leader,” Alvey said. “He built his gym and he built a gym to train fighters. He didn’t build it for himself, he built it to train the next generation, and he’s leading the way. We have some of the most amazing coaches in MMA right now. If you were to say every gym has its super pros, right now Team Quest has five or six super pros, but we have a lot of guys that are just under the radar and those are the guys that are helping me get ready for every UFC fight, and I’m helping them get ready for their fights. So he (Henderson) goes out of his way to make sure everybody in the gym has the best coaches possible.”

And where does Mr. Alvey sit on the super pro list?

“I’m doing all right for myself,” he laughs. “Honorable mention.”

He’s come a long way since 2012, when he competed on season 16 of The Ultimate Fighter. It was a much-maligned season, with only finalists Colton Smith and Mike Ricci competing on the season finale card. Neither are on the UFC roster anymore, but fighters like Alvey, Neil Magny and Igor Araujo have carved a place out for themselves in the big show, and the way Alvey sees it, better late than never, and now he’s looking to send a message to other TUF alums.

“My season didn’t do that well post-filming,” Alvey said. “There are a couple of us doing okay, but even me, it took two years to get back in the UFC. Neil’s just been crushing it, so more power to him. But my goal right now is that I want to be the TUF killer. I should have waited one more season and done 185. I would have won that (TUF 17) tournament. So right now, one at time, I’m gonna take out 185-pound TUF members. Daniel Kelly is a TUF member, Cezar Ferreira, he was a TUF member, so was Dylan Andrews, and I’ve got a couple more I want to take out and I think the next one is Luke Barnatt. I’m gonna knock him out too. The only problem with him is (Mark) Munoz is gonna beat him first (on May 16), and he’ll be damaged goods by the time I get to him. Munoz will submit him, I’ll knock him out – we’ll make sure he knows what’s happening to him. And he’s probably a great guy (Laughs), I just know he’s next on my list.”

Even when Alvey is attempting to call people out he can’t stop smiling, so while this week’s opponent – Kelly – is the next fighter in his way, he only has good things to say about the four-time member of the Australian Olympic judo team.

“If you look back at Daniel Kelly’s debut in the UFC (against Luke Zachrich), he looked on fire,” Alvey said. “His hands were where they needed to be, his judo was on point and he dropped his opponent then submitted him and it was beautiful. And I fought Dylan Andrews on that card and I got to talk to Daniel backstage and he seems like a great guy. I enjoyed speaking with him and I’m going to enjoy fighting him. But that’s the fighter that’s going to be here this time. He’s coming out because that last fight (a decision win over Patrick Walsh in February) wasn’t him. He’s going to come out better than the UFC’s ever seen before because I’m sure he wants to prove a point.’

So does Sam Alvey.

“My overall look at fighting is the same as it’s ever been – I’m only as good as my next fight, so I’ve got to go out there and really keep solidifying my standing in the UFC and make sure they know that they didn’t make a mistake when they hired me,” he said. “I’m gonna go out there, I’m gonna put on a helluva fight, and I’m gonna make some fans doing it.”