With the name Boston Salmon, odds were pretty good that no one was ever going to forget the Hawaiian bantamweight who punched his way to a UFC contract with a win over Ricky Turcios on Dana White’s Tuesday Night Contender Series on July 11.

At least if you’re not from New York.

“Eighty percent of the comments I get are good and 20 percent might be bad from people in New York because they have a rivalry with Boston,” he laughs. “I like the name, I think it’s unique. I’d say about five of the kids that grew up in my community took that name after me as well, so that’s pretty cool.”

Yet with the way Salmon fights, even diehard Yankee fans can put their Boston bias aside and find something to cheer for in the 26-year-old from Waianae, a fighter who has been on the radar of diehard fight fans long before last month’s win.

“After my amateur fights, I knew I was a prospect, but it didn’t really hit my mind until people started talking about it,” Salmon said. “It was kind of a long journey for me. I knew I’d eventually get there, but I couldn’t really stay healthy and couldn’t really stay active and get the fights I needed to. Every time we’d get a fight, my opponent would pull out, or we’d get fights and they would fall through, so it was harder for me to stay active and build up my record and get to the UFC.” 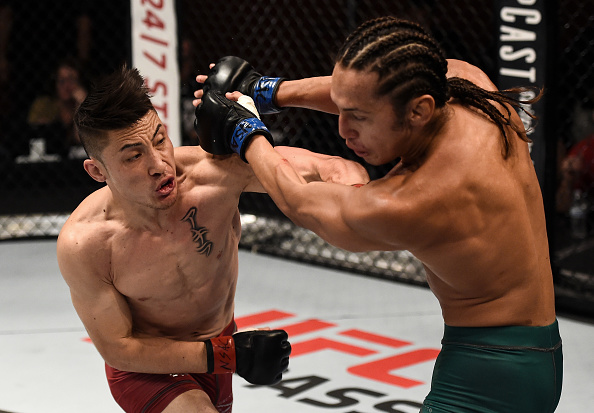 Add in a long amateur boxing career that had him on the verge of competing for a spot on the 2012 U.S. Olympic team, and we’re talking about someone who has had gloves of one sort on for most of his life. And though boxing was the initial love, MMA was what eventually pushed the sweet science out the door.

“It came to the point where I didn’t have the love for the sport (boxing) anymore,” he said. “I had been doing it since I was a kid, I’ve traveled around the world competing in boxing, and it came to a point where it didn’t feel right being in the gym. I would half-ass it and not give it a hundred percent. That’s when I made the decision that I needed to try another sport.”

Given Salmon’s striking prowess and a history of wrestling in high school, his father thought MMA would be the perfect fit, so he bought his son a three-month membership at the TapouT Gym in his adopted hometown of Las Vegas.

“I didn’t know if it was going to work out for me, but since then I fell in love with the sport,” said Salmon, who made his amateur debut in 2013 and then turned pro in 2014. By then, the buzz was already getting loud.

“When I was 3-0, I got a phone call from my manager saying I could potentially get a UFC fight, and it didn’t happen, but I knew I was on their radar,” he said.

Getting fights to push him over the top wasn’t easy, though, and a controversial split decision loss to Zac Riley last September didn’t help, putting him in an awkward spot as he was either the guy with the target on his back or the one avoided altogether. It was a frustrating time, but all that disappeared in the space of 15 minutes as he defeated Turcios and earned that UFC contract.

Many who have followed his career will say it’s a long time coming, and Salmon does fight like someone who won’t need a lot of seasoning and careful matchups on the way up the 135-pound ladder in the UFC. So is he ready for this? Oh yeah, he’s ready.

“If (UFC matchmaker) Sean Shelby called me right now and asked me who I want, I’d pick the toughest fight,” Salmon said. “Obviously I can’t call out Cody Garbrandt, but give me John Lineker. I know I can beat these guys in the top ten. I’ve been training for that, I’m destined for it, and I believe I have the experience and the potential to beat these kids at that weight.”