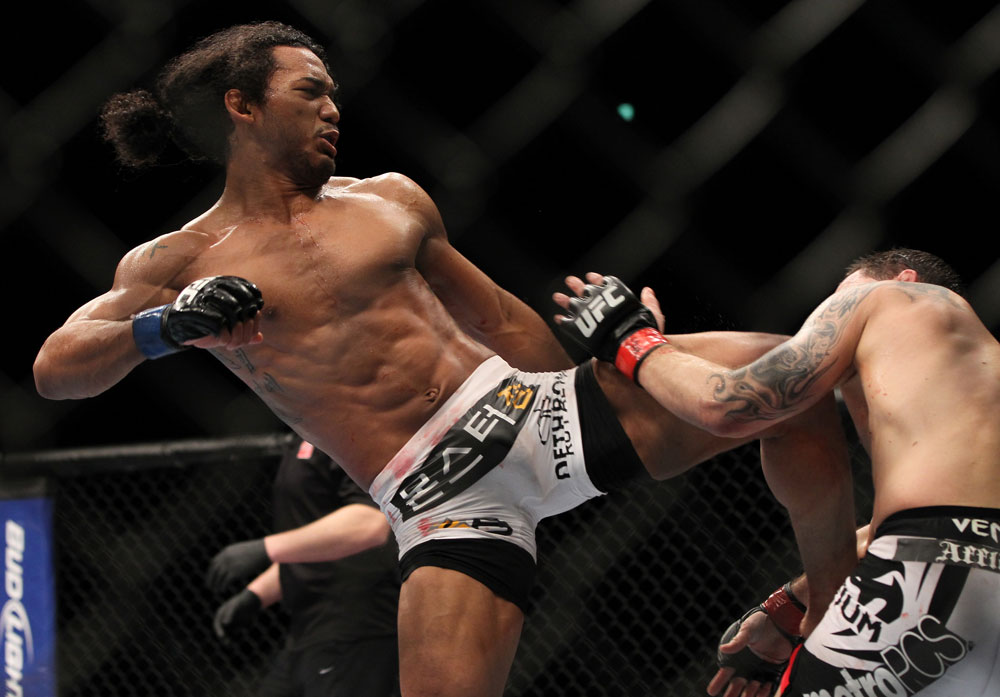 Opened in 2000, Saitama Super Arena in Saitama, Japan certainly lives up to its billing as one of the world’s greatest venues for sports and entertainment viewing. Sporting a unique ability to move sections of seating to accommodate large or small events, the venue also holds a special spot in mixed martial arts history as home to some of the sport’s greatest fights.

This Friday, the UFC will return to the arena for the fifth time with a card headlined by the light heavyweight bout between Ovince Saint Preux and Yushin Okami. But before this pair attempts to mark their place in Saitama Super Arena’s storied history, we’re going to take a look back at this venue’s “Super” seven.

Don Frye-Yoshihiro Takayama
June 23, 2002
PRIDE 21: Demolition
Result: Frye TKO1
UFC FIGHT PASS subscribers: Click here to experience it again
Known more for his pro wrestling exploits than his mixed martial arts game, Yoshihiro Takayama lost each of his four mixed martial arts bouts, but on this night in June of 2002, he cemented his spot in MMA lore with this slugfest against former UFC star Don “The Predator” Frye. A staple of highlight reels from the time the two faced off in an unforgettable staredown, Frye and Takayama literally threw caution to the wind at the bell, locking up and throwing punch after punch at each other at close range for what seemed to be forever. It was a glorious forever though, and the funny thing is, while Japanese crowds are known for being almost eerily polite and quiet, they erupted for this one. Frye would win via TKO, but this may be the one fight that you remember not for its finish, but for its beginning.

Mauricio “Shogun” Rua-Antonio Rogerio Nogueira
June 26, 2005
PRIDE Critical Countdown 2005
Result: Rua W3
UFC FIGHT PASS subscribers: Click here to experience it again
Just 10 fights into his mixed martial arts career, Mauricio “Shogun” Rua was nonetheless in the middle of the year that would make his a superstar, and his three-round war with countryman Rogerio Nogueira would be the centerpiece of a 2005 campaign that saw him defeat Hiromitsu Kanehara, Rampage Jackson, Nogueira, Alistair Overeem, and Ricardo Arona. If you called it the greatest year ever put together by an individual fighter, few would dispute it, and in the Nogueira fight, he had a willing foil in the quest to give fans their money’s worth. Containing high-level action from start to finish, this was the fight that saw Shogun grow up and Nogueira cement his place as well as one of the top light heavyweights in the sport.

Fedor Emelianenko-Mirko Cro Cop
August 28, 2005
PRIDE Final Conflict 2005
Result: Emelianenko W3UFC FIGHT PASS subscribers: Click here to experience it again
Perhaps the most eagerly anticipated fight in PRIDE history, European superstars Fedor Emelianenko and Mirko Cro Cop finally met in August of 2005, after two years of starts and stops. Well, the wait was worth it. With Emelianenko’s PRIDE heavyweight title on the line, Cro Cop was his usual punishing self early on, breaking the champion’s nose and bruising his midsection with thudding kicks. The resilient Emelianenko took everything and kept marching forward, and though many assumed that march was to an eventual defeat, he had other plans, going toe-to-toe with Cro Cop and getting stronger as the fight progressed. By the end of three rounds, there was no doubt who the winner was, as Russia’s “Last Emperor” retained his crown.

Takanori Gomi-Hayato Sakurai
December 31, 2005
PRIDE Shockwave 2005
Result: Gomi KO1
UFC FIGHT PASS subscribers: Click here to experience it again
When talking to Takanori Gomi before his UFC debut in 2010, he described his 2005 knockout of Hayato “Mach” Sakurai as “the greatest moment in my life as a fighter.” That’s not surprising, given Sakurai’s iconic status in the sport in Japan and the fact that Gomi won the PRIDE Lightweight Grand Prix and its first lightweight title with the victory. But maybe it was the way he won that was so memorable, using a ferocious ground and pound attack to soften Sakurai up for the standup finish moments after the two got back to their feet. This was definitely one for the time capsule.

Mirko Cro Cop-Wanderlei Silva
September 10, 2006
PRIDE Final Conflict Absolute
Result: Cro Cop KO1
UFC FIGHT PASS subscribers: Click here to experience it again
In what was probably the last great PRIDE event held at Saitama Super Arena, two of the sport’s most feared strikers met for the second time. The first time Mirko Cro Cop and Wanderlei Silva threw hands in 2002, the result was an unsatisfying draw. The second time around, the judges didn’t need to get involved, as Cro Cop put on one of his most spectacular performances, showing no regard for the Brazilian’s berserker attack as he marched forward with a punishing attack that eventually ended matters at 5:26 of the opening round. What was even more impressive about this night was seeing Cro Cop fight once more, defeating Josh Barnett later that evening to take the 2006 Openweight Grand Prix title.

Frankie Edgar-Benson Henderson I
February 26, 2012
UFC 144
Result: Henderson W5
UFC FIGHT PASS subscribers: Click here to experience it again
Frankie Edgar and Benson Henderson could fight a hundred times and each bout would like the last in terms of action, pace, and the inability to separate one from the other. Some pairs will just always produce memorable fights, and in their two battles, “The Answer” and “Smooth” didn’t just leave the fans happy; they left them debating who the true victor was. In their first matchup in Japan, it was Henderson nearly stopping Edgar in the second round with an upkick, but the gritty battler from New Jersey roared back to nearly pull off the win before the judges ruled the former WEC champion the new UFC lightweight champion.

Wanderlei Silva-Brian Stann
March 3, 2013
UFC on FUEL TV
Result: Silva KO2
UFC FIGHT PASS subscribers: Click here to experience it again
No one wants to leave on a loss. Of course, that’s usually how it goes in the unforgiving world of combat sports, and Brian Stann’s last bout was no different. But the way you go out says a lot, and if you’re going to have your last fight be a defeat, you want it to be in a fight that fans will never forget. That was most definitely the case in March of 2013, when Stann and former PRIDE star Wanderlei Silva engaged in a savage slugfest that saw multiple knockdowns, endless haymakers, and a general disregard for personal safety. Silva emerged victorious in the second round, but as Stann said in UFC magazine after his subsequent retirement, “I can live with losing, as long as I tried to win.”

Fighters reflect on the historic venue...

“I’ve never been in Japan,” Joe Lauzon told me in 2014. It’s a running joke between him and his buddies, mainly because the man tied with Nate Diaz as the UFC’s All-Time bonus king doesn’t want to remember his lone appearance at the Saitama Super Arena in 2012 against Anthony Pettis, a bout the New Englander lost by first-round knockout. But all kidding aside, Lauzon can appreciate fighting in the legendary venue.

“It was awesome to fight in the same place where they had all those PRIDE fights and that part was incredible, but obviously because the fight didn't go well it seemed like a bad experience,” he said, noting that as soon as he got there, he knew he was someplace special.

“It's the Saitama Super Arena, it's not the Saitama Arena,” he said. “It was incredible. So many legendary fights happened there and you can feel the history that's taken place there, for sure.”

So is it true about the place being as quiet as a church on fight night?

“It’s very, very quiet,” said Lauzon. “It's surreal. It's almost like walking into a gym where there's like a bunch of those fatheads on the wall, and everyone's watching but they're not saying a word because they're not real people. (Laughs) It was definitely cool, but it was just different. If you fight anywhere else, the crowd's going crazy. I keep hearing from everyone about how the Ireland crowd (for UFC Fight Night in 2014) of less than 10,000 people sounded like it was more than 50,000 in Toronto for GSP (Georges St-Pierre). In Japan, it's the complete opposite. If you put two Irish guys in the top balcony on opposite sides of the arena, they'd be screaming at each other and you would hear them clear as day.”

Takanori Gomi on his home away from home

With nine fights in the Saitama Super Arena for PRIDE, Sengoku, and the UFC, and a tenth on the way this week against “Maestro” Dong Hyun Kim, Takanori Gomi can almost call the building his home away from home. Yet “The Fireball Kid” isn’t jaded yet, equating a fight in the venue to a boxer fighting in Madison Square Garden or a baseball player taking the field in Yankee Stadium.

“Capacity-wise, Saitama Super Arena is one of the biggest indoor arenas in Japan and it is considered as the ‘Mecca’ of MMA in Japan,” he said. “To fight at the venue is every fighter’s dream in Japan.”

It certainly was for Gomi who, in only his second fight there, in December of 2005, took on one of his heroes in Hayato “Mach” Sakurai.

“He is the fighter I always looked up to and admired throughout my career,” he said. “I got a chance to fight against him and was victorious. I can’t explain in words, but it was a very special moment for me.”