If you look at Ovince Saint Preux’s timeline on Twitter (@003_OSP), there is a tweet pinned to the top of his feed that tells you everything you need to know about his mindset heading into Saturday’s UFC 197 main event.

Un-der-dog (noun): a competitor thought to have nothing to lose but everything to gain.

Some hashtags follow the tweet from April 6, just days after the UFC announced that the No. 6-ranked fighter in the light heavyweight division would replace Daniel Cormier in a battle against Jon Jones with an interim title hanging in the balance. One of several promotional posters for this weekend’s event is embedded as well, but it’s the definition torn from the pages of Webster’s that carries the most weight.

“I knew they needed a replacement and if you look in the 205-pound division, especially in the Top 10, I was the only guy that was there,” Saint Preux says, explaining how he became the man to welcome Jones back to the Octagon this Saturday. “It’s something that we’ve always talked about.

“My trainer always thought that I would match up very well against Jon and that was another good reason to actually take the fight. When they threw the interim title in there, if I was walking around at 280 (pounds), I would have found a way to make it to 205.”

The Haitian-American fighter laughs, and the statement is extra comical knowing that Saint Preux got the call to take the fight while sitting in the drive-thru at Kentucky Fried Chicken.

“I was out running errands and needed something quick to eat. I was getting some grilled chicken, that’s it; I was trying to keep it more to the healthy side,” admits Saint Preux, who thankfully was nowhere close to being 280 pounds.

In these situations, fights where unheralded competitors are thrust into the spotlight at the 11th hour and given little chance of finding success, fans and observers often look to parse every word, every action, every movement the underdog makes, searching for tells and trying to figure out where they’re at mentally as they prepare for physical confrontation.

Over the last few hectic weeks that he has been readying for this impromptu title shot and thrust into the media spotlight on short notice, Saint Preux has maintained the same attitude and offered the same thoughts on what is about to transpire, one that falls in line with the tweet pinned to the top of his timeline.

“My thing is not to let the pressure get to me,” the former University of Tennessee football player explained. “When it happened, the next morning, my coaches and I sat down and came up with a game plan and, to be quite honest, this is an opportunity. 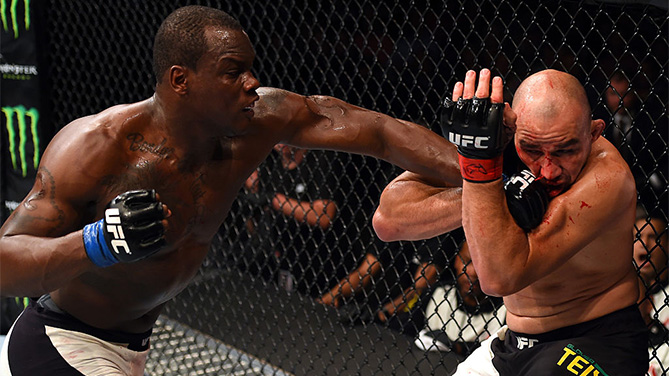 Don’t mistake Saint Preux’s mellow demeanor for the approach of a man resigned to being on the business end of things this weekend. This is a fight “OSP” is confident he can and will win, and he’s taking all the steps needed to give himself the best opportunity to shock the world on Saturday night.

From a tactical standpoint inside the cage, the 33-year-old Knoxville resident believes his unorthodox, no-style style will play a major part in determining the outcome of this fight.

“It’s definitely about me being unorthodox, and the way my coach goes about doing things, he thinks outside the box,” Saint Preux says of his head coach, Eric Turner. “All of my fights have been something that have kind of been outside of the box. Every time I finish fights, it has always been with something fashionable that gets people talking about it.

“I’m unorthodox and our gym is unorthodox, and in order to beat a guy like Jon, you need an unorthodox fighter,” adds the man who collected a submission by Von Flue choke over Nikita Krylov and earned a stoppage over former light heavyweight champion Mauricio Rua after dropping him with a short left hook while stepping off center as “Shogun” pressed forward.

As for outside of the cage, the laid back light heavyweight keeps things simple and he will take the same approach to this fight as he has all the others, despite the elevated stakes.

“Just stay focused,” he says, explaining his approach to fight week. “I appreciate all the phone calls, I appreciate all the support, but when it’s time for me to do something, my team and I, we get in a shell and that’s grind time for us and we can’t let anything outside the shell affect us.

“So it’s just about accepting things as they come along; let family and friends know that talking time is over and not letting a billion people in your room to come hang out with you.”

That includes his Omega Psi Phi fraternity brothers, whom he credits for getting him to where he’s at today.

“It’s one of the biggest influences in my life. Without them, I probably wouldn’t be doing what I’m doing right now because it was one of my fraternity brothers that got me introduced to mixed martial arts. (There will be a lot of them at the fight), but I gave them restrictions too, like, ‘After this time, don’t talk to me and don’t try to call me because I’ll hang up.’”

Because at the end of the day, underdog or not, this is the moment Saint Preux has been preparing for since he started his career eight years ago, and the scrutiny, the disbelief and the shutting out of friends and family will all be worth it when he stands in the center of the Octagon on Saturday night, his hand raised and UFC President Dana White wrapping the interim light heavyweight title around his waist.

“It’s been tough,” Saint Preux says of his condensed camp and mixing in a heavy dose of media obligations. “I might want to ball up in a shell and scream, but at the end of the day, the end result is getting my hand raised and that’s all that matters.”