Saidyokub Kakhramonov Prepared To Do It The Hard Way

It’s been an interesting 12 months for Saidyokub Kakhramonov. First, the bantamweight prospect got a short notice call to make his UFC debut against Trevin Jones last August.

The only problem was that he was at home in his native Uzbekistan when he got that career-altering phone call. So, he cut off his vacation and began his 20-hour trip back to the United States. But he missed his flight, then lost his luggage in Moscow. Eventually he made it to Las Vegas but missed weight by two-and-a-half pounds.

No worries, as he submitted Jones in the third round. A star was born, but when he got ready to make the walk for the second time against Brian Kelleher in January, COVID-19 protocols took him out of the fight. On Saturday, he’ll try again when he faces Ronnie Lawrence. 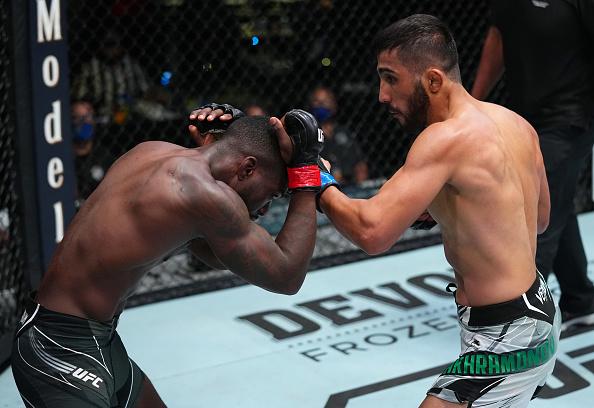 Saidyokub Kakhramonov of Uzbekistan punches Trevin Jones of Guam in a bantamweight fight during the UFC Fight Night event at UFC APEX on August 21, 2021 in Las Vegas, Nevada. (Photo by Chris Unger/Zuffa LLC)

Are his fingers crossed?

“I'm so used to these things in my life, I never had anything easy,” said the 26-year-old. “Everything I had in life, everything comes the hardest way possible. Nothing ever came easy, so at this point, I'm so used to it.”

It wasn’t even easy for this training camp, as missing the Kelleher fight made him reevaluate his training situation in California, or more accurately, the cost of living in California. He also considered moving to the Midwest, but that was a no go, either.

“My hometown where my parents are is in Chicago, but while there's good gyms, I live so far from everything,” Kakhramonov said. “You drive 45 minutes to one gym, 45 minutes to another gym. I just couldn't do that anymore. I'm already tired, I don't want to drive.”

Next stop, Spokane, Washington, and the Warrior Camp. 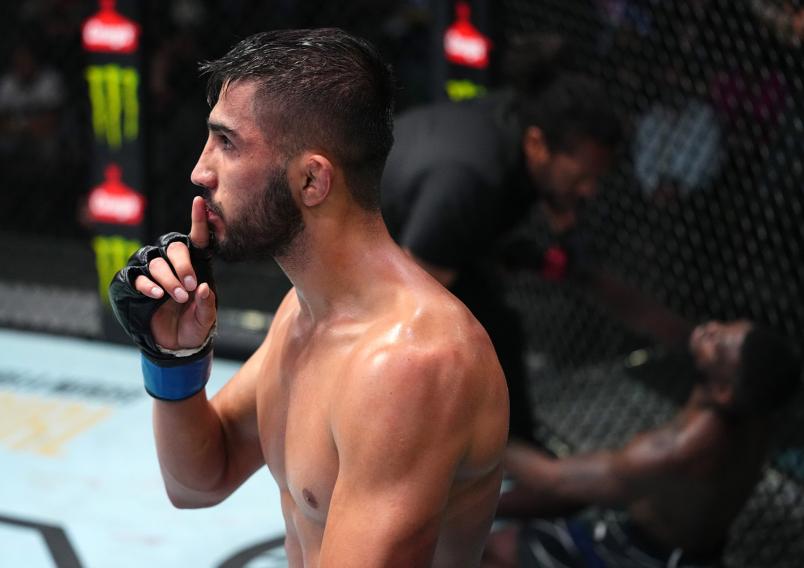 “In Spokane, it's a small town, it's a good gym, and coach Pablo Alfonso helped me a lot,” he said. “He takes care of me, it's cheap to live out here and it's good training at high elevation. And there's no distractions out here. It's just me by myself and I'm locked in, and I just train and try to get this money.”

Another UFC fighter joining him on that quest is lightweight rising star Terrance McKinney. It’s the perfect pairing of two prospects chasing the same goals, and when they’re not throwing punches at each other, they’re talking about their bright futures in the Octagon.

“That's all we talk about,” Kakhramonov said. “Every time he comes to the gym, Terrance has this charisma, and he's like, 'Man, we gotta take over.' He always hypes me up, he says, 'You look sharp,' and I do the same thing, too, but I always push him. Everybody is so good around him, but I'm the opposite. I give him s**t all the time. (Laughs) ‘You gotta train more, you gotta run more.’ But we're always helping each other out, we're talking all the time, and I tell him, ‘Yeah, one day we're gonna hold these belts together.’ We're always having this conversation with each other. Terrance is a good dude. He’s a good dude to spar with, we train together, he's strong, he's big. And we do talk about our plans a lot.”

But what do those sparring sessions look like? Pay-per-view worthy?

“Those fight rounds, it's like kung fu masters, spinning, dodging and some crazy stuff going on out there because I already know what he does, he knows what I do, so it's amazing to spar with him,” he said. “The sparring with him is fun.” 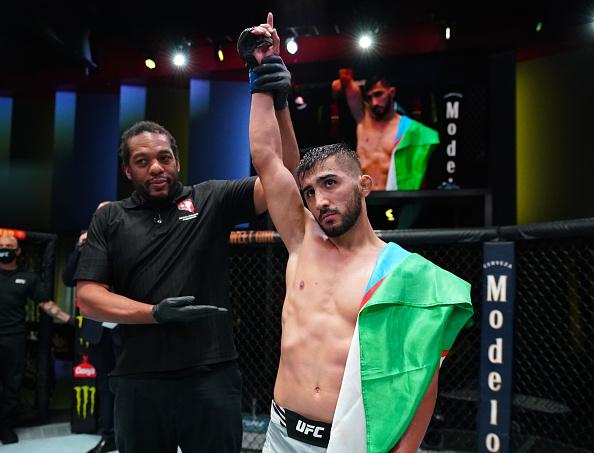 Clearly settled in his new training home, Kakhramonov can now focus on the next step in his UFC journey, and that’s this weekend’s meeting with Lawrence, who is 2-0 in the Octagon since his win on Dana White’s Contender Series in 2020. It may be an even better matchup than Kakhramonov-Kelleher, and the Samarkand native agrees.

“Actually, it worked out perfect for me,” he said. “This guy, Ronnie, I just love this matchup so much. I remember watching him on Dana White's Contender Series, and you know how before the fight, Dana does the 'If you don't know, now you know' thing? He called him special. And I'm like, man, he's not special. Let me tell you that and I'll prove it. He's not special. I'm gonna finish this guy.”

Who knows, he may just end up on the UFC President’s pre-event preview video this weekend.

“I tweeted about that two years ago,” said Kakhramonov. “I said, ‘One day, Dana's gonna say, ‘If you don't know, now you know,’ and he's gonna mention my name.”