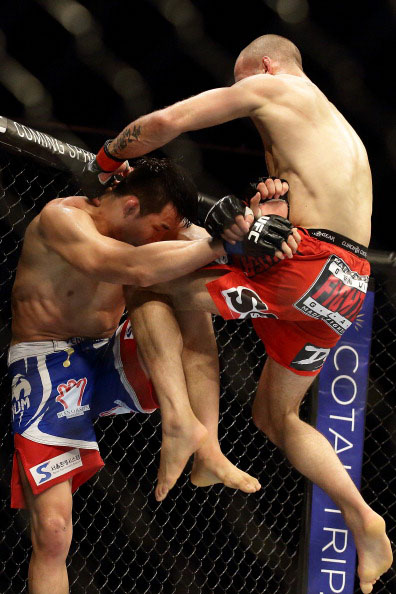 Former Strikeforce champion Tarec Saffiedine showed off all aspects of his fight game in his UFC debut Saturday at the Marina Bay Sands in Singapore, and when the UFC Fight Night main event was over, his five round unanimous decision win over gutsy South Korean Hyun Gyu Lim sent a message to his peers at 170 pounds that he’s ready for the best the welterweight division has to offer.

Saffiedine effectively picked at Lim with his punches and kicks in the early going, mixing in plenty of movement and switching of stances to throw his opponent off. Lim did score a flash knockdown with a right hand at the midway point of the round, and as the final minute wound down, he got in more shots, prompting a smile to appear on his face.

A firefight broke out in the opening minute of round two, and Saffiedine got the better of the exchanges, knocking Lim back on his heels twice. After settling to a more measured pace, Saffiedine went back to firing off hard leg kicks while moving smoothly back upstairs with his punches, frustrating Lim, whose return swings found nothing but air as the stanza progressed.

Lim got back on track early in the third, but a right hand by Saffiedine produced a quick knockdown, and the Belgium native scored with a takedown moments later, putting “Sponge” in control once again. After the two rose, Saffiedine unleashed more leg kicks, visibly hurting Lim and putting him on the deck. Saffiedine followed Lim to the mat but was unable to finish. Instead, he used his ground strikes to maintain control. With 30 seconds remaining, referee Leon Roberts stood the two fighters, and Lim was dropped once again with a leg kick just before the bell.

Surprisingly, Lim was able to make it out of his corner for round four, and he aggressively fired off lefts and rights in a last ditch effort to turn things around. Not surprisingly though, Saffiedine kept his cool, and with a flying knee to the head he scored another knockdown. Now showing off his ground game, Saffiedine looked for a rear naked choke and a triangle choke briefly, all the while throwing in enough strikes to keep the fatigued Lim on the defensive.

The gutsy Lim still moved forward, throwing all the while, but with each kick to the leg, Saffiedine regained the upper hand. With two minutes left, a shot to the left leg produced yet another knockdown, and this time Saffiedine let Lim up, looking to finish matters on the feet. Lim let out a war cry when he rose, and he marched forward with his hands down, hoping to goad Saffiedine into a brawl. He nearly got his wish, and he rocked Saffiedine in the closing seconds, only to have the bell intervene and halt his comeback effort.

Things began well enough for unbeaten Sean Soriano against longtime Japanese star Tatsuya Kawajiri, but eventually, “The Crusher” became “The Crusher,” submitting the American in the 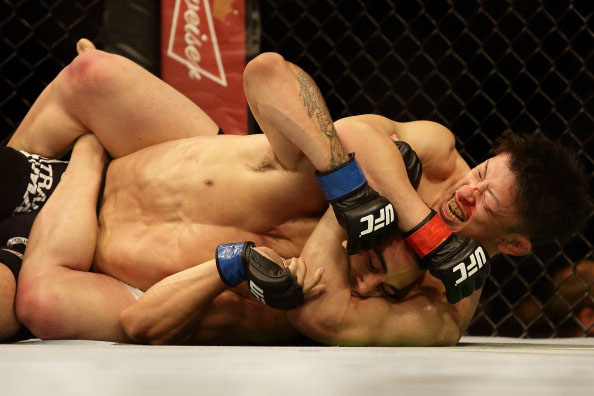 second round of their featherweight bout, making an immediate statement in his UFC debut in the process.

Soriano got off to a good start with his striking and takedown defense, but you can’t hold off Kawajiri forever, and with a little over two minutes gone, the Ibaragi native got his first takedown. Soriano didn’t stick around long, getting right back to his feet, but Kawajiri stayed close, getting Soriano to the mat once again and this time taking his back, where he pounded away with ground strikes until the end of the round.

Kawajiri got the takedown a lot easier as the second frame opened, and once he got Soriano to the mat, he took the back and sunk in a rear naked choke that produced a tap out and the finish 50 seconds into round two.

With the win, Kawajiri, a former PRIDE standout at lightweight who is now unbeaten in five fights at 145 pounds, improves to 33-7-2; Soriano falls to 8-1.

Hear from Kawajiri after his win

What was shaping up to be an interesting welterweight matchup between UFC newcomers Kiichi Kunimoto and Luiz Dutra instead ended prematurely after Dutra was disqualified.

A competitive start to the bout was met with a sudden stop when illegal elbows to the back of the head dropped Kunimoto to the mat and prompted a halt to the action by referee John Sharp and a visit from the Octagonside physician. After an examination by the doctor, the fight was halted at the 2:57 mark, with Brazil's Dutra being disqualified.

South Korea’s Kyung Ho Kang delivered the most impressive performance of his UFC career in the main card opener, submitting Japanese newcomer Shunichi Shimizu in the third and final round of their bantamweight contest. 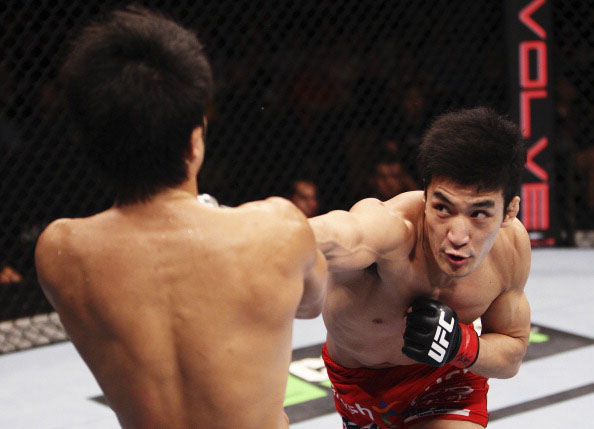 The much bigger Kang was expected to get some trouble from Shimizu (28-9-10) on the mat, but after using his strikes effectively to open the fight, the Busan native was even more impressive on the canvas, nearly submitting his foe before an illegal downward elbow opened a cut on Shimizu and prompting a restart from referee Steve Perceval, who docked two points from Kang. Now in a desperate position on the scorecards, Kang continued to press, but there was another stoppage in the action after what Shimizu believed was a low blow but that Perceval ruled was legal after looking at the replay.

Kang (12-7, 1 NC) continued to dominate in round two, with Shimizu having no answers anywhere. Finally with two minutes left, Shimizu was able to escape and get in the top position, but Kang quickly reversed, resuming his ground and pound assault until round’s end.

The one-sided action didn’t abate in the final stanza, with Kang’s punishing ground strikes setting up an arm triangle choke that kept the judges out of the fight and produced a tap out at 3:53 of round three.