NEWARK, NJ - After more than a year on the sidelines due to injury, welterweight contender Tarec Saffiedine made a triumphant return on the UFC Fight Night prelim card Saturday at Prudential Center, winning a close, but unanimous, three-round decision over Jake Ellenberger.

Whether to the head or the body, Saffiedine’s kick-centric attack paid off throughout the opening round, but while each thudding shot was undoubtedly taking its toll on Ellenberger, “The Juggernaut” was still in the fight, as evidenced by a right hand that jarred Saffiedine with a little under two minutes remaining.

Early in round two, it was Saffiedine’s turn to rattle his opponent, and he did just that, but Ellenberger cleared his head fairly quickly and resumed the stalking of the Belgium native. Saffiedine’s command of the long-range action allowed him to maintain control, but a late-round takedown by Ellenberger tightened things up a bit.

The crowd got restless in the third as the pace slowed, but there had been more than a few kicks and punches by both fighters that warranted a little future caution. But with the fight as close as it was, every little advantage was an important one, and Saffiedine getting Ellenberger to the mat and nearly taking his back was a key in the closing minute, one equaled by Ellenberger when he put his opponent on rubbery legs just before the end of the fight. 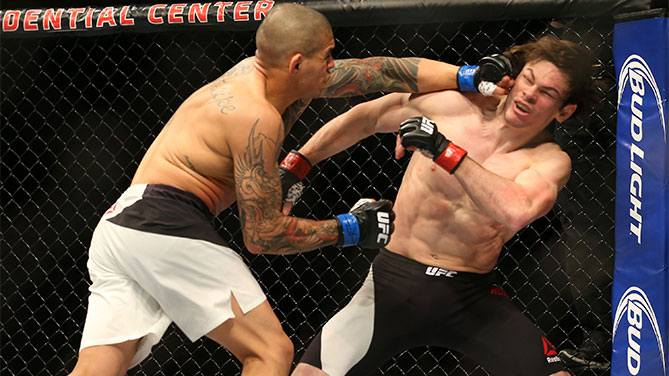 Ferreira controlled the striking portion of the bout in the first round, with a spinning backfist particularly effective for the Brazilian. Aubin-Mercier’s responses generally consisted of hard kicks to the body and the occasional rush with his fists, but he was unable to get Ferreira to the mat.

For the first four minutes of round two, Ferreira continued to impress with his stand-up attack, but in the final 60 seconds, Aubin-Mercier was able to jar his opponent on a couple occasions, reminding him that he was far from out of the fight.

With the fight still up for grabs, Aubin-Mercier got a much needed takedown in the second minute of round three, but a second trip to the mat saw Ferreira reverse position and get on top. Moments later, Ferreira took Aubin-Mercier’s back, but “The Quebec Kid” was able to escape the ensuing rear naked choke attempt. Ferreira wouldn’t give up the position though, allowing him to pile up more points before the final horn.

Number 15-ranked middleweight contender Rafael Natal made it four wins in a row on his mother’s birthday, stopping Kevin Casey via strikes in the third and final round.

Both fighters had their moments in the first round, each scoring takedowns. But Natal saved his best for last in the frame, as he drilled Casey with a right hand just before the bell that dropped the Californian to the mat.

Bruised around his left eye from an apparent eye poke, Natal began the second with an illegal kick to the groin that brought a brief halt to the bout. When the fight resumed, Natal was able to jar Casey again with his strikes before putting him on his back. The two rose after a quick stay on the ground, yet Natal scored another takedown as he began to pull away on the scorecards. In the closing seconds, Natal let loose with a series of ground strikes, but he was unable to finish his opponent.

Already ahead going into the final round, Natal wanted to put a stamp on the fight and he did, getting Casey to the mat, where he unloaded with a series of unanswered strikes that brought in referee Gary Copeland to stop the fight at the 3:37 mark. 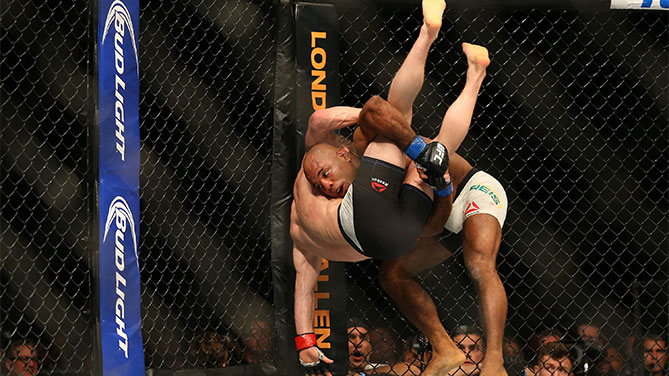 There was plenty of solid back-and-forth action throughout the opening round, yet while Ortiz had his moments, Brazil’s Reis speed and versatility kept him a step ahead throughout, both with his striking and the two quick takedowns he scored.

Reis kept the pace high in round two, nullifying the majority of Ortiz’ attacks and continuing to control the ground action, even coming close to securing a rear naked choke and then an armbar before the horn intervened.

Getting the fight back to the mat in the second minute of the final round, Reis added to his lead before standing and going back to work on the feet to set up another thudding takedown. By now, Ortiz was game, but Reis was pulling away, and he didn’t let up until the bout was over.

Through 22 pro MMA fights, Belmar, New Jersey’s George Sullivan had never been stopped by strikes or even knocked down. That streak came to an end in his 23rd bout, as Russia’s Alexander Yakovlev won his return to the welterweight division via first-round knockout.

Sullivan had success with his leg kicks in the early going, but Yakovlev was cool under pressure, landing his own strikes as well as two takedowns. But it was that stand-up game that proved to be the biggest weapon, as he landed a flush right hand that put Sullivan down and out, bringing in referee Gasper Oliver to halt the bout 3:59 into the fight. 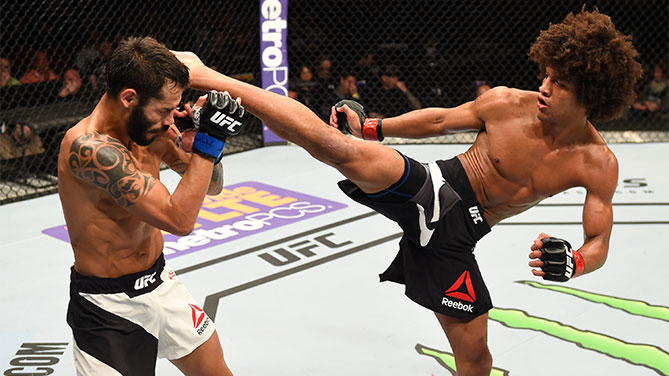 A return to the featherweight division was apparently the key for Alex Caceres to break a three-fight losing streak, as he won a shutout three-round decision over Mexico’s Masio Fullen in his first fight at 145 pounds since 2011.

Fullen had some difficulty with the unorthodox attack of the rangy Caceres in the early going, eventually finding his range briefly midway through, as he bloodied his foe’s mouth. Caceres finished strong though, wrapping up the round in his favor.

Less flashy than his foe, Fullen nonetheless closed the gap a bit in round two, but whenever it looked like the Guadalajara native was making a run, Caceres would up his work rate and take control once more.

As Fullen slowed in the final stanza, Caceres maintained his steady pace, and outside of eating a left hook with a minute to go, the round belonged to “Bruce Leeroy,” who improves to 11-8 with 1 NC. Fullen falls to 10-6.