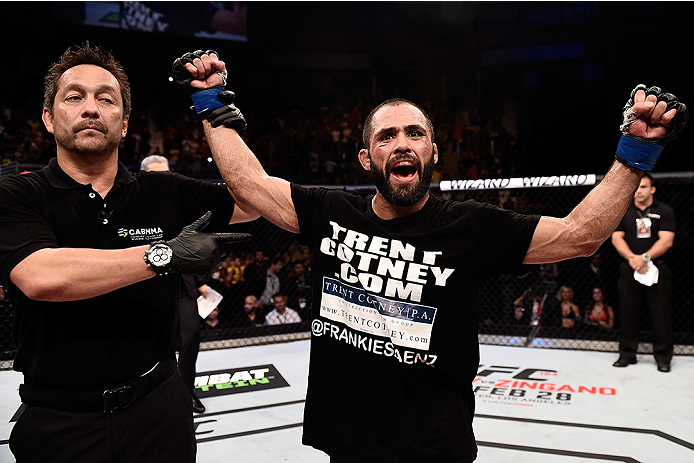 Being a 7-1 underdog is no joke, except when you win.

Sitting on the other side of the planet in his opponent’s home country of Brazil, UFC bantamweight Frankie Saenz literally laughed out loud when he found out he was a 7-1 underdog against Iuri Alcantara in February. A few hours later, Saenz would prove the critics wrong by earning a unanimous decision against the then-top 10 ranked Alcantara.

“To be honest, I never really thought about it,” Saenz said of his underdog status. “I was on Facebook and stuff on the day of the fight, just lying around and resting, and I was telling [UFC flyweight] Henry Cejudo, ‘Dang! I didn’t realize I was this much of an underdog.’ He starts laughing and was like, ‘Don’t look at that stuff.’ I started laughing too. That stuff doesn’t matter to me. I feel like I’m one of the best fighters in the world in the division. I want to fight the best guys in the world because that’s where I think I am.” 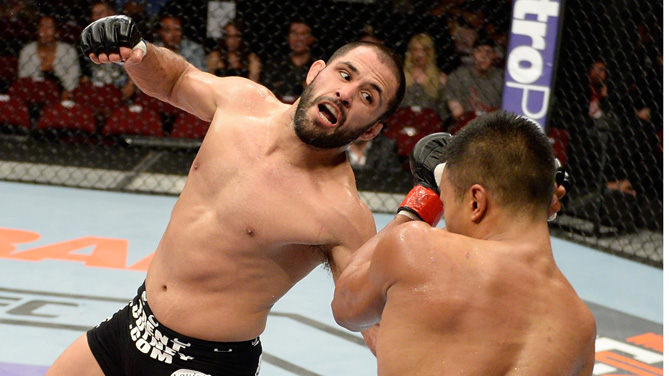 In only his second Octagon appearance, the former NCAA Division I wrestler from Arizona State University and the University of Northern Colorado was thrust into a bout oddsmakers believed he had no business being in. After taking a unanimous decision win over Nolan Ticman in his Octagon debut, Saenz was set to scrap with UFC and WEC veteran Alcantara - who was on a three UFC fight win streak - in his native Brazil. Needless to say, the bout didn’t go the way the doubters thought it would, but the hard-fought unanimous decision win went pretty much how Saenz had planned.

“I was expecting kind of how it went,” Saenz said. “He’s a tough opponent, a tough dude. I have a lot of respect for him. He’s been around for awhile. He hits hard, he kicks hard. Everything he does, he does with power. My preparation for that fight was the key for that fight. Being able to wear him down as the fight went on and beat him up in all the different positions - to make him uncomfortable. I think we did a good job just wearing him down.”

Saenz’s secret to super confidence comes simply from the hard work he puts in at the Fight Ready gym in Scottsdale, Arizona. The 34-year-old, who was born and raised in “The Grand Canyon State,” has been the gym’s wrestling coach since day one, alongside his MMA head coach Roland Silaraup. As for teammates, Saenz battles with the aforementioned and undefeated Cejudo, as well as fellow UFC bantamweight Roman Salazar. The gym has also attracted other Octagon talent like John Moraga, George Roop and Anthony Birchak for regular visits.

“You give me a six to eight week training camp, I’ll be prepared, I’ll have a game plan and I think I can beat anyone of these guys in the top 10,” Saenz said. “The UFC has the best fighters in the world and I just want to fight the best guys out there. My whole thing is, if you want to be the champ, you have to think like one. The champ doesn’t get to pick and choose who he gets to fight; the champ fights the next best guy. I want to fight the next best guy, whatever guy will take the fight with me. I tried to get a top 10 opponent for my next fight, it was just a matter of getting it done. But I like the challenge and I love my team. I feel like my coach prepares all of us so well for each fight. Just going into every fight I feel 100% confident I’ve done everything I could to win the fight.”

Up next, Saenz travels to Nashville for UFC Fight Night: Teixeira vs. Saint Preux to tangle with Sirwan Kakai. The American Top Team product took a unanimous decision win in his Octagon debut over Danny Martinez in June. The bantamweight known as “Zohan” was not used to winning by decision, as 10 of his previous 11 career victories were by stoppage. Kakai does not have the name recognition or ranking prestige like Alcantara had, but Saenz is quite familiar with Kakai and is treating him as just as serious of a threat.

“Sirwan’s tough,” Saenz said. “He’s real solid. A lot of things he does are real basic, but he’s always protecting himself. His hands are always up, he’s always in good position. That’s going to be tough breaking through that. He actually fought somebody who went to the same high school as me, Danny Martinez. He’s a little younger than me, but we went to the same high school out here in Arizona, so I was actually really watching that fight. I was watching and cheering Danny on the whole time. I’ve been training hard for this camp. I’ve got some good partners that can imitate his style. I’ve trained just as hard for Sirwan as I did for Iuri. I’m ready for war.” 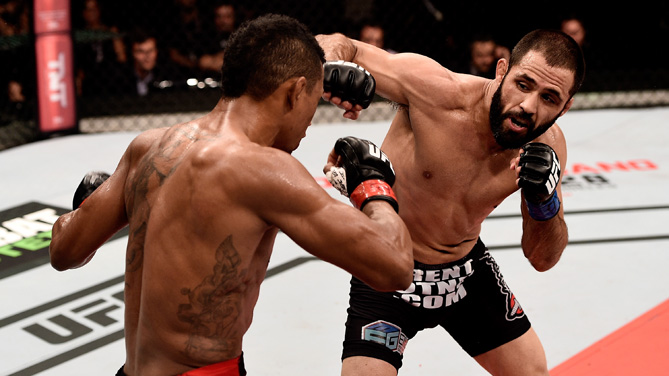 While not looking past Kakai, Saenz does have his sights set on the big names that have filled up the top ten UFC bantamweight rankings for a long time. Owning a 10-2 pro record may not sound like a ton of experience, but most of Saenz’s pro bouts outside of the UFC have had the title of whatever organization he was fighting for on the line, and he is ready for all comers, including an early opportunity to take down more of the division’s old guard.

“I think the fans want to see new blood in the division,” Saenz said. “There are some great guys coming up. Thomas Almeida is tough, Aljamain Sterling is tough, and I’m coming right through. I think the fans want to see the top 10 guys fighting. I feel like a lot of these guys have been idle for a long time, honestly. The 135-pound division is stacked, but nobody is fighting in the top 10, top 15. I think with all these new guys coming in, there are a lot of good matchups that I think the people will want to see.”

This Saturday at the Bridgestone Arena in Nashville, Saenz continues his charge up the rankings as he collides with Kakai. “I got my eyes set on winning,” Saenz said. “The opponent doesn’t really matter to me at this point. I want to keep winning, keep rolling. I’m just working my butt off to be prepared and to put on a show for the fans.”
>UFC FIGHT NIGHT: TEIXEIRA VS. SAINT PREUX, 10PM/7PM ETPT