"I guess I never knew just how much I liked competing until it was on pause." - Amir Sadollah 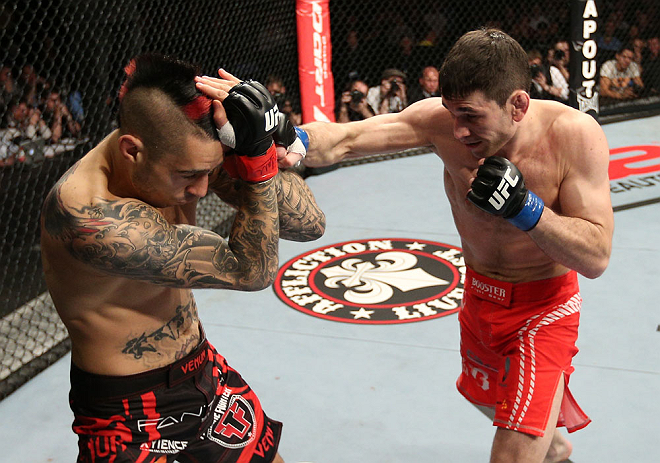 TOKYO, September 17 - After close to two years away from the Octagon due to injury, all it takes is a response to a simple question about his absence to realize one of the reasons why we all missed Amir Sadollah in the first place.
“If I was a better storyteller then the answer to this would involve polar bears, submarines, and the cure for the common cold,” he said. “But since I am not, and the prior is wholly untrue, I'd have to say...I was just hanging out, and also getting over a few injuries.”
It’s that quick wit, coupled with an exciting approach to the Octagon and a self-effacing attitude outside of it that made Sadollah a fan favorite while prompting of the sport’s most oft-heard queries: when is Amir coming back? Even the 34-year-old Las Vegan didn’t know, a scary proposition when you can’t do your job in the field that you love.
“I'd have to say anytime you’re not actually in the Octagon you wonder if and when you will be back,” he said. “There are certainly no guarantees in life, and definitely not in our sport.”
And if you’re breaking down the career of Sadollah to this point, “a work in progress” would have to be the operative phrase for a fighter who has fought his entire professional career under the UFC banner, going 5-4 in his nine fights after winning The Ultimate Fighter in 2008. There have been highs and there have been lows, but Sadollah has never lost his ability to stay relevant while remaining a student of the game, even if that means learning while on the sidelines.
“I have absolutely come to believe that you can (improve your game while not being able to compete physically),” he said. “Not only directly in your skill set, but just focusing on your own processes as a person can help you across the board. Prior to this layoff, I wouldn't have been able to see that, but when one path is blocked to you, necessity drives you to find others.”
Earlier this year, Sadollah finally got the green light to return, and the response was as you would expect it to be, something he describes as “Probably a mix of elation, focus, relief, and most of all just being happy to be able to do what it is I love.”
Yet an October date with Nico Musoke in Stockholm was scrapped in order to slot Sadollah in two weeks earlier for a Saturday bout in Saitama against Yoshihiro Akiyama. In a way, it’s the perfect return considering the popularity of “Sexyama,” not just in Japan, but around the world.
“I think every fighter and matchup is unique, and each presents its own challenges and rewards,” Sadollah said. “Akiyama is a widely recognized fighter with an impressive list of accomplishments. I think my style meshes well against his, and I'll be looking forward to an exciting, high-paced fight.”
Fight fans expect nothing less from either fighter, making it a great matchup on a stacked card that marks the UFC’s annual trip to Japan, and Sadollah’s first business trip to The Land of The Rising Sun.
“It really is awesome to be able to fight in Japan,” he said. “Even before I had ever heard of MMA I was always a fan of the Japanese cultural approach to competition and the martial arts in general. It kind of seems like a rite of passage not everyone gets, and I am certainly glad for it.”
Fighting in Saitama Super Arena isn’t the only rite of passage for Sadollah, and not even the most visible, as a win over Akiyama makes his layoff seem like a distant memory while tossing him right back in the middle of a much different welterweight division than the one he left after his loss to Dan Hardy in September of 2012.

“It was never an easy division, and is think it's gotten even more competitive recently with a lot of great talent,” he said. “But I try to never compare myself to a broad spectrum of guys. Rather, I try to stay focused on the fight I have at hand.”
Call it The Sadollah Way, and whatever the result on Saturday, he’s just happy to walk that road again.

“I guess I never knew just how much I liked competing until it was on pause,” he said. “It was a bittersweet lesson, and I feel it lent me an even bigger appreciation of being a part of this sport.”
That’s really too serious of a note to end an Amir Sadollah story on, so let’s try that again, Amir…What should fight fans expect from the 2014 version?
“Hopefully, I'll be able to show all the cool new tricks I've been working on. Also, probably a lot more pictures of my dog. Like more than you care about.”
Now that’s better.