Sadollah Prepared to Take the Long Road to the Top

"I want to fight the best guys and work towards being the champion. It’s a long road and I’m ready to start trudging down it." - Amir Sadollah 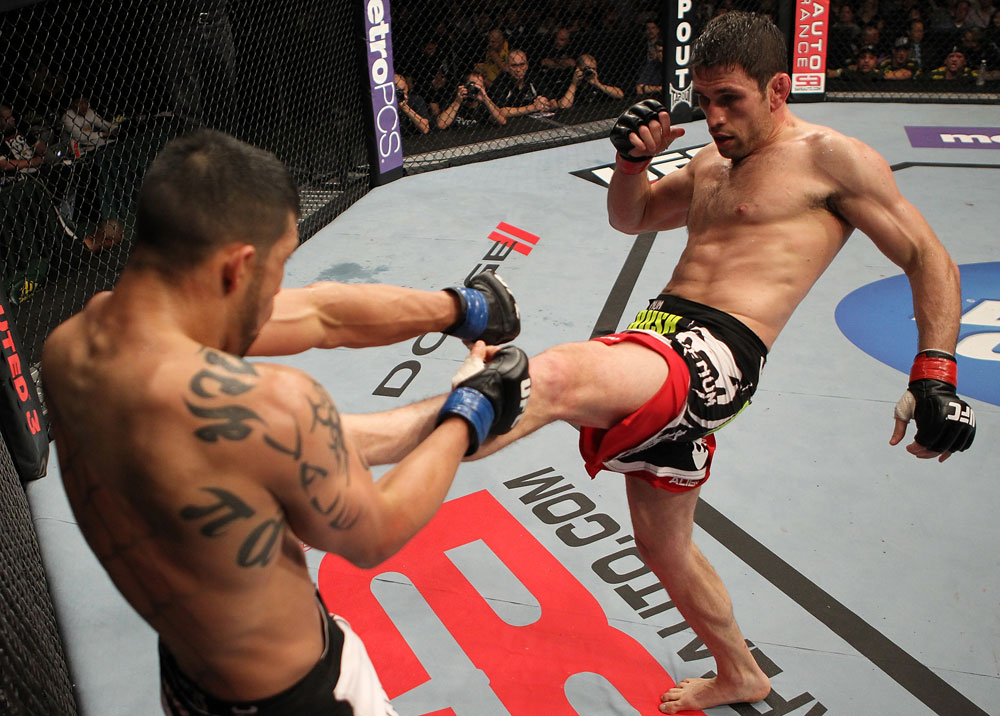 The journey through mixed martial arts has been anything but typical for Amir Sadollah. The former surgical technologist turned Ultimate Fighter winner has experienced a whirlwind of change both personal and professional.

Sadollah was selected to be a contestant on the show without having a single professional fight on his record but managed to win the tournament in impressive fashion. He would be dealt a setback in his first outing after the show but over the course of his next seven fights, Sadollah has begun to come into his own. There have been both ups and downs along the way, but Sadollah’s skills have continued to progress.
The exposure from the reality show put him on a career fast track and he has spent every fight since trying to find comfort inside the Octagon.

“I want to be a striker who is aggressive when it’s called for and patient when necessary. That’s the greater achievement in striking, wrestling, and grappling as well, being able to mix it up where you can be aggressive when the time is right but patient when the opportunities haven’t presented themselves. That’s my goal, and you always have to take into account how your opponent is fighting as well. I want to be able to vary my approach to fighting because you have to be able to adjust your game plan on the fly. The fight you are expecting is inevitably never going to be the fight you think it’s going to be.”

While his goal to become a well-rounded mixed martial artist may be high on the priority list, defeating former number one welterweight contender Dan Hardy is certainly the immediate task at hand. Sadollah will take his Muay Thai-based striking into Hardy’s backyard of Nottingham, England this Saturday, where he will do his best to oust the British slugger on his own turf. Typically, fighting in a hostile environment would be enough to rattle most people, but Sadollah and his quirky sense of humor are looking forward to the challenge and expecting more from “The Outlaw” than just powerful left hooks.

“I’m pumped for the chance to fight Hardy,” Sadollah said. “All clichés aside, camp went very well. I’m really happy with all of my training partners, coaches, and the people who helped get me ready for this fight. I did the first part of my camp in Las Vegas and then traveled to Holland to finish out the last leg. I always like going over there and working with those guys. With this fight being in England things really worked out nicely.

“I think it’s really cool to be facing Hardy in England and I’m excited for the challenge. He’s had some losses, but those losses came against guys who were at the top of the division who a lot of guys would have had a problem with. The fans may not love me when we step into the cage for this fight but it’s just another part of the challenge which I really enjoy.

“I don’t think Hardy is one dimensional. No one in the UFC is. His strength is for sure in his striking but I don’t have any assumption that I’m fighting anyone at this level who can’t submit you or can’t take you down. I have to be prepared for everything. My approach to fighting is that you obviously have to be aware of your opponent’s skills, but it’s ultimately about making it your fight. It’s about imposing what you want to do and not fighting off just what your opponent does. Fans can expect to see an exciting, high-paced and violent fight. That’s what I’m expecting.”

In a summer plagued by injury, Sadollah vs. Hardy is one of the few high profile matchups which have made it from paper to cage. Fighter injury is an ever increasing issue in the sport and has certainly put the UFC through the wringer over the past several months. Throughout his young career Sadollah has spent his fair share of time on the sidelines, but believes as the sport continues to evolve it is something we will see less and less of.

“Getting injured is part of the game when you are in a sport as physical as ours,” Sadollah said. “I’m definitely no stranger to being injured. With this sport being in its relative infancy, a lot of guys have to be their own coaches. They have to be their own motivators and sometimes you kind of need someone from the outside to tell you to step back. You need someone protecting you and watching.

“Right now everybody, at least for the most part, is their own coach. It’s not like the NFL, where you show up, be a good athlete, and your seven coaches and trainers dictate your training. I think as the sport progresses, coaches and camps will get a little bit smarter about how to prepare fighters. Injuries are still going to happen, but I believe it will get under control. There are no shortages of great matchups, and sometimes the replacement fights are better than the ones which were originally scheduled.”

In just a short amount of time, Sadollah has experienced a little bit of everything the sport has to offer. He went from being the quick-witted funny man following his TUF win, to the prospect on the rise. Following several rough outings and his respective bounce back, the one thing which shows through on Sadollah consistently is heart. While he may not yet be considered a contender, UFC gold is resting steadily on the mountain top.

“My immediate goal is to the best I can in my fight coming up with Hardy,” Sadollah said. “In every fight you prove something to yourself and that is what I’m looking for in this upcoming fight. I want to have a great performance and a good showing. Obviously everyone wants to be the champion and wants to be the best. I want to fight the best guys and work towards being the champion. It’s a long road and I’m ready to start trudging down it."