With three UFC fights under her belt, Sabina Mazo is getting a sense of the fighter she can become.
By Zac Pacleb, on Twitter @ZacPacleb • Sep. 9, 2020

With three UFC fights under her belt – two wins and a loss – Sabina Mazo has a specific idea how she wants her fight with Justine Kish to end on September 12.

“A performance of the night,” Mazo told UFC.com. “Doesn’t matter how. I aim for that. I’m trying to achieve that. My grappling has evolved a lot, but the fight starts standing up, so as soon as the beginning of the fight, I’m in that.”

In her trio of UFC starts, Mazo showed a keen and rangy striking ability, and while she has gotten close to finishing fights early, she depended on the judges to see the fight her way each time. Most recently, she earned a split decision win over JJ Alrdrich in a tough, grinding fight at UFC 246. 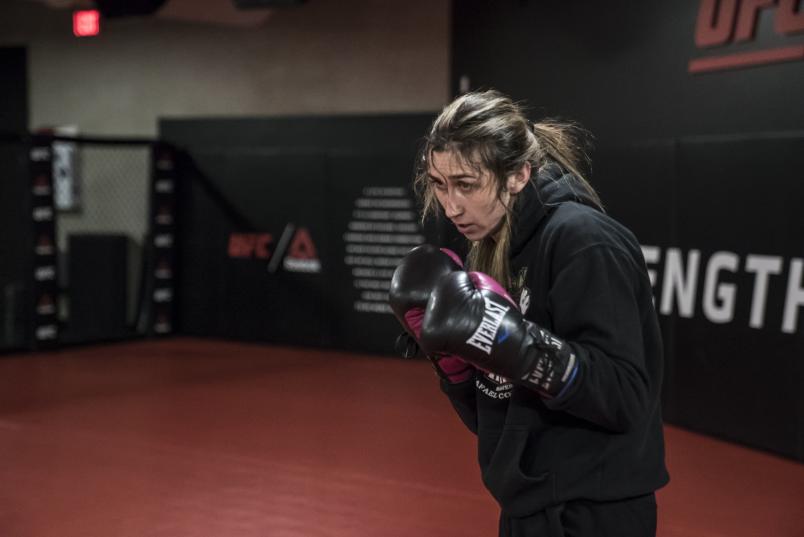 As she watched the fight a handful of times, Mazo knew it was her sense of urgency that was lacking.

As she prepared for her fourth foray into the Octagon, Mazo said training with her team at Kings MMA in Huntington Beach, California, went relatively business-as-usual amidst the coronavirus pandemic. When gyms closed, the team improvised and often worked out at middleweight contender Kelvin Gastelum’s house. 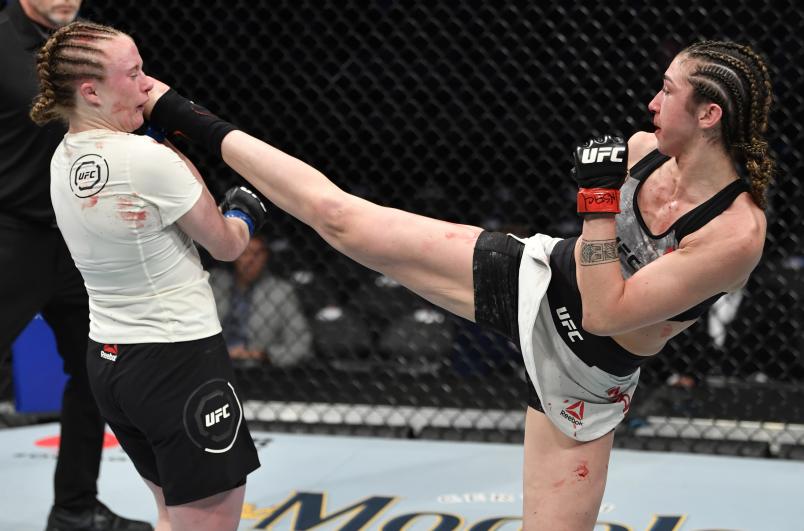 On top of that, Mazo had the pleasure of working with former UFC women’s featherweight champion Cris Cyborg as a training partner. Mazo was complimentary of the former champion, and she enjoyed picking up small habits just from working closely with Cyborg.

“Every camp has something different,” Mazo said. “Something that made a difference in this camp was that I had the opportunity to train and be very close to Cris Cyborg.”

Mazo emphasized a desire to start her next fight off at a busier pace, and she isn’t weary of gassing herself out too quickly. Mazo captured and defended the LFA flyweight title in her last two fights before joining the UFC, and both those fights went a full 25 minutes.

More UFC Vegas 10: Bryan Barberena Is Back | Fighters On The Rise | Fight By Fight Preview | Mike Rodriguez Making The Most of 2020

A talented striker, the Columbian carries plenty of confidence and power in her kicking game. Both her knockout wins as a professional came via head kick, and Mazo said she can tell when her opponent realizes the inordinate amount of pop Mazo’s lower limbs produce. She elaborated that her offense really builds off the kicks she can land and hopes that part of her game gets going early against Kish.

Yet before she gets to attempt to dominate from the start, Mazo’s first task is to balance the nerves that swarm before a fight.

“There is a feeling in your stomach where you’re like, ‘F***.’ You know?” she said, laughing. “Like something is coming. It’s a good feeling. You’re nervous. You’re anxious, but at the same time, it’s a feeling that powers me. It gives me fire.”