Ryan Spann: From 'Superkid' to 'Superman'

Light Heavyweight Draws His Toughest Test To Date In Antonio Rogerio Nogueira
By Gavin Porter • May. 9, 2019

Mixed martial arts is all about progression.

That’s exactly what UFC light heavyweight Ryan Spann has been focused on since landing a contract on Dana White’s Tuesday Night Contender Series last year. Spann calls Fortis MMA based in Dallas, Texas home and he, along with an extensive list of other athletes on the UFC roster, follow the iron sharpens iron mentality.

The wealth of quality training partners and the coaching staff at Fortis helped propel Spann to a successful UFC debut last September against Luis Henrique in Sao Paulo, Brazil. Over half a year later, Spann is ready to get back in the Octagon at UFC 237 in Rio De Janeiro.

His opponent will be Brazilian legend Antonio Rogerio Nogueira, who had a triumphant return to the UFC with a TKO victory over Sam Alvey on that same Sao Paulo card that featured Spann. Fighting a guy like Nogueria doesn’t just excite Spann, it gives him the perfect spotlight to show the world what he has been working on and how he has improved since his debut.

“We asked for it and they gave it to us. We wanted this,” Spann said. “It’s not on anything cocky it’s out of respect. Seeing him in Sao Paulo and I was like, “man that’s a big deal right there”, and I was like, “I want that.” It’s a big opportunity. I wasn’t expecting to get it but they gave it to us so like I said God has a plan with everything and we’re going to execute.”

Executing for Spann means remaining calm and just having fun, something that is easy for the 6 foot 5 inch tall fighter from Memphis, Tennessee.

“When I get in there it’s just me and you,” Spann said. “Nobody can fight for you. We have fun. You know this is what we work for, all the ass whoopings we take. No one knows what I have to go through so I don’t care what’s happening around me. I just be myself and have fun.”

Spann’s light hearted personality combined with his imposing physical build help make him one of the most unique fighters in the light heavyweight division. Ironically, Spann’s nickname “Superman” isn’t unique – well sort of.

Growing up in Westwood, Tennessee just outside of Memphis, Spann’s father was the oldest boy out of eight siblings and he was the neighborhood defender against bullies. And apparently he used to “take people out” which earned him the title of “Superman.”

“They used to call me ‘Superkid,’ but I didn’t know why. Naturally, when I hit 17, I was like, ‘All right, I’m done with this kid thing; I’m a man now,’ so ‘Superman.’ Then after a few fights, I went to Memphis and I was visiting my Dad. We walked into the store, and remember that all my fights at this point were in Texas. So we walk in and someone said, ‘Hey Superman!’ I looked and I was like, ‘Man, who knows me by that name here?’ And when my dad looked over, I was like, ‘Wait a minute,’ and then I started putting the pieces together. My dad had Superman stuff, he had it painted on the driveway and the mail box, he has a little man cave with stuff on the wall, so I said, ‘Okay, this makes sense.’”

So while he may be really “Superman 2”, Spann is focused on adding to the “Superman” legacy by defeating the legend Nogueira. 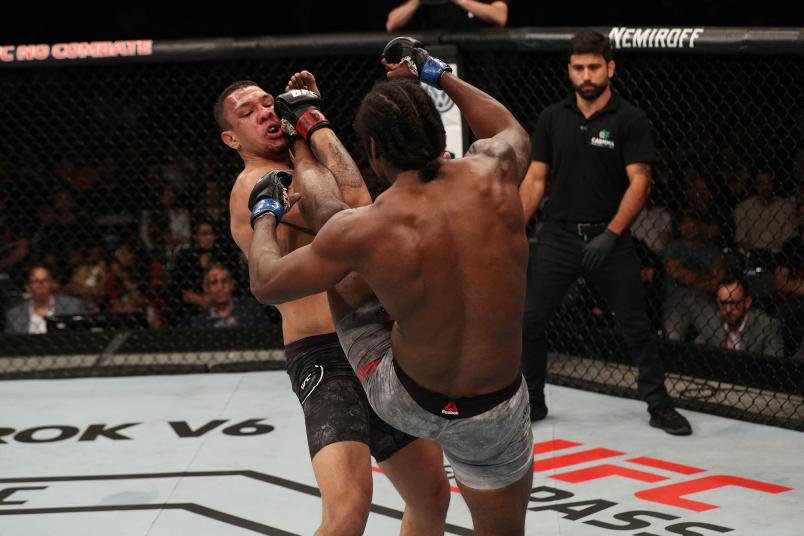 The UFC 237 main card will start at 10pm/7pm ETPT and is only available on Pay-Per-View. Order the card here.