Ryan Spann Must Win The Battle Of Wills

The final 60 seconds of Ryan Spann’s fight with Johnny Walker back in September were as chaotic and action-packed as any one-minute stretch that transpired inside the Octagon last year.

From the time they broke into space with 3:17 remaining on the clock until referee Dan Miragliotta stepped in and halted the action at 2:43 of the first round, there was a knockdown, a fighter moving to mount, a triangle choke attempt, another knockdown after both men landed at the same time, a desperate chase to close the distance and secure a takedown, a torrential downpour of hammerfists, some that appeared to miss the target and land to the back of the head, and a sharp elbow to the temple that ultimately halted the festivities.

Spann was in control through much of that chaos, dropping Walker with a left hand and following him to the canvas, where he landed in mount, got a little high, and missed on a triangle choke attempt when the Brazilian scooted out the back door and postured up. Once they returned to the feet, the Fortis MMA product ate a shot while connecting with a right hand that took Walker’s legs out from under him, prompting the towering Brazilian to crash face-first into the canvas, bringing Miragliotta in for a closer look.

As Walker retreated to the fence, Spann gave chase, missing with a wild right hand as he closed the distance and dropped his hand, eager to put Walker on the canvas and thereby nullify some of his power. But as soon as he changed levels, the momentum of the fight changed as well.

Walker began raining down strikes, some landing clean, others missing the target, prompting Spann’s coach, Sayif Saud, to loudly object to the series of blows. As his charge re-adjusted and once again tried to drag Walker to the canvas, the defending Brazilian crashed his right elbow into the side of Spann’s head, causing the Texan to slump to the canvas and the fight to be halted. 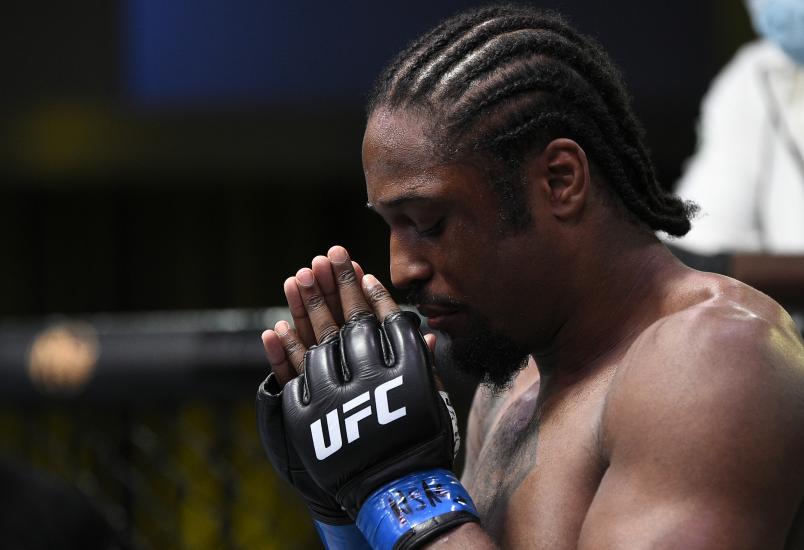 Despite two knockdowns, a dominant position, and a submission opportunity in a 45-second whirlwind of action, the final 15 seconds and the victory were Walker’s, leaving Spann to force to regroup.

“That fight was what it was and I don’t think it hurt his confidence at all,” Saud said of Spann, who returns to action this weekend against Misha Cirkunov in a clash of Top 15 light heavyweights looking to begin building momentum in the wide-open division. “I think he realized that he needed to move there, but I don’t think his confidence has waned at all. As a matter of fact, I think he’s even more confident than he was before because he had Johnny on ice skates in that fight, twice.

“I think that was a fight where he didn’t lose much ground because people saw the power in both hands — he dropped him with both hands — and people knew it was a weird one,” continued Saud, who has turned Fortis MMA into an elite camp in a very short amount of time. “It’s a learning moment and he’s going to learn that you can’t stay in a bad position, no matter what’s going on.

MORE UFC Vegas 21: Fighters On The Rise | Fight By Fight Preview | For Charles Jourdain, It's Never Over

“I think he’s going to make those adjustments and come back better.”

Spann is already really good, having rattled off eight straight wins, including four consecutive victories inside the Octagon prior to his fight with Walker last fall.

One of several members of the Fortis MMA squad to fight for and win championship gold under the LFA banner on their way to the Octagon, Spann fought a quality slate on his way to the UFC and has continued to do so since arriving on the biggest stage in the sport three years ago.

In his second UFC appearance, the quiet light heavyweight ventured to Rio de Janeiro, Brazil and knocked out Antonio Rogerio Nogueira in the first round. Five months later, he latched onto a guillotine choke and submitted Devin Clark.

Physically speaking, he ticks all the boxes, boasting tremendous height and length for the division while brandishing power in each hand, a slick submission game, and quality wrestling.

On paper, Spann has all the requisite skills and attributes needed to be a force in the light heavyweight division, and his coach believes he’s still on course to prove that, despite how things ended last time out.

“It’s very rare to have a Kamaru Usman or a Khabib (Nurmagomedov) — that’s why those guys are so impressive and deserve so much respect because they’re able to navigate that minefield without losing at all, which is unbelievably hard in our sport,” began the highly respected Saud, who counts Geoff Neal, Uriah Hall, and Macy Chiasson amongst his other charges working their way up the ranks in their respective divisions.

“Spann is 4-1 in the UFC and that fight, he was winning the fight until he lost it,” he added with a laugh. “You don’t want to read too much into certain things.

“Ryan is on a natural course with where he’s at, physically and mentally. To win four fights in a row and get into the Top 15 speaks volumes about where his talent level is at, and whenever you get to the Top 15, you make one mistake and that can be it.”

Five years his senior, Cirkunov was in a comparable position to Spann heading into his last outing, having landed on the business end of Walker’s power at UFC 235. 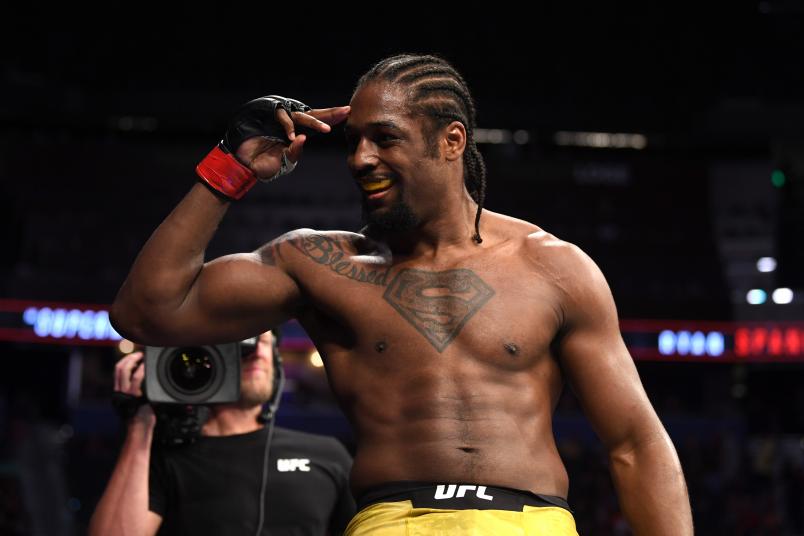 Ryan Spann celebrates his submission victory over Devin Clark in their light heavyweight bout during the UFC Fight Night event at Amalie Arena on October 12, 2019 in Tampa, Florida. (Photo by Josh Hedges/Zuffa LLC)

After beginning his own UFC career with four straight victories, his loss to Walker was his third in four fights, but all three came against surging or seasoned contenders. Six months later in Vancouver, the Latvian-born Canadian rebounded with an impressive submission win over Jimmy Crute, securing a Performance of the Night bonus for his Peruvian necktie finish.

“This sport isn’t like boxing — you can take losses in this sport and everyone understands,” said Saud, who has become one of the best coaches in the sport after his own career in the cage was derailed by injuries. “I think once you get to the Top 15, you’ve established yourself as someone that will have a strong career in the UFC, and it just takes on a different trajectory and a different life of its own from there.

“Those losses are viewed a little different by everybody,” he added. “Everybody understands there is so much at stake and losing isn’t a death sentence.”

In fact, losing is usually a required step in graduating to the next level and ultimately making a run towards the top of the division.

That’s why coaches and fighters frequently speak of learning more from a loss than a victory, and why Saud is right to heap praise on Usman and Nurmagomedov for their unbeaten runs at the highest level of the sport.

The setbacks show you what needs to be fixed, the areas you have to work on and, hopefully, stoke the internal fires that fuel growth, improvement, and forward progress.

From there, it’s all about timing. 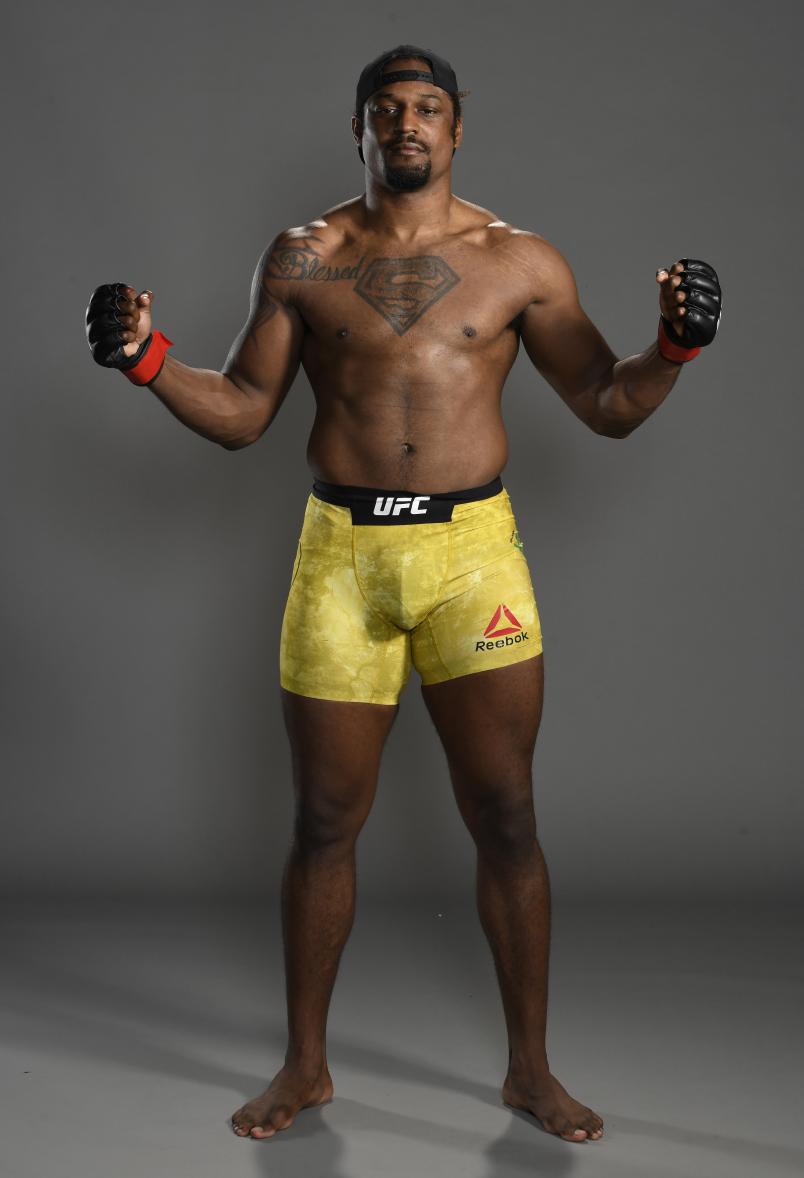 Ryan Spann poses for a portrait backstage after his victory during the UFC 249 event at VyStar Veterans Memorial Arena on May 09, 2020 in Jacksonville, Florida. (Photo by Mike Roach/Zuffa LLC)

“It’s all about hitting that momentum mentally and physically at the right time in the UFC, and if you hit that momentum at the right time and you start putting it together, that’s when you make your run,” said Saud. “Some fighters do it after they’re in the UFC, some of them right before, but not all of them do it during, and the key is to do it during.

“But that’s a maturation process that we can’t always dictate.”

Whether Spann can rebound this weekend or still needs another fight or two before everything coalesces and he starts making a run towards the top of the light heavyweight division, Saud knows that his fighter has what it takes to be great, but understands that once the Octagon door closes, it’s a game of inches that comes down to two things — execution and will.

“Ryan has all the tools; there’s no doubt about that,” offered his coach. “He’s got knockout power in both hands; he’s got a really good submission game. He’s good at everything — he’s very balanced, and very big, very fast for the weight class too.

“But when guys are fighting ranked fighters, everything has to go right because those are the best of the best.

“It’s a battle of wills in there,” he added. “You’ve got very talented, tough, trained athletes that have made it to the pinnacle of the sport, and really that’s what it comes down to: execution and a battle of wills.”