"I’m guaranteeing that they (the fans) are going to be entertained. Whether I win by submission or win by knockout, or even if we get a
Fight of the Night, I’m guaranteeing entertainment." - Ryan LaFlare 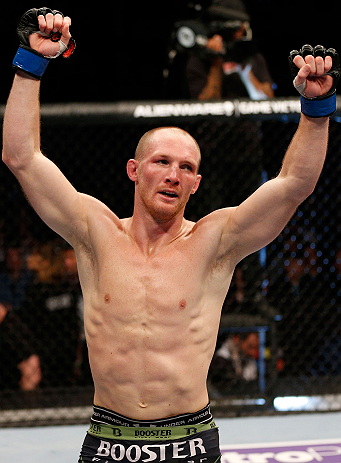 It was almost business as usual for Ryan LaFlare, who isn’t exaggerating when he says, “I’ve been battered with injuries pretty much my whole career.”

A former member of the Strikeforce roster who never fought for the promotion due to injury, LaFlare had more than a few nicks when he prepared to step into the UFC Octagon for the first time in April against Benny Alloway. They weren’t going to stop him from making that walk though.

“Obviously being in the UFC was my dream,” he said. “That’s the reason I wanted to fight, to get here and be at the highest level. But I was really banged up for that last camp. If I was anybody else, somebody with half a brain (Laughs), I probably would have pulled out of the fight. But I knew how important it was to be in the UFC, and I fight through injuries. My shoulder was so banged up going into the fight that I ended up tearing stuff in the first round. And I had a sprained ACL and a torn LCL going in. I was hardly able to train for that fight, but there was no way I was pulling out and there was nothing that was going to stop me from winning.”

And he did win, scoring a shutout three round decision win over Alloway to get his first Octagon victory. It was a risky move to say the least, but LaFlare wasn’t about to let this one go.

“I knew what my goals were and I knew what I needed to do,” he said. “I felt like if I waited to be a hundred percent healthy, I’d be 35 years old with empty pockets and a dream that passed me. I said I’m gonna get it done now; if it’s not meant to be, everything happens for a reason, and if I can’t get it done, no excuses. If I couldn’t fight, I wouldn’t have fought. But I knew I had something in me and I believed I could beat the guy, and I did. I made the right decision.”

Apparently. He got the win and now he moves on, taking on TUF Brazil 2 finalist Santiago Ponzinibbio on the main card of Saturday’s UFC Fight Night event in Goiania. It’s his second international bout in a row following the Alloway fight in Sweden, but LaFlare isn’t thinking about sightseeing.

“Some people say ‘man, that’s awesome, you get to travel the world,’” he laughs. “They’ve probably seen more of Sweden than I did. I saw the hotel.”

He expects the same this time around, and even though he’s fighting the home country favorite (Ponzinibbio is an Argentina native but has lived in Brazil for the past five years), that’s another part of the deal he is unconcerned about.

“When it comes down to it, the only person I’ve got to worry about is the one that I’m fighting. It doesn’t matter where I am. As long as I’m hydrated and healthy, I’m confident that I’m going to get the job done.”

LaFlare’s 8-0 pro record is a good indication that he’s got what it takes, and coming from a spot that is suddenly an MMA hotbed of talent - Long Island, New York – doesn’t hurt either. But the way he sees it, despite the fact that Chris Weidman, Al Iaquinta, Gian Villante, Dennis Bermudez, Costa Philippou and himself have all emerged in the last few years, LaFlare doesn’t see this as a sudden development.

“Me and Al came up together,” said LaFlare. “Chris Weidman, we were freshmen together at Nassau Community College, so I’ve known these guys my whole life, and I knew that we all were tough. We polished ourselves into steel, and now we’re where we deserve to be.”

It’s a far cry from the days when the only MMA fighters on the elite stage of the sport from the island were Matt Serra and Phil Baroni, and LaFlare admits that even though he had started studying jiu-jitsu in 2002, he didn’t think a little over a decade later he would be in the UFC.

“I grew up looking up to Matt Serra and Phil Baroni, and being like ‘those guys are badasses,’ and thinking that their lives were totally different than mine. I was just out of high school, I was into wrestling, I was into sports, I was into girls. But then after I graduated college, I needed to do something and I didn’t want to stop competing. I was an honorable mention All-American in lacrosse and I wanted to keep competing, so I started doing jiu-jitsu.”

From jiu-jitsu, LaFlare transitioned into MMA, and that was it for him. He was hooked. Eight wins and no losses later, he’s about to step into the Octagon for the second time, and this time, he’s making a prediction about what to expect on fight night.

“I’m guaranteeing that they (the fans) are going to be entertained,” he said. “Whether I win by submission or win by knockout, or even if we get a Fight of the Night, I’m guaranteeing entertainment.”