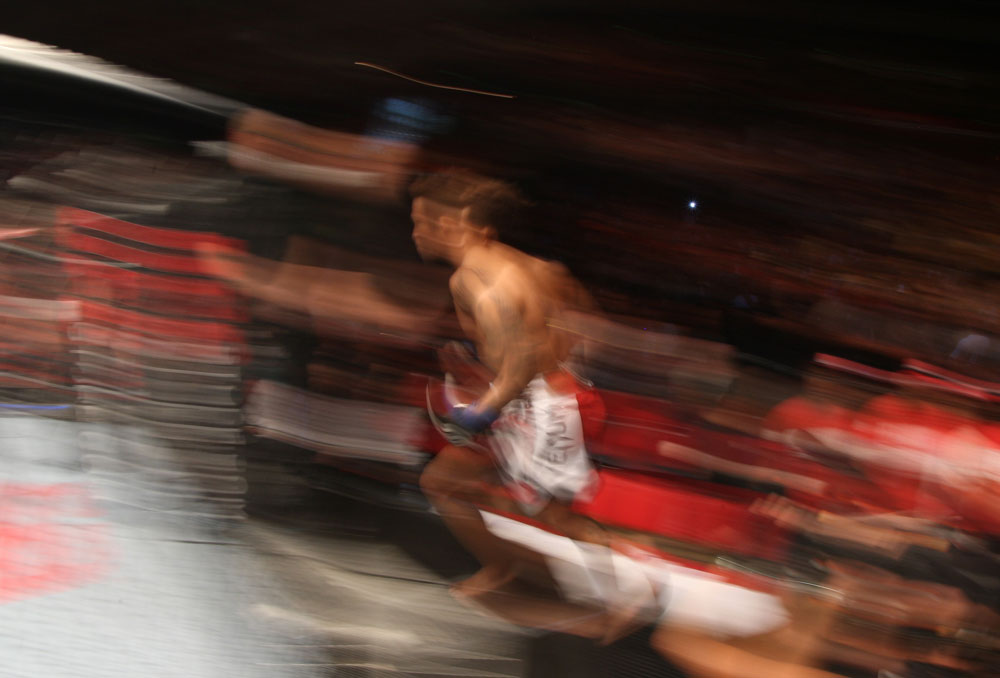 Many mixed martial artists made it to the UFC with less credentials than Ryan “The Big Deal” Jimmo, but after losing his first pro bout and reeling off 16 consecutive wins, did the light heavyweight from Alberta ever wonder if anyone was paying attention?

“After 16 wins in a row, I knew that somebody had to be paying attention,” said Jimmo with a chuckle. “At least to the robot dance afterward.”

He can laugh about it now, but at the time he was racking up win after win, he wondered what he needed to do to join the elite 205-pounders of the game in the Octagon.

“That wasn’t really in my hands,” he said in January. “There were other people deciding that, so all I could do is just keep winning in the ring. On the one hand it was a little bit frustrating, but on the other hand I wanted to make sure I was one hundred percent prepared and had all my skills in place and was ready to take the next step, so when I got there, I could do some damage.”

In the midst of his long winning streak, there was a brief moment when he thought the UFC was in his immediate future though, as he traveled to Las Vegas to compete for a spot on season eight of The Ultimate Fighter in 2008. But after a close majority decision loss to Antwain Britt, that ship sailed. He does call the loss a blessing in disguise of sorts.

“Absolutely,” said Jimmo. “My wrestling certainly wasn’t up to snuff at that time, and I wouldn’t have been able to get the proper training or proper attention to do something in the UFC, so it was a positive thing that happened.”

Jumping back into action as a mainstay of Canada’s MFC promotion, Jimmo stayed busy and added the names of UFC vets Marvin Eastman, Wilson Gouveia, and Rameau Thierry Sokoudjou to his resume, but with a number of his wins coming by decision, he was left in that peculiar no man’s land of winning, but not doing so impressively enough to get a UFC contract.

“When I was fighting before being signed, I was between a rock and a hard place because if you lose in a league other than the UFC, all of a sudden they’re like ‘okay, this guy’s not ready for the UFC.’ But if you take risks and do things that potentially put yourself in a position to lose, and you lose, you’re not taking one loss back, you’re taking five losses really. So I was fighting pretty conservatively because I simply could not afford to lose. But it gave me a little bit more time to develop skills and become a better fighter overall.”

Finally, Jimmo got his shot, but in keeping with the seemingly endless waiting game, he got injured and was forced to pull out of a January UFC on FX bout against Karlos Vemola. He looked at the bright side of things though, saying recently “I was patient and figured it just gave me more time to develop into a better fighter.”

This Saturday at UFC 149 in Calgary, Jimmo’s Octagon debut is on, and he’s geared up to face Australian veteran Anthony Perosh.

“Some guys get there and they’re not really ready,” he said. “I took a slower approach, it’s certainly more sure-footed, and I have all my skills and everything in place to do something now, as opposed to getting there and being a flash in the pan.”

And to aid in that process, he trained for this fight in Florida with the renowned Blackzilians camp, and he couldn’t be happier. “I needed to be training with world class fighters if I was to be fighting them. It's added some intensity to my game and brought my level up.”

That’s as far as Jimmo will go when talking about the night he has been waiting for years to see. On Saturday, he’s officially a UFC fighter, and he can’t wait to hear that opening bell ring.

“I just want to perform athletically and fight to the best of my ability,” he said.