Ryan Jensen On The Journey Of His Life

"I always go out there and put it all on the line, and I think that’s what the UFC is looking for." - Ryan Jensen 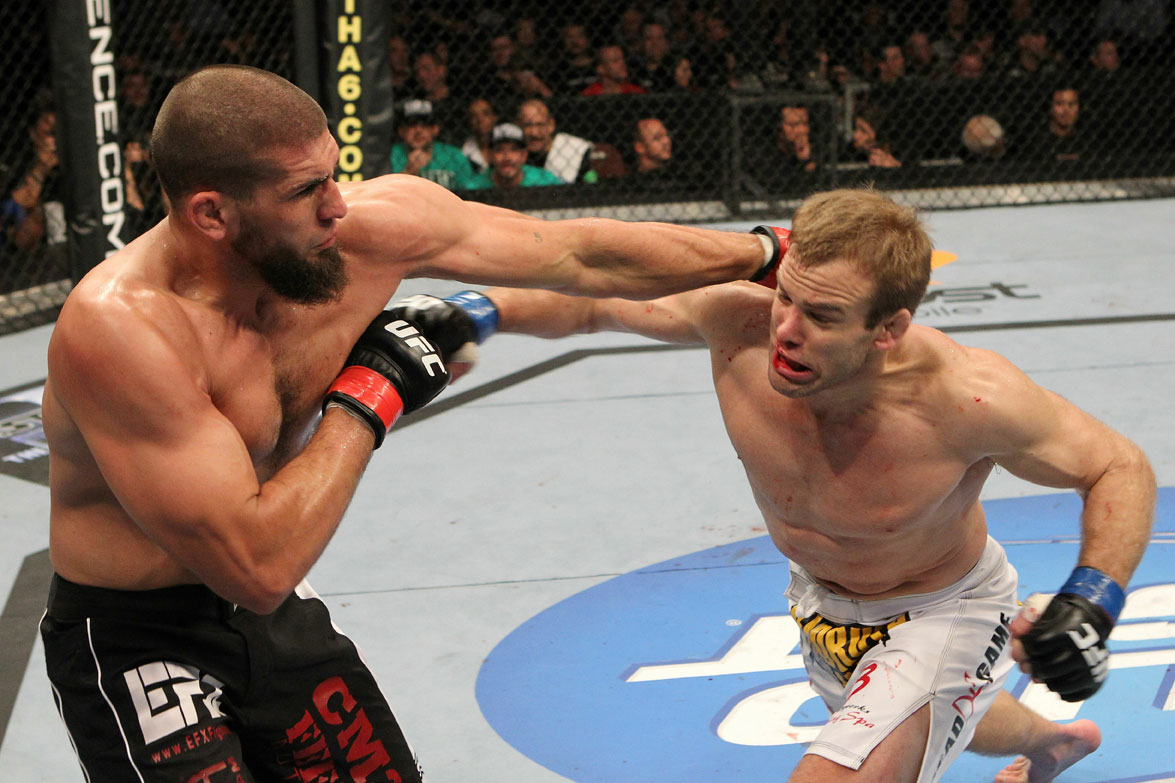 When you think of the UFC’s middleweight division, names like Anderson Silva, Chael Sonnen, Nate Marquardt and Demian Maia probably come to mind first and foremost.

But when you dig deeper and explore the likes of Dan Miller, Yoshihiro Akiyama, Mark Munoz and Brian Stann, you discover that the division is filled with some really great fighters, and some really great guys.

That’s where journeyman fighter Ryan Jensen (16-6) creeps into the picture.

Facing Jason MacDonald (25-14) at UFC 129 in front of 55,000 fight fans in Toronto’s Rogers Center on April 29, Jensen is looking to bounce back from a submission loss to TUF 11 winner Court McGee with a finish of his own against the always tough Canadian.

“I match up with him great,” says Jensen. “He’s a vet, I’m a vet, he likes the clinch and jiu-jitsu and I like standing up and banging. I think I have way better striking than he does. His jiu-jitsu is not great; it’s nothing I haven’t seen before. I’ve trained with a lot of guys who have better jiu-jitsu. He’s just real tall, he has a lot of leverage and he’s been around a while.  I think it’s a great fight.”

Jensen admittedly has not had a great run in the UFC, but he says he’s got what it takes to stick around and give the UFC and the fans something special each and every time he steps into the Octagon.

“I kind of look back at my last five or six performances and looking through Joe Silva and Dana White’s eyes, I always go out there and put it all on the line, and I think that’s what the UFC is looking for,” Jensen told UFC.com. “I think that’s why I’ve been a guy with nine lives. I don’t have the best record in the UFC and I’m still here fighting and stuff and I attribute that to going out there, looking for the knockout and pushing the pace as fast as I can.”

Jensen has had some epic battles and some epic disappointments, like the first round submission he suffered at the hands of Mark Munoz at UFC 108 in January 2010.

“That’s one fight I’d like to get back,” said Jensen. “I didn’t step into the cage very confident. I think I was broke before I even walked through the door. There were a lot of things that went wrong in that camp, and that’s not to take anything away from Mark. I think Mark did a great job in that fight, but I did not go into that fight myself, so I would love to have a rematch with Munoz.  That one stings a little bit, you know?”

With MacDonald, Jensen faces a man he has much respect for. After all, both he and his opponent have been in the trenches, and have survived a sport that has chewed up and spit out many a great fighter.

“I don’t have any animosity toward Jason,” says Jensen. “I’ve met him once and he’s a good dude. I don’t get involved in the smack talking, because at the end of the day we both get in the cage and fight. I have a lot of respect for a guy who’s been in the sport as long as he has, as long as I have, so we’re both old, grizzly dogs. I’m 33 and my first fight was back in 97 when I was 19 years old, and the game has changed a lot since then,” he said.

Jensen says that in order to survive as long as he and MacDonald have in the sport, one must adapt and learn new techniques, and stay in great condition.

“I tell my younger guys you’ve got to go out and find great training partners,” he says. “You need a good group of guys pushing you to get to the next level. And you have to seek out the right knowledge. You have to travel and get your knowledge. I went out to Pat Miletich. I went to Clay Guida’s before he was with Jackson. I was with Team Quest in Oregon for three years before I landed at Jackson’s here in Albuquerque. You have to adapt and evolve if you want to stay competitive in this sport.”

MacDonald, for his part, is coming off a broken leg and a nearly one year layoff from competition and that will certainly play into this fight with Jensen, but Ryan isn’t taking anything for granted.

“I think he’s going to have a little ring rust and the injury is definitely going to affect him,” he said. “But listen, Jason MacDonald’s been around for a long, long time, so he’s going to be prepared. He’s going to be in good shape. So I have to be my best. I’m not thinking about anything but facing the best Jason MacDonald there is.  We are going to go out there and give the UFC and the fans exactly what they want to see, and that’s a great, entertaining fight,” he said.

Jensen says he’ll be working with fellow middleweight Brian Stann for this camp, and he’s got nothing but praise for the retired Marine and war hero.

“Brian Stann shows up tomorrow so I’m pumped,” he said last week. “Brian has evolved so much as a fighter. Before he joined Jackson’s I saw him at Team Quest and the Brian Stann I know now, compared to the one I knew back then, is night and day. His evolution is very impressive. I was blown away by his fight with Chris Leben and he’s coming into his own right now.”

Jensen, however, doesn’t dole out the accolades to just teammates. He was impressed when Dan Miller stepped up to fight teammate Nate Marquardt at UFC 128 in Newark, NJ after Akiyama bowed out of the bout after a Tsunami devastated parts of his home country of Japan.

“He’s a very tough competitor and a seasoned veteran but I thought Nate would take him out,” Jensen said of Miller. “But Dan has a great chin, and he’s a great fighter. You have to give a lot of credit to Miller on that one and if you think about it he took the fight on short notice and if he were preparing for Nate instead of Nick Catone who knows how that would have turned out?”

Ryan has the advantage of being around the excitement Jon “Bones” Jones’ win has brought to the gym, along with the crime fighting antics of his coaches Mike Winkeljohn and Greg Jackson.

“It’s typical of who my coaches are; they see something wrong and they try to help,” he said.

Jensen is married and he and his wife have two daughters. He credits their support for his continued success inside the Octagon, and he is thankful for the opportunity to continue fighting for the world’s most prestigious MMA promotion.

“I was a fighter when I met my wife, so she knows that’s who I am,” he said. “Back in the day when this sport was built, nobody paid much attention, but these days it’s a monster. I remember going to a UFC event in Denver and there were like 2000 people – this is back in the 90s – and I’m going to be fighting in front of 55,000 people at the Rogers Centre in Toronto. So, what Dana White and the UFC have built is incredible. And with that comes a responsibility to not only the sport and the fans, but respecting what Dana White and the Fertitta brothers and everyone else working at the UFC has done over the past ten years. It shows what type of person you are when you can control your emotions and be a professional, inside and outside of the Octagon. People get upset and let their emotions get the best of them, and that’s just not a great way to conduct business, so I think the fact that I’m a bit older and I’ve been around this sport a while, I don’t take it for granted. I know where we came from, and I’m grateful for where we are and where we are going.”