"I just want to go out and compete and be as good as that as I possibly
can be." - Ryan Couture 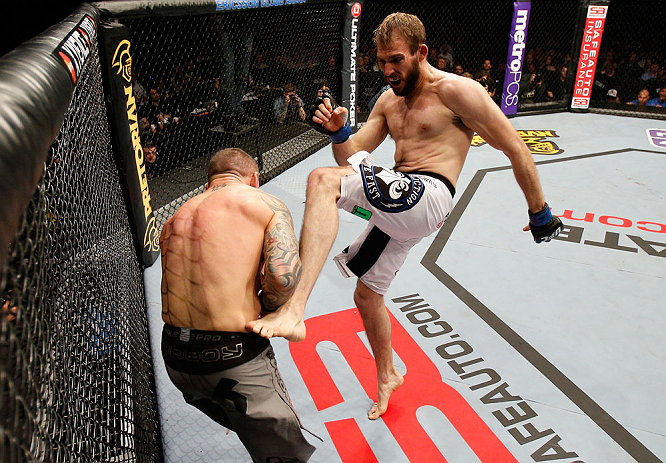 The meeting was arranged in a back room of a Gold’s Gym in Bellingham, Washington, shortly after Ryan Couture decided he was fed up with his current state of life. It was a few years earlier when Couture’s athletic career had reached its peak. After failing to qualify for States as a junior, Couture topped off his senior year by placing third in the Washington State 4A wrestling championship. The future was brighter than Einstein’s IQ for the son of a famous father crafting his legend in mixed martial arts. After all, wrestling was in the family genes and Couture was destined for great things upon his acceptance to Western Washington University.

Then Couture’s body suddenly screamed, “Uncle.” He had killed himself the entire season to make weight and was so burnt out that he decided to leave athletics behind. He enrolled at Western Washington to pursue a math degree, except that took a back seat to the temptations of the college student. Those popular “Before-After” weight loss commercials of the 1980s? Couture’s profile had morphed into “After-Before” in four years.

"When I went away to college, I partied, got fat and ate pizza, and didn't see myself ever coming back to being in shape and definitely not to being a professional athlete," Couture said.

Finally, Couture woke up one morning tired of being out of shape and unhealthy, and began jogging, going to the gym and losing weight. He started seeing some results when he met old acquaintances he hadn't seen in a while over working out each Sunday at the local Gold's Gym.

"Grappling again kind of brought back that old love that I had for wrestling, being on the mat and testing myself in that way," Couture said. "So I started being real consistent every Sunday, going up and showing up to that impromptu practice."

It was time to get back in shape. Time to ditch the lazy life and a banking career to return to athletics and the full understanding of what’s in the Couture blood. In 2008, Couture left his Pacific Northwest roots for Las Vegas and the family-owned Xtreme Couture, chipping away at what eroded him for too long to launch an MMA career that took him to Strikeforce and eventually the UFC. Up next is a lightweight showdown with Ultimate Fighter 15 runner-up Al Iaquinta at UFC 164 in Milwaukee.

A fractured hand forced Couture’s original opponent, Quinn Mulhern, out of the bout to set up a meeting with Iaquinta (5-2-1 MMA, 0-1 UFC), coming off some injuries of his own that forced him from the game for 14 months since he lost his UFC debut to Michael Chiesa at The Ultimate Fighter 15 Finale. In studying each of Iaquinta's TUF 15 fights, Couture (6-2 MMA, 0-1 UFC) discovered a distinct discrepancy between the two fighters’ primary strengths.

"In the tapes I've watched, the ground is definitely where he's weakest and that's where I'm best, so that's going to be to my advantage trying to get the fight there,” Couture said. “He's a dangerous guy standing, but I think I fought other equally if not more dangerous strikers as well. I'm not afraid of what he brings to the table there, but that's definitely where he's going to be at his most dangerous."

In more ways than one, redemption is at stake for Couture, who suffered a second round TKO loss to Ross Pearson (the winner of TUF: United States vs. United Kingdom in 2009). Back in Bellingham, the fighter’s life in the limelight was the furthest thing from Couture’s mind. Upon graduation, Couture took a job as an Operations Supervisor for Washington Mutual Bank in nearby Bellingham, Wash. He was ensconced in a nine-to-five routine of the working man and was ripe to live a life of contentment until an internal alarm clock screamed at him louder than a Banshee.

All it took was one morning for something inside Couture to click, an inner voice telling him, “That does it.” His friends compelled him to that back-room meeting. One of them was Cody Houston, who had just moved to Bellingham after graduation to open a jiu-jitsu and MMA school. Houston first met Couture at Gold’s through a mutual friend who taught a kid’s martial arts class at the facility.

Couture was to become Houston’s first student and first jiu-jitsu blue belt. A tight bond was quickly formed and strengthened through the years to where Couture will be a guest at Houston’s upcoming wedding. Couture picked up the jiu-jitsu game extremely fast. The fire was reignited.

"I think it was just the fact he was enjoying it again," said Houston, now the head coach of CageworX MMA in Port Angeles, Washington. "He was burned out from wrestling and just wanted to let go for a while. When we started doing what we were doing, he realized it was fun again, realizing that he had the potential and the talent to do what he's doing. But then he stepped into the competitive environment of Xtreme Couture. I think that's what kicked it off.

"It comes back to the fact that he's such a good guy and such a humble person, especially with that last name."

Ah yes, that last name. Couture cannot escape an interview without someone bringing up his legendary father, UFC Hall of Famer Randy Couture. It’s not that Ryan chooses to ignore it, but ever since he got into wrestling, it’s been about forging his own identity. One day Ryan just happened to casually mention he was traveling to Columbus, Ohio, to watch Randy fight for the UFC heavyweight championship.

No fuss, no braggadocio. For the first week he knew him, Houston had no idea he was Randy’s son. It’s the fabric of who Ryan Couture is and not a byproduct of his bloodline. He leaves it to others to drop the name and counts on himself to meet his own expectations.

"I've gotten pretty comfortable with it over time," Couture said. "It's sort of forced me to learn a lot of things a lot faster than most guys have to. I really have to elevate my game because I know there's a lot more eyes on me. It's kept me focused, it's kept me motivated in the gym, and kept me training hard and improving over the last few years."

On the fast track, Couture debuted for Strikeforce in 2010, two years after moving to Las Vegas, and raced to a 6-1 start before getting thrown into an inferno in Stockholm, Sweden. What UFC president Dana White later called the “UFC jitters” immediately came into play when Couture tensed up in the first round and came out flat in the second, leading to the TKO stoppage.

He had downplayed the nerves because he’s cornered big fights and has been around the game, but competing under the lights was different.

“I was nervous and stressed out more so than I've ever been for a fight,” Couture said. “Now that that first one's out of the way, I'll be a little more calm and relaxed for this fight, and hopefully shows a little better what I'm capable of doing and to maintain the right kind of pace the whole fight."

For Couture, it’s about the fight and not the name. The relationship with Randy is never going away, so the questions will never stop. From the time an out-of-shape Ryan decided to rededicate himself to athletics it’s been about creating his own body of work to reduce time spent talking about the fact he’s Randy’s kid. The next Randy Couture? Not a chance. The next Ryan Couture? Nah, he never thinks in those terms.

"I just want to go out and compete and be as good as that as I possibly can be,” Couture said. “Whatever other labels anybody wants to put on me, or how I'm seen by others, isn't something that I spend any time really thinking about. As long as I go out and do my job, the rest will take care of itself."