Ryan Couture Ready for the Latest Biggest Test of His Career 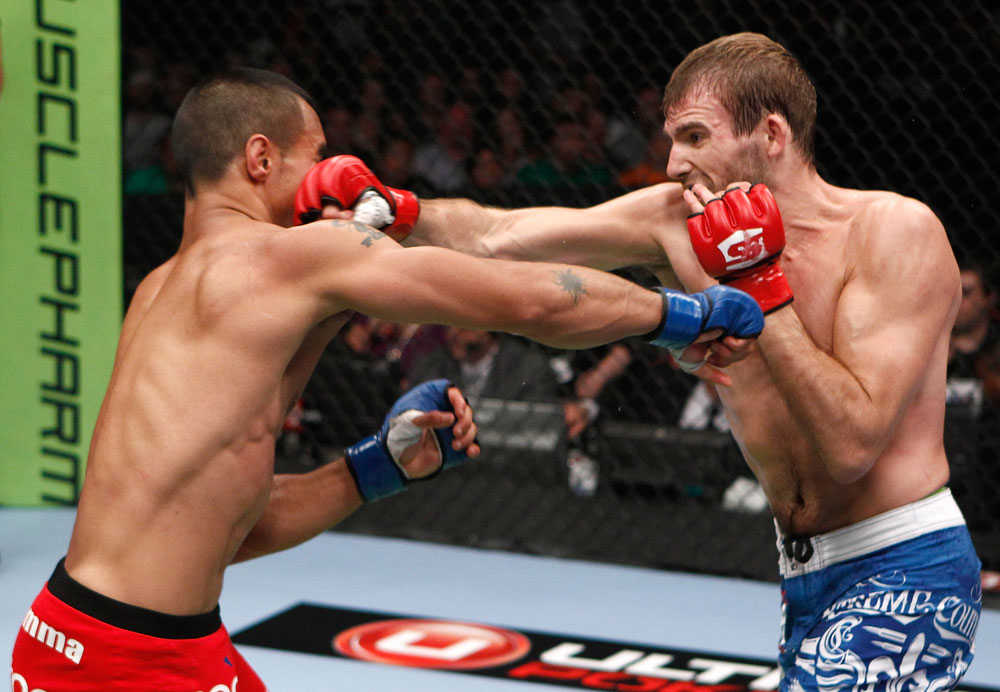 A lightweight by any other name would be just as promising.

In the Summer of 2010, the story was that UFC Hall of Famer Randy Couture’s son was making his pro debut in Strikeforce. After six fights in the cage, the story is rising 155-pound talent Ryan Couture, who is riding a three fight win streak, preparing for his final performance in Strikeforce. While separating himself completely from the indelible mark his father left on this sport is wholly unrealistic, the Couture progeny is certainly well on his way to forging his own MMA identity, having had his hand raised five times inside Strikeforce while getting a high profile bout against a perennial top contender in the company’s last event.

“It's something that is in the back of my head and is added to my list of motivations to go up to training everyday and be the best fighter I can be,” asserts Couture. “It was sort of the challenge that was laid out to me when I signed with Strikeforce: to prove that I'm more than just a last name. I think I've done that, but there is still more to do. I don't, in any way, measure my success to what he accomplished. I think that would be crazy. It's just one more reason to strive to be the very best that I can be and to make sure that anyone out there that says I only get what I get because I'm Randy's kid is wrong or really can't say it with a straight face. The harder I work and the more I accomplish, the harder it is going to be for someone to try and say that about me.”

In just over two years time, the 30-year-old Washington native has ascended the divisional ranks by compiling submissions, decisions, and even a third round TKO. Getting a win in a regional promotion’s cage can be tough enough for an up-and-comer, but Couture made the jump from the amateur ranks right into televised combat and did so victoriously. As mentioned, there was the additional pressure he felt because of his surname, but, way beyond that, Couture only began his venture into amateur MMA a year prior to trading fists and feet on Showtime. Instead of focusing on a 5-1 lightweight as a son succeeding in his father’s sport, we should view this as a former bank worker with a mathematics degree who in his late-20s became a professional athlete in the ultra-competitive sport of mixed martial arts.

“It feels like a lifetime ago in a lot of ways,” tells Couture. “It is hard to even put myself into that mindset I had going into that first pro fight in 2010. I feel like I've grown and changed and matured so much as a pro fighter. I've learned so much and learned how to prepare and added so many tools to my toolbox. I think I am night and day different now than I was then. It's been a great ride and I’m really thankful to have had the opportunity to come up through Strikeforce the way I did. It laid down that foundation for what I hope is a long and successful career. I don't think there could have been a better way for me to get my start as a professional fighter than doing it with Strikeforce, on Showtime, under those bright lights, and having to learn on the fly. I feel like the level of competition has come up at just the right pace and I think I'm ready to do some big things this year.”

In 2012, Couture’s emergence as a possible lightweight force was on full display with back-to-back wins over game opponents Conor Heun and Joe Duarte. The former, a then 9-4 black belt in Brazilian jiu-jitsu who had taken on several name foes, was stopped by Couture in the final round due to strikes. As for the latter, Duarte was riding a five fight win streak, including a headlining unanimous decision win over UFC veteran Jorge Gurgel the year prior. The Guamanian adversary with twice the amount of experience was a tough test, but Couture walked out with a well-earned split decision.

“We knew Joe hit hard and had a pretty solid ground game and wrestling,” reveals Couture. “We thought I had the advantage if I could get to the clinch, put him on the fence, take him down, work top position, and either do damage there or work submissions. That was the game plan. He proved to be a lot tougher to take down and hold down and a lot more aggressive against the fence. I spent more time out at striking range than I would have liked, but I did what I needed to do and got the takedowns needed to eke out that decision. I'm happy with the win, but would've liked it to be more clear cut.”

Clinch, fence, takedown, top-position? Sounds like a chip off the old three-time US Olympic Greco-Roman wrestling team alternate block, but the bout with Duarte was for the most part a striker’s duel. While he didn’t get to truly execute the designed game plan, Couture showed comfort standing by throwing a bevy of varying kicks, improved movement and defense, and an overall maturity in the stand-up department. Couture’s evolution and confidence as a striker is thanks to his diligent work with Xtreme Couture’s head boxing and Muay Thai coach: Tim Lane.

“I've gained a lot of confidence, especially in these last two fights,” explains Couture. “I've fought stiffer challenges and more established guys who bring more skills to the table and more impressive resumes. Knowing that I can get in there and not only compete with those guys, but beat them has really upped my confidence. It motivates me in training and gives me confidence in what I have been doing and making me continue to get better, so I can beat better guys. I feel like these last two training camps have built on each other and will carry momentum into this one. I'm going straight ahead into this one and really looking forward to testing myself with someone on the level of KJ Noons.”

Up next for Couture is a January 12th showdown with Strikeforce stalwart KJ Noons. Inside Strikeforce’s cage, there is no greater litmus test to see if you’re the real deal or not than taking on Noons, with his 11-5 in MMA, 11-2 in pro boxing, and something remarkably similar in pro kickboxing records. The Hawaiian native has become synonymous with frenzied, Fight of the Night-esque performances against the best of the brand’s roster. When Couture was making his Strikeforce debut, Noons was battling toe-to-toe with Nick Diaz to a five round decision for the Strikeforce welterweight championship. Simply stepping into the cage with Noons means Couture is a 155-pounder worth knowing, but a win would solidify Couture as lightweight worth fearing.

“I have watched KJ for a long time, before I fought professional and even before that was a realistic thing for me,” admits Couture. “It's going to be weird and kinda cool to be standing across the cage from someone I've followed for a long time, that I've always enjoyed watching fight, and kind of looked up to in a way. It is a sense of accomplishment to even have that opportunity, but I have to shift gears and look across the cage at him as someone I'm going to beat. Over the course of training camp, that's really started to click. I'm feeling confident going into this fight. As far as name guys and top level guys that Strikeforce has to offer, he's style-wise one of the best matchups for me. I think it's pretty clear-cut that he's going to want to box and brawl with me and I'm going to want to make him wrestle. Whoever can impose their plan is going to win this fight. I like that it's a challenge, but I also know it's doable. I know it's a fight I can win and I just have to execute and be sharp on fight night.”

Besides Noons’ prolific striking acumen, Couture needs to be ready to push the pace from bell to bell because top tier fighters like Diaz, Jorge Masvidal, and Josh Thomson had to against Noons. “I think if you're not training for a fight to go 15 hard minutes then you're crazy; you can't plan for a fight to end early,” says Couture who has heard the scorecards read in three of his last four outings, so he knows his gas tank will be there. “If it comes down to that takedown in the last 30 seconds, like the last fight, then I'm confident I'm going to get it. I don't care if it's a gut check fight where I'm puking in a bucket backstage afterward from being so exhausted or if I can get it over quick that's fine too. I'm ready and mentally prepared either way to do whatever I have to do to get the win.”

To prepare for this scintillating Strikeforce scrap, Couture has been training, like always, with the highly regarded crew at his dad’s gym Xtreme Couture in Las Vegas. Besides the previously mentioned striking coach Lane, Couture has been learning the keys to the clinch from his former UFC heavyweight and light heavyweight champion father, sharpening his grappling skills with Neil Melanson and Kyle Griffin, and getting solid work in with a steady stream of quality fighters like UFC veteran Frank Trigg. For Couture, finding his identity as a fighter in the gym will turn into wins in the cage, which will strengthen his unique identity with the fans.

“I think for me the most important part of MMA is wrestling and especially for me with that being my go to, being on the ground and in the clinch,” tells Couture. “The big things I've been focusing on are finding ways to avoid getting hit with the big shot; I've been fighting guys with heavy hands in these last two fights and closing the distance and being more effective in those positions: closing the gap, getting into the clinch, and finding ways to do damage or getting the takedown from there. I feel like those are in my best interest and I feel like I'm going to find very few guys out there that will not be in my best interest to do that to. I've just really been dialing in what my style is going to be and what will work best for me to win fights and sharpening up those tools.”

This Saturday at the Chesapeake Energy Arena in Oklahoma City, Oklahoma, Couture will jump into Strikeforce’s deep end to tangle with Noons. “He's going to be standing on one side of the cage looking to take my head off my shoulders and I'm going to be standing on the other side of the cage looking to get into his face, put him on his back, and to either pound him out or choke him out,” affirms Couture, who believes he’ll triumphantly wave goodbye to Strikeforce with the biggest win of his young career. “I think I'm more focused and I'm fighting smarter than I ever fought before. I'm coming in with a purpose to apply my game plan and to do exactly what I've trained to do. And I think the fight will go my way.”

A win over Noons is about the sweetest smelling victory a lightweight can have in Strikeforce, no matter what your name is.