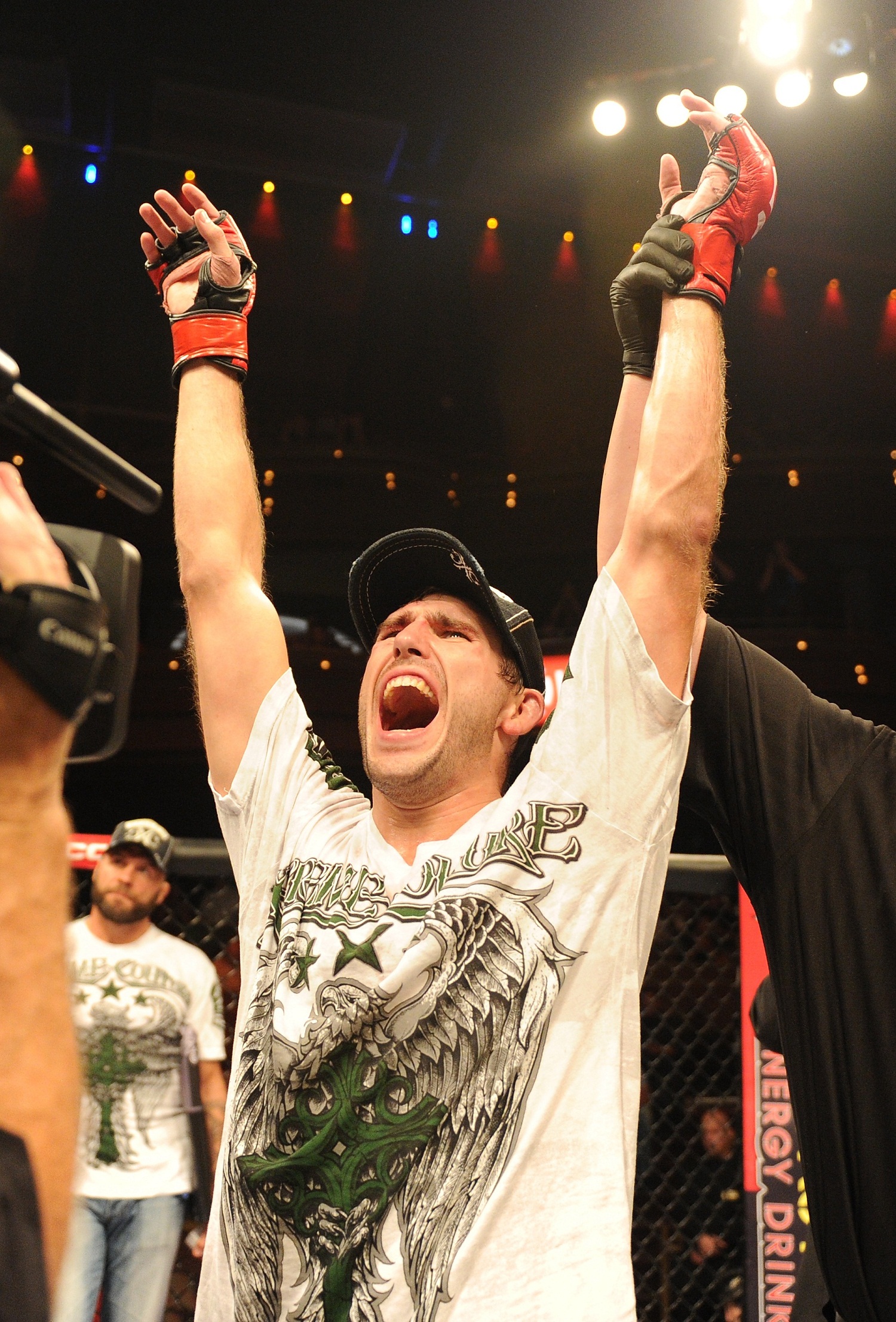 For every son or daughter that successfully follows a sports legend parent into a sport (say, Laila Ali becoming a boxing champ years after her father Muhammad became “The Greatest,” for example) there are thousands of kids that stay far away from the trades of their parents. Most are probably just not talented enough to emulate anything resembling their parent’s success, but many others are likely just not interested in all the pressure and expectations that would come with trying.

Former heavyweight and light heavyweight champion Randy Couture is perhaps the best mixed martial arts fighter in the sport’s young history, but that has not stopped his son Ryan, who faces Joe Duarte this Saturday on the next Strikeforce card in Portland, Oregon, from becoming a fighter himself.

Couture spent two years in the amateur ranks and has been a pro for two years, with perhaps his most significant victory thus far coming in the form of his TKO win over Conor Heun in March. Couture insists that he doesn’t dwell on the idea that his dad is THE Randy Couture – legendary champion and movie star – during training or when he fights. Because of this, the lightweight doesn’t feel pressure to fill his dad’s shoes.

“It’s not really something I think about at all,” Ryan says. “I knew it was a big shadow to walk in and knew it was something I’d be asked about when I began competing. I know that it has and will continue to affect people’s expectations of me but I’ve never even hesitated. It hasn’t been a detriment. As a result of accomplishing the things he has, he blazed the path for me and made it that much easier. I think any of the pressure I could have put on myself I already dealt with when I made the decision to come to Las Vegas and then when I decided to start fighting.”

Couture has a math degree, and after college had a 9-5 bank job in Washington state. He’d wrestled growing up and started training Brazilian Jiu-Jitsu after work. But then his dad called him and made him an offer to come and work at Randy’s Xtreme Couture super gym in Las Vegas, NV.

The younger Couture ultimately decided to make the move, and though his initial role was to help lead the franchising operations for Xtreme Couture and not to be a fighter, he began taking classes. Ryan loved the classes so much that he started working out with the amateur team and began competing.

Soon he became good enough to receive an invite to join pro practices, and since that time has put together a solid 4-1 record in the pro ranks and now fights for one of the biggest MMA promotions in the world.

Couture says he much prefers the life of a professional fighter over that of a banker. It’s the 9-5er’s dream – pack up, move and become a professional athlete – and the 29-year old knows it.

“I’m still almost coming to grips with the fact that this is my reality,” Couture says. “I feel like I could wake up tomorrow and not have that be the case. But with each training camp and each fight I develop more and it starts to feel real and like I did the right thing.”

Couture says that his dominant win over the tough and well-known Heun helped give him confidence to believe that he is indeed in the right profession. Not being tied to a desk isn’t the only benefit to being an MMA fighter for Ryan. He says that he and his dad have grown closer as a result.

“It’s definitely an excuse for us to spend more time together,” Couture says. “It has helped us get even closer, having him be involved in these training camps. It can still be hit and miss because he’s on the road a lot, but I really enjoy having him involved when he’s in town. His presence adds a boost of confidence and, I feel, brings the level of the whole team up. We’re kind of getting to know each other in a different way. I just knew him from being around the house and having that family relationship. My being in Vegas with him and fighting has just added another dimension.”

Ryan says that his dad gives him useful advice, but that simply observing his example has been most useful. “I think the most helpful thing has just been the example he sets,” Ryan says.

“His whole approach to the game is great to learn from. He doesn’t take it too seriously and doesn’t stress too much. Something he’s always said is ‘If losing a fight is the worst thing that happens in your life, you’re doing pretty damn well.’ From a technical standpoint he fine tunes things so much and I learn so much from him. Every time we work out together I pick up a little something new.”

Couture is taking everything he’s learned so far against the very experienced Duarte on July 14th. Just as his last fight, Ryan believes that this is another opportunity to prove that he belongs.

“I think Joe’s a stud,” Couture says. “I was there and saw his last fight with Jorge Gurgel and it didn’t even click to me that I might fight him sometime down the road, but here we are two fights later. I think he brings a lot to the table. He’s a well-rounded guy. He’s got solid jitz and a heavy right hand. There will be a lot of different things to navigate for me to get the win. But I’m excited. It’s another step up, another big challenge. I’m excited to rise to meet the challenge and show that I belong and that I made the right decision.”