Ryan Couture: Arriving Ahead of Schedule

"I think that anybody who legitimately goes and watches my fights can see
that and see the improvement and see that I’m the real deal." - Ryan Couture 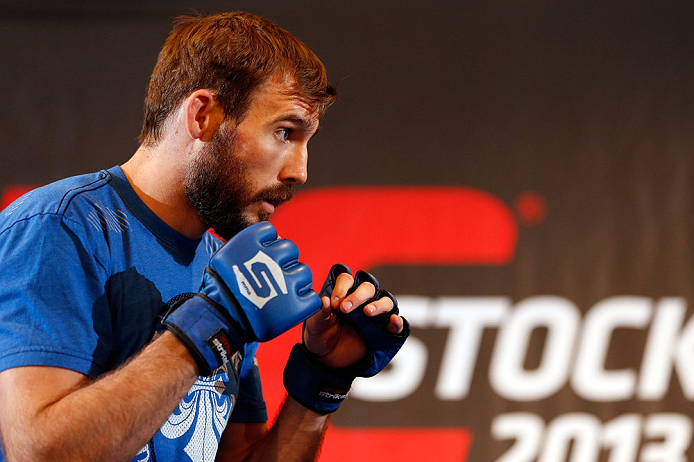 You might think that as the son of UFC Hall of Famer Randy Couture, Ryan Couture has been walking a gold-paved road on his way up the MMA ranks and into the UFC. You would also be wrong.

Yet while being Ryan Smith or Ryan Johnson may not have gotten him a UFC contract after seven pro fights, the Las Vegan has more than earned his right to be in the UFC on FUEL TV co-main event against Ross Pearson this Saturday after scoring Strikeforce wins over Conor Heun, Joe Duarte, and KJ Noons. Yeah, the name of his father will inevitably pop up in any pre-fight related conversation, but Ryan Couture is his own man.

“We’re still talking about Dad in every interview, so that will never change, but I feel like I’ve established myself as a legitimate fighter, and no one can argue that,” said the 30-year-old. “I think especially once I get this first UFC win under my belt, then that will go that much further towards wiping out anybody who wants to naysay and say I’m just riding the coattails of the family name. That’s always gonna be there to some extent, and there’s always gonna be someone hoping to get a rise out of me or get some attention by talking like that, but I’m proud of what I’ve accomplished and happy with the work I’ve been able to put in and the improvements I’ve been able to make. I think that anybody who legitimately goes and watches my fights can see that and see the improvement and see that I’m the real deal.”

Speaking of “The Real Deal,” in England’s Pearson, Couture isn’t getting a fellow newcomer or a prospect on the rise for his first UFC bout. He’s fighting a former Ultimate Fighter winner with as many Octagon victories as Couture has in his entire pro career (six), and a battle-tested vet who is coming off a main event knockout win over George Sotiropoulos last December. But that’s just the kind of matchup Couture would expect for his UFC debut.

“I just fought KJ Noons,” said Couture, who scored a split decision win over Noons on the final Strikeforce card in January. “That guy’s a former champion, he’s been in there with Nick Diaz on multiple occasions, so I wasn’t expecting a step down from that. Ross is right on par with that level of competition that I expected, and I think it’s good. I think I’ve worked hard and performed and shown them what I can do, and this is just a testament to that.”

And even though Pearson admitted recently that he liked the bad blood leading up to his win over Sotiropoulos last year, he’s not going to get any ammo from the classy and soft-spoken Couture in that regard.

“I’m a fan of his,” he said of Pearson. “He’s got a fun to watch, aggressive style, he’s a dangerous striker, and that always makes for an interesting matchup with me, because if I can’t get the fight to the floor, which is no easy thing to do against Ross, then it’s gonna make for another exciting fight like the last one was, though hopefully without the near knockout issue I had against KJ.”

Couture chuckles when referring to the segment of the Noons fight when he got rocked and was put in serious danger of being stopped for the first time in his career. You can do that when you weather the storm, clear your head, and come back to win a hard-fought decision, and after getting the biggest win of his two and a half year pro career, it’s just another notch in his belt.

Yet despite the progression he’s shown in his game ever since arriving on the MMA scene, Couture admits that without the Zuffa purchase of Strikeforce and the subsequent closing of the promotion, he was probably not going to be on track for a UFC berth so soon.

“I think the biggest reason that it has happened is that when Zuffa bought out Strikeforce, the learning curve got steep, and the make or break or turning point for me was that fight with Conor last March,” he said. “That was my first big step up to an established opponent, and the way I was able to rise to the occasion and then really step things up in training and go out and perform as well as I did on fight night sort of set the tone. Then they kept raising the bar every fight out, and from that first experience I had the confidence to know that I was capable of working hard enough to go out there and win those fights, even though technically on paper I probably wasn’t supposed to. So that was the turning point where it seemed attainable, but if you would have asked me just starting out how long it would take, I would have thought I’d still be a long ways away.”

That long ways away has turned into one day away, and if Couture is nervous about his debut, he’s not showing it. Then again, that’s been a hallmark of his career thus far. Despite being the underdog against bigger names, when it came time to shut the gate and ring the bell, he was there to fight and he found a way to win. So when it comes to the first time UFC jitters, it’s not a huge concern, especially since he’s had a better insight into the big fight atmosphere than most debutants.

“Every fight I’ve ever had has been televised and has been on a pretty big show and been professionally run, and that fight week lead up for the last five fights now since the Zuffa buyout, the way that they do things is gonna be the same, even though it was Strikeforce and now it’s the UFC,” he said. “So all of that fight week stuff, I feel like it’s gonna be old hat for me and very familiar, and then the experience of getting to corner Dad for some of his big fights, even the one overseas in Manchester, and being right there cageside at UFC events, including the Toronto show with 55,000 people there, I think that will take away some of the jitters that I would have had over the magnitude of the crowd. So I don’t foresee it being a big issue. That said, before my first pro fight, I said ‘I don’t feel any more nervous than I did for the amateur fights,’ and then afterwards, that release that I felt and that load off that I felt, I knew at that point that I had been feeling a lot of pressure and was trying to ignore it. So it could be the same story here; we’ll see once the fight’s over. But as of now, I feel like it’s more of the same.”