"It really motivates me that everybody is counting me out in this
fight." - Ryan Bader 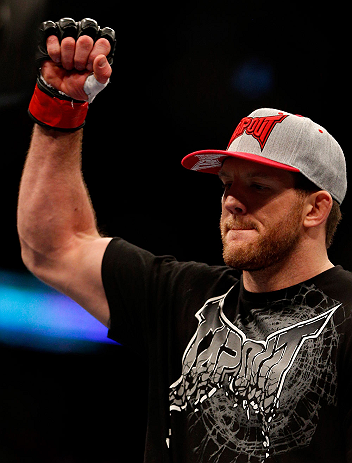 Ryan Bader doesn’t really mind if you call him the underdog leading into tonight’s UFC Fight Night main event against Glover Teixeira. Just don’t make it as if all the Brazilian contender has to do is show up in Belo Horizonte to get the victory. That’s the kind of stuff that has Bader not only fired up to win, but to spoil Teixeira’s plans for a world title shot.

“I like being the underdog and playing that role because it keeps the pressure off me and it frees me up basically,” he explains. “That’s when I fight the best. But what does kind of piss me off is when people are already talking about this fight like we’re not really even fighting, like it’s a gimme, with him talking about fighting (light heavyweight champion Jon) Jones, and Jones coming out and talking about his fight with Glover coming up even though they both have fights. And the fans are talking about a title shot with Glover and how his fight with Jones is gonna be. But he has a tough fight on September 4th and I’m gonna go out there and win. I’m gonna beat him, so all that talk is gonna be for nothing.”

It’s as blunt a statement as you’re going to hear from Bader, one who doesn’t deal in trash talk or bold proclamations. And the way he sees it, this fight isn’t personal, it’s a declaration that when you dismiss an athlete and competitor like the Ultimate Fighter season eight winner, you do so at your own peril. Or in other words, don’t poke the bear with a stick; it usually doesn’t end well for the guy with the stick.

“It really motivates me that everybody is counting me out in this fight,” he said. “I know the type of fighter I am and the one I haven’t even shown yet, so I look for this to be that fight where I’m making a statement and beating a highly regarded guy that’s been undefeated for a long time and who the UFC even said they’re gonna give him the next title shot with a win. There’s a lot of pressure on him and not a lot on me, being the underdog and playing that role, and I get to upset everybody’s plans.”

It is a peculiar situation. Yes, Teixeira is the real deal and a fighter on a 19 bout winning streak that includes four UFC victories. But Bader is no slouch, having won eight of 11 UFC bouts, with his only losses coming against future or former world champions Jon Jones, Tito Ortiz, and Lyoto Machida. And when he’s on, like he was in blitzes of Vladimir Matyushenko and Jason Brilz, it’s impossible not to appreciate the skills and athleticism he brings to the Octagon.

“I’ve fought four champions in my last six fights, and my only losses are to champions or former champions,” he said. “I stood across from the Who’s Who of MMA and Glover hasn’t. I’m not taking anything away from his long winning streak, because that’s hard to do regardless of who you are, but he hasn’t fought the guys I’ve fought, he hasn’t had that experience of the big fights, and there’s a lot of pressure on him. He’s fighting in his home country, the UFC said he’s gonna get a title shot with an impressive win, and if you tell somebody you’re gonna get this, all you gotta do is go out and beat Ryan Bader, that’s a lot of pressure. This is his fight where he has everything to lose.”

And Bader has everything to win. Luckily, it comes at a time where it appears that his MMA apprenticeship is over. That doesn’t mean in a fighting sense, but in a way in which the 30-year-old has experienced all those “other” things in the fight game that don’t show up on a win-loss record. He’s fought in Japan, Australia, and now Brazil, he’s been through press tours, he’s been booed, and he’s faced the challenges that come along with facing icons of the sport. Tonight, the one out of the Octagon issue that he will likely have to stare down the hardest will be the crowd, and he knows it, but isn’t sweating it. Not anymore.

“I’ve been booed a little bit in that fight (with Ortiz), and then in Japan when I fought Rampage, and although they’re a pretty quiet crowd, they were still booing me pretty good right off the bat when I walked out,” he said. “I think I’m over that now. I’ve been in the game long enough to have people talking s**t on Twitter and social media, and I have thick skin now. Some boos at the arena, and knowing that I’m going to get booed going in there as far as the chants and all that stuff, I know that coming in, and I was able to experience that when the Americans fought the Brazilians down in Rio when I was there. It is what it is. I just hope it doesn’t sway the judges at all.”

Or better yet, why not involve the judges at all, as Bader would like nothing more than a spectacular finish of a man who hasn’t been finished since his pro debut in 2002. Doubt that Bader can do it? He doesn’t, as he’s no longer just a wrestler with some power.

“I’ve worked hard to evolve,” he said. “When I came in, I was purely a wrestler with an overhand right. I hit hard and that was about it. But I’ve honed my skills, I’ve been in the gym, and I put the work in. I had a short fight with Matyushenko, so I feel that I haven’t even really shown my true potential in a fight yet, and I’d like to in this one. We’ve got all the time in the world with this five rounder and I feel I’ve grown a ton in my standup and jiu-jitsu as far as being more efficient and more technical, and I believe I am dangerous everywhere. The biggest thing of all that I’ve been working on is putting it all together, and I feel I’m finally hitting that stride where I need to be.”

Perfect timing for that, eh? Not to mention a perfect time for Bader to upset Teixeira’s apple cart and announce his own arrival in the top ten.

“I’ve worked hard, and this is a fight where he’s undefeated in the UFC and has all that hype and it’s kind of a redemption for me,” said Bader. “I’ve been in this position before with Jones and I was young and maybe it was too fast for me, but now is my time, and I’m gonna go out there and beat him in front of a hostile crowd and it’s gonna be that much sweeter.”