Ryan Bader: Prospect Days are over

"I feel like I’m the fighter I’ve always wanted to be now, so now’s the time." - Ryan Bader 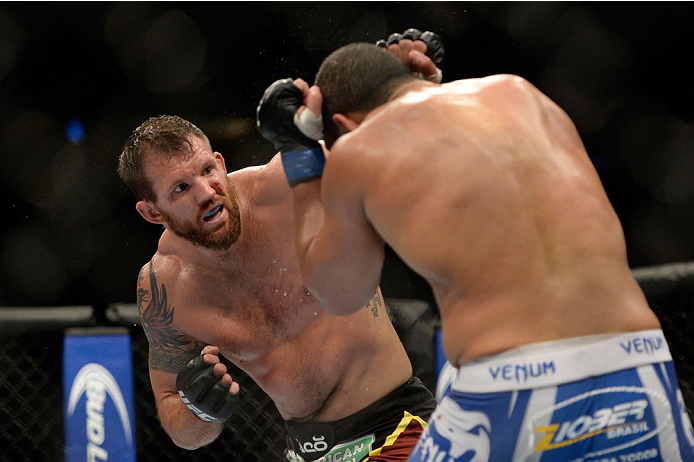 Just like a lot of things you notice once you pass the big 3-0, Ryan Bader is well aware that at 31, times are a changin’ for him in the light heavyweight division. Not that it’s a bad thing that some of the prospects of the UFC tell him things like “I’ve been watching your fights for years.”

“Am I becoming the veteran, the old guy in the sport?” Bader laughs. “It’s crazy. I still think of myself as that hungry, up and coming guy, so it is a little nuts to think about.”

With age comes a lot of things, the best of which are wisdom and experience, and when you couple that with an “old guy” reaching his physical prime in the fight game, Bader can still be hungry, but he’s no longer a prospect. These days, he’s a legitimate 205-pound contender, officially number eight in the UFC, and heading into his UFC Fight Night main event against Ovince Saint Preux this Saturday in Maine, he’s on the verge of even bigger and better things.

“It’s a fight I’m excited for,” he said. “I’m excited to be in the main event again and bring the UFC to a new market in Bangor, Maine, and I want to bring a good, exciting fight. I want to finish this guy, make a statement, and make it three wins in a row and get that next fight against a top five guy and make my run now. I feel like I’m the fighter I’ve always wanted to be now, so now’s the time.”

It took him a while to get here, though there have always been glimpses of who he could be in the sport. He took The Ultimate Fighter eight title with relative ease in 2008, blasted out Keith Jardine and decisioned Rogerio Nogueira in 2010, and won the biggest fight of his career in 2012 when he defeated Quinton “Rampage” Jackson. But the high-profile losses to Jon Jones, Tito Ortiz, and Lyoto Machida came at inopportune times and slowed his progress. A main event defeat to Glover Teixeira in September of 2013 was particularly crushing, considering that moments before he was stopped, he had the number one contender a punch or two away from defeat.

But if you learn from your mistakes and setbacks, then you move forward, not backward. Bader learned, and the evidence was in his two most recent wins over Anthony Perosh and Rafael “Feijao” Cavalcante. Still showing the same amount of skill on the mat and the feet, Bader displayed something that he didn’t have a few fights ago – patience.

“I learned a lot from that Glover fight about being patient and picking my shots and not getting wild,” Bader admits. “I’ve been there in different fights before earlier in my career where I did empty the gas tank. But I’m in a lot better shape now than I was back then, and now I’m definitely picking my spots.”

He’s also remembered what got him to the big show in the first place – the wrestling that won him All-American recognition twice at Arizona State.

“If you look at the last two fights, I was dominating in every position the whole time, and when you look back at my losses, it’s when I went out there and tried to kickbox the whole time and not use my wrestling,” he explains. “And every time I’ve wrestled, that’s worked out to my advantage. And I’m not saying wrestling all the time, but throwing that in the mix where I’m using every attribute and mixing them together. I have a good mixture in my game right now with my boxing and my wrestling.”

In addition, Bader enters this weekend’s headlining gig as the man who has been there before. Sure, Saint Preux is an ultra-talented fighter with a five-fight winning streak in his back pocket, but as Bader knows better than most, that first main event or co-main in the UFC can do more to mess with your head than anything your opponent can do to you.

> Read what Dana White had to say about Ryan Bader

“I’ve been there before and I know what it’s like the week of the fight,” Bader said. “He (Saint Preux) has been in these fights where he’s fighting guys that aren’t really ranked in the top ten. For me, I’ve main evented, I’ve been in co-mains and on Pay-Per-Views, and I know what to expect. I know I’m going to perform when I get in there. I’ve had these big fights, and I stood across the cage from the who’s who of MMA, so nothing fazes me anymore. Whereas when I was younger, standing across from a Rampage or Machida, it kind of gets you a little bit. Not anymore. It really is just another day.”

Another day that can change his life considerably should he win big. That’s exactly what the Arizonan is expecting, and then he’s ready to make his assault on the 205-pound elite. Surprisingly, he’s okay with the fact that it’s taken a little longer than most expected.

“If I made it there when I was younger and more inexperienced, it would have been worse in the long run,” he said. “I might have gotten to a high-level place as a contender or champion, and then I might have paid for it with a bunch of losses in a row. I just wasn’t that well-rounded and I wasn’t the fighter I knew I could be. Now I believe I am that fighter, and when I mix everything together, I’m hard to beat for anyone in this division.”