“I broke my hand (against Perosh) but I was more composed and I wasn’t rushing things.” – Ryan Bader 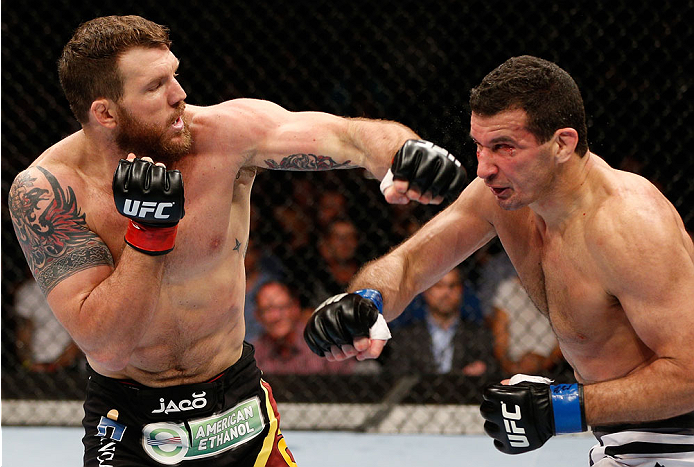 Wrestlers have a unique name for the fitness phenomenon known as CrossFit. They simply like to call it wrestling practice.

For over fifty years, amateur wrestlers, whether they be high school, collegiate or Olympic champions, have been training for explosive power in short bursts, so that they can go all out for three, two minute periods in which their bodies and minds are put to a test most other athletes would fail.

It’s no wonder then that wrestlers have been among the most successful fighters inside the Octagon.

“Treadmill sprints, for instance. We look at what kind of inclines I hit, and then the speed for those inclines, or my distance sprints, my best 400 meters time, sparring markers, for time and explosiveness, and I’ve surpassed all those markers in this camp, and that means I’m in shape. Probably the best shape of my fight career. I feel great. The experience I’ve had since I started my fighting career six years ago, it’s like night and day.”

All of that work bodes well for fight week, where Bader will focus on repairing and healing before he steps into the Octagon Saturday night against one of his toughest opponents.

“I’ve fought everybody who is anybody in the division,” he says. “But Feijao is special. He’s got a lot of power in his hands and he’s excellent on his feet. He’s put a lot people away with his right hand. Also, he’s been in a lot of trouble in fights and suddenly he can end a fight with combination. He also has really, really good takedown defense. He’s dangerous everywhere the fight goes.”

And while that very well may be true, it’s Bader who has become more and more dangerous everywhere the fight goes, and who has fought the best of the best in the division, from champion Jon Jones to former champions Lyoto Machida, Rampage Jackson, Tito Ortiz and of course, a bevy of heavy hitters along the way to those fights.

“I’m surprised I had the level of success that I’ve enjoyed,” said The Ultimate Fighter season 8 winner.

“Back then I was just a good wrestler. I didn’t know how to throw a punch. My stance was off. I didn’t know how to cut weight. I remember when I was in college, healthy meant a salad with dressing and croutons all over it. I thought pasta salad was a smart way to eat healthy. Now it’s so scientific. I’ve got the right people around me now, and I’m training smarter now. Better later in my career than never.”

Change, however, usually means taking a step back before taking leaps forward, and there were some growing pains for Bader.

“The last few years I’ve been relearning my boxing, my footwork, my head movement, my jab,” says Bader. “I want all my losses back, but most recently with Glover Teixeira, I had him on the ropes and I had him stunned and I made a mistake and just opened up and lost. And when I talked to him after the fight he told me he was basically out on his feet and it hurt to hear because I was right there and I goofed. But I’ve learned to stay patient from that loss, and it worked well against Perosh.”

“It was a good night but that’s behind me,” he said. “I am happy that I was able to better apply what I’ve been training for so long now when it counts, in the ring. I broke my hand, but I was more composed and I wasn’t rushing things.”

Bader will need all that patience and experience against Cavalcante, who himself has faced the likes of Dan Henderson, Mo Lawal and Mike Kyle in a career that began by him training with Antonio “Minotauro” Noguiera eight years ago and that culminated with a Strikeforce championship, something that doesn’t go lost on Bader.

“You will see me take another run at the title,” he said. “I just turned 31 and I’m not as young as I used to be. Before we were on The Ultimate Fighter, we were lucky to get a two thousand dollar a month sponsorship so we could focus on being fighters, but our coaching staff were the Lally twins; they were our coaches for everything across the board; striking, jiu jitsu, kickboxing, so we never had that specialized disciplined training, so I relied a lot on my wrestling and got by with what we learned. Now that I’m a little older and have a little more money I can hire that one guy who focuses just on wrestling, one guy on strength and conditioning, one guy on jiu-jitsu, so while it gets easier to afford, well, as we get older we now have to train differently, so it’s a balance, but I think I’ve finally figured out the balance. We’ll see come fight night.”