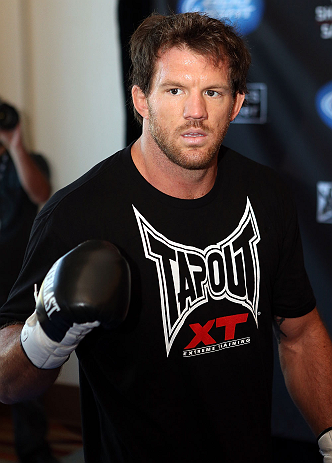 Ryan Bader has his college degree, a BS in Justice & Social Inquiry with a minor in Business from Arizona State University. But when it comes to fighting and the School of Hard Knocks, his degree took a little longer, and was probably a bit more painful.

These days though, after an undergraduate program that saw him face off against four former or future UFC champions (Jon Jones, Tito Ortiz, Rampage Jackson, and Lyoto Machida), he feels like he’s reached the point where he’s ready to take his own game to the championship level, starting with his Saturday bout with Vladimir Matyushenko.

“I’ve been through all the media stuff, I’ve been through big fights, I’ve been in big fights in other countries, and I’ve been across the Octagon and looked at guys like Machida, Jones, Rampage, Tito, and (Rogerio) Nogueira,” said Bader. “My first one was Keith Jardine. I was looking across and thinking ‘I watched this guy when I was in high school and college.’ So it was kinda surreal. But I’m over that now and it’s just another opponent. And while I’ve had ups and downs, the one thing in this sport is that it’s really easy to go down but real easy to go up. I was on a two fight losing streak, I lost a fight to Tito, who I was supposed to beat but I didn’t, and I was at a low. I came back and beat (Jason) Brilz and beat Rampage, and I was in position against Machida where if I won impressively I would get a shot at a title. So in this sport, things can change very, very quickly. You have your ups and downs, but as long as I know I’m getting better and coming into every fight with more tools, you can’t really do anything else.”

Marked for stardom as soon as he won season eight of The Ultimate Fighter, Bader’s apprenticeship lasted all of two fights (against Carmelo Marrero and Eric Schafer) before he was tossed in the deep end against Jardine at UFC 110 in 2010. Bader won that fight via third round knockout, and then it was off to the races. Nogueira, Jones, Ortiz, Brilz, Jackson, Machida. When all was said and done, Bader emerged 3-3 from those six bouts, but he gained valuable experience and emerged a better and wiser fighter. And he saw the difference between early opposition and guys who had been to the MMA mountaintop.

“There’s definitely more composure and something there where they’ve been there before, they’ve been in those big fights,” he said. “And those type of guys, with the exception of Jones, have so many fights underneath their belt, they’re older, they’ve been in the game for a long time and I want to say it’s another day in the office to them, but they handle everything really well. I can definitely tell that difference from other opponents with fewer fights that haven’t been in those big fights. They just have everything together, and that’s what probably made them champions.”

And at the UFC level, it’s not just being able to handle your business in the Octagon that’s essential; it’s being able to deal with everything else, like media obligations, pulls on your time everywhere, and adapting to life in the spotlight.

“You definitely have to be able to handle it, and you have to have good time management,” said Bader. “One of my good buddies, (UFC heavyweight champion) Cain Velasquez, we were talking about it and how he’s leaving on weekends to do PR stuff and all that in the middle of a camp, and you’ve got to get in your training when you can. And I think that’s a big part of it. A lot of guys have their first big fight and you have to deal with all the different media and stuff, and it can add to the nervousness when you look at it and say ‘wow, there’s so many eyeballs and so much attention on this one fight, I hope I perform.’ That can compound the nervousness and the emotions of wanting to do well. You go through that a few times and you get the hang of it and it’s part of the deal. Those guys that master that and master everything outside the cage definitely do a lot better inside the cage also.”

Which brings us to Saturday night and the 29-year-old Bader’s first bout since his knockout loss to Machida last August. In Matyushenko, Bader will be facing a hard-nosed wrestler with heavy hands, much like himself. The difference is that Bader has a decided youth advantage on the 42-year-old Matyushenko, who has also been out of action due to injury since December of 2011. Add in the fact that “The Janitor” isn’t the nightmare stylistic matchup that Machida was, and Bader’s pretty confident heading into this one.

“Going into a fight like this, I love fighting wrestlers,” said Bader. “If you look at my stoppages and good fights, they’re all pretty much against wrestlers, and Matyushenko’s no different. He’s a strong guy, he’s basic, but very, very tough and he’s very experienced with good wrestling and good power. He’s not flashy, but he is a very tough fighter. But when we engage, I want him to go ‘wow, he’s a lot stronger than I thought he was, he’s a lot faster than I thought he was.’ If you get that in somebody’s mind, it’s all downhill from there.”

Ryan Bader has paid his dues. Now it’s time to get some payback of his own from the 205-pound elite, and he’s planning on making 2013 the year he does just that.

“For me, I still haven’t had that fight where I looked back and said ‘hey, I put it all together, I looked great,’” said Bader. “I can do that in the gym and I know that I have it, but still in my mind, I haven’t had that fight where I looked back and say everything looked good. And I want to have that fight in this fight. At the end of this year I want to have everything put together and fight like I know I can. If I do that, I feel like I’m pretty much unbeatable, and I want to be that fighter.”