Ruslan Magomedov: One Step at a Time

"I don't pick fights. Whoever the UFC puts in front of me, I'll fight him." - Ruslan Magomedov 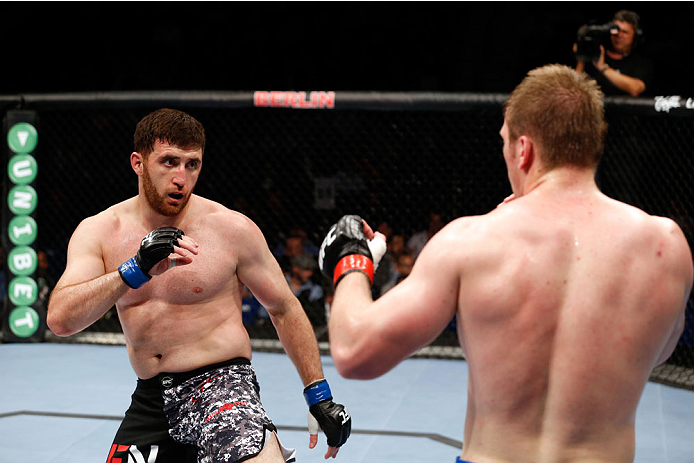 There are perks to being a heavyweight, not the least of which are the expansive boundaries of the division’s weight limit that allows many of the athletes that populate the ranks to compete without cutting weight.

The lightweight and welterweight divisions both count greater than 100 fighters amongst their ranks, making the journey from newcomer to contender a lengthy process for even the most promising of prospects. A three-fight winning streak might leave a fighter in the middle of the pack, needing a couple more high profile victories in order to crack the Top 15.

That’s not the case at heavyweight, where each victory has the potential to make the journey to the top of the division far less daunting. With just north of 30 fighters filling the big boy ranks, cobbling together a two- or three-fight winning streak can put a competitor on the fringes of contention and into the rankings.

Ruslan Magomedov is primed to take advantage of those perks.

One of the few emerging fighters under the age of 30 in the heavyweight division, the talented kickboxer picked up a unanimous decision victory over fellow newcomer Viktor Pesta in his promotional debut back in May.

He spent that camp preparing in Albuquerque, New Mexico alongside former UFC heavyweight champion Andrei Arlovksi and several other the other fighters from the Northern Caucasus that have made an impact in the UFC over the last few years as part of Team Jackson-Winkeljohn. This time around, however, Magomedov has relocated to San Jose to work with Javier Mendez and the American Kickboxing Academy team.

“When I just came to Greg Jackson's gym, I was very raw. Over there, guys showed me so many things – I improved my overall game so much being there. I became much better, a much more well-rounded fighter.

“I wanted to see different gyms (and) Khabib (Nurmagomedov) advised me to try to train at AKA,” Magomedov continued, explaining the reasons for the change in training camp locations. “He trained there and achieved great results.

“I love it there,” he added. “Javier (Mendez) paid a lot of attention to me from the day one and I'm very thankful to him for that. It is a great gym – a lot of top-level sparring partners and great coaching. It has everything to train with the best and to become the best yourself.”

Though Magomedov was victorious in his UFC debut, it was an uneven showing for the 27-year-old, who weathered an early knockdown to edge Pesta on the scorecards, showing sporadic flashes of the striking skills that had many keen on seeing him step into the Octagon for the first time.

“I was very nervous,” he admitted. “Frankly speaking, I didn't even notice the cage or anything around, I was so nervous. And I'm not pleased with my performance. Being knocked down in my very first fight in the UFC - this is not something I could be proud of, especially taking into consideration my plans here.”

Like everyone that arrives on the biggest stage in the sport, the talented heavyweight hopeful has his sights set on climbing the ladder and eventually having UFC President Dana White wrapping leather and gold around his waist in the center of the Octagon, but even though the path from “first appearance” to “fighting for the title” can be shorter at heavyweight, Magomedov isn’t interested in skipping steps or trying to find a fast lane to the top.

After briefly being linked to a bout with veteran Ben Rothwell earlier in the year, the Fight Nights Team member returns to action Saturday in Austin, Texas, where he’ll welcome newcomer Josh Copeland into the UFC cage. The 31-year-old Grudge Training Center product is the latest in a steady stream of fighters to claim championship gold under the Resurrection Fighting Alliance banner before getting the call to the UFC, joining the likes of Sergio Pettis, Zach Makovsky and Pedro Munhoz in following that path to the promotion.

Perfect through the first nine fights of his career, “Cuddly Bear” has earned seven finishes, and he enters the Octagon off his most impressive win to date, a first-round TKO win over the previously unbeaten Jan Jorgensen in July.

“He's explosive; fast hands, heavy right hand,” Magomedov offered, breaking down Copeland and what he expects to encounter when the two square off this weekend. “I heard that he has some good wrestling, but I never saw it in his fights.

“I think that he'll run towards me, will try to bull rush me, which would be good for me. I'm good at counter attacking and I have more experience standing up. But if I would see an opening, I would take him down and work from there. I feel very confident no matter where the fight goes.”

Should he emerge victorious this weekend in Austin, don’t expect Magomedov to start calling out established heavyweights or taking the Conor McGregor approach to climbing the ladder. He’s in this for the long haul and up for any challenge the organization sends his way.

“I don't pick fights. Whoever the UFC puts in front of me, I'll fight him. I don't want to rush things. I'll do it step by step, one opponent after another, but the end result would be the same.

“I must prove that I am the best. In order to do so, I'll have to beat everybody who's considered the best.”