Read on for results of the UFC 167 main event title fight between welterweight champion Georges St-Pierre and challenger Johny Hendricks... 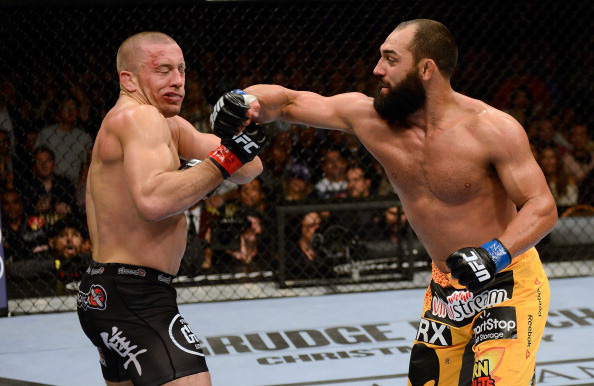 Johny Hendricks – a Div. I wrestling champion with one-punch finishing power – was billed as the most dangerous challenger to Georges St-Pierre’s title to date. He lived up to that billing, taking St-Pierre five grueling rounds, but in the end dropped a razor-close split decision. In retaining his belt, St-Pierre broke the UFC records for most wins and most championship wins, and solidified his spot at the top of several other UFC best lists.

St-Pierre signaled his mindset by entering the Octagon and doing cartwheels. The powerhouses each scored one takedown each in the first – St-Pierre’s coming inside the first fifteen seconds. From there, they locked horns in the center, forcing a restart. Hendricks had busier hands, defending one takedown against the fence with elbows from top, while St-Pierre fired off a few artful high kicks, none of which connected with any meaning. St-Pierre also walked into a Hendricks knee that looked like it could have cut his forehead.

Hendricks found his range in the second, coming forward and teeing off on the champion, who looked dazed at times. St-Pierre fired back his own straights when Hendricks would reset, but southpaw Hendricks poured it on and racked up damage. St-Pierre responded by tying up in the center and then on the fence. Eventually he seemed to recover, finding his range again and popping off jabs and leg kicks. Hendricks kept his hands low, though, clearing the path for a few right hands, body kicks and a high kick from “Rush.”

Roles were reversed in the third, with St-Pierre pressing the action and Hendricks countering. St-Pierre increased the output of his jab and leg kicks, but Hendricks also found the range with his jab. Hendricks seemed to save his energy for flurries, but St-Pierre’s impeccable cardio allowed him to avoid any big impacts. At one point, St-Pierre actually held Hendricks’ extended right hand to nullify his jab, and he also began throwing body-head combinations when Hendricks left himself exposed. As the round closed, Hendricks closed the distance and got a takedown.

Hendricks used shots from the clinch to topple St-Pierre to the ground in the first of their two championship rounds. St-Pierre worked to control Hendricks’ hands, but Hendricks drew blood with one big elbow from top. Hendricks then allowed St-Pierre to stand, and the two traded again in the center of the Octagon. The rest of the round was a struggle for position as the fighters grappled against the fence.

With the belt still potentially on the line going into the fifth, a motivated-looking St-Pierre liberally 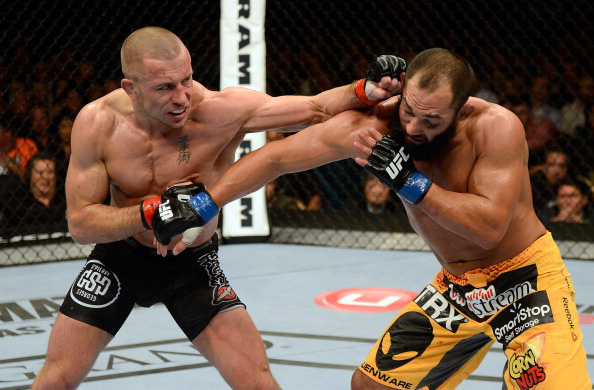 issued jabs, leg kicks and high kicks. St-Pierre grabbed hold of a single and used it to walk-drag Hendricks into the center of the mat, but Hendricks maintained his balance and got himself back against a wall. St-Pierre then dragged him back to the center, drawing a huge peal of laughter from the crowd. Eventually St-Pierre let it go, but followed up with a right hand and a takedown. The final minute featured yet another struggle for position against the fence punctuated by a St-Pierre takedown.

Both men celebrated at the horn, but it was St-Pierre (25-2) who was named the victor by the judges, who let him keep his belt with scores of 48-47 twice and 47-48 as the crowd voiced its displeasure. “He really messed me up,” said St-Pierre in the Octagon, who was noncommittal when asked whether he was retiring. “I need a vacation.”

“I thought I clearly won the fight,” said Hendricks (15-2), who immediately stated that he wanted  a rematch would return soon for the belt – the belt that he felt he had just earned.