When Anthony Johnson steps into the Octagon on Saturday night to face Jimi Manuwa at UFC 191, he knows he’ll be matched against one of the biggest punchers in the UFC.

That’s what makes their three-round light heavyweight bout at MGM Grand Garden Arena so enticing: They’re two fighters who are more concerned about landing punches than avoiding them.

“He’s a striker, I’m a striker,” Johnson said. “We’re both alpha males. We’re going to see who has the better striking.”

Johnson (19-4) is in rebound mode after losing the light heavyweight title to Daniel Cormier last May. He remains the division’s No. 1 contender, so a resounding victory over No. 7 Manuwa could springboard him back to another title shot.

Cormier defends his belt against Alexander Gustafsson at UFC 192 in Houston on Oct. 3.

“I’ll fight whoever,” he said Thursday at Ultimate Media Day at the MGM Grand. “I’ve said it before, I’ll fight as many times as I need to, just like Robbie Lawler did, to get back to the title. I’m not waiting on anybody. I just want to fight, and when my time comes, I’ll be ready.” 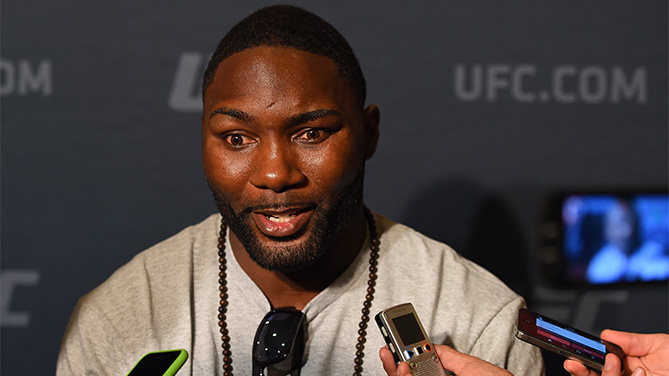 Manuwa is a difficult opponent, having won 15 of 16 MMA fights (4-1 in the UFC) with 13 knockouts. Johnson knows he can’t afford to look past Saturday.

“Jimi’s an awesome opponent and a worthy fighter,” he said. “I don’t take anything away from him. I thought I was a knockout artist and he has more knockouts than me.

“He definitely has my respect. I respect his ability, his athleticism and his hard work. I don’t take anything away from him.”

Johnson, who actually has as many KOs as Manuwa, said he’s prepared for a stand-up war, but he’s not worried about Manuwa’s ability to land big punches. It’s part of the job.

Johnson insisted he’s moved on from his recent Facebook controversy in which he ranted against a woman at his gym and then later apologized. But he still faced a barrage of questions from reporters Thursday.

“Yes, I was wrong for saying the things I said, but I’ve already apologized and everybody knows that,” he said. “I’m human and life goes on. If people want to still talk about it, go ahead.

“Do I regret it? No, but it’s a lesson learned and I am sorry. When I said what I said, I really felt bad. Nobody deserves to be talked about like that. But once again, I was mad and that was it. I apologized to her like a man and I admitted I was wrong like a man, and I kept living life, like a man.”

Johnson said he encountered the woman a few days later at the gym and they pushed past their differences.

“At the end of the day, both of us were wrong. I was just dumb enough to put it on social media.”