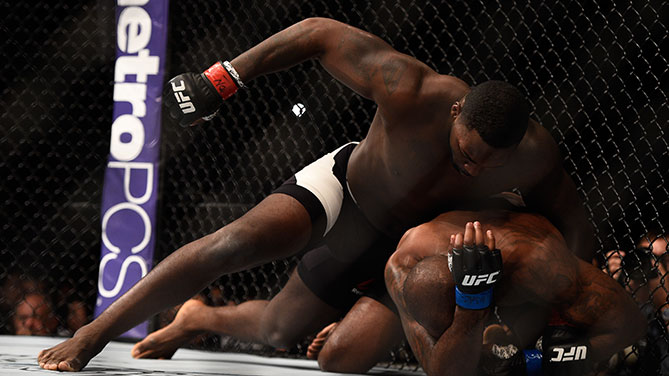 After falling short of winning the vacant UFC light heavyweight title in May, No. 1 contender Anthony “Rumble” Johnson put himself back in the race for the belt Saturday with a second round knockout of number seven-ranked Jimi Manuwa in UFC 191 main card action at the MGM Grand Garden Arena.

Johnson came out firing bombs at the start, briefly rocking Manuwa and putting him on the defensive. With the Brit now concerned about the striking of his foe, Johnson wound up taking him down with relative ease twice. The action stalled on the mat until the two rose with under two minutes left, but they soon locked up against the fence, Manuwa in control until the closing seconds, when Johnson led in the clinch.

The striking exchanges were sloppy as Round 2 opened, but Johnson finally connected, putting Manuwa on the deck with a right hand. Two follow-up shots ended the bout, referee Jason Herzog intervening 28 seconds into the frame.

“That’s just muscle memory,” Johnson said of the finish. “We don’t really train that. I guess it’s in my DNA.”