The Rude Boy of Muay Thai 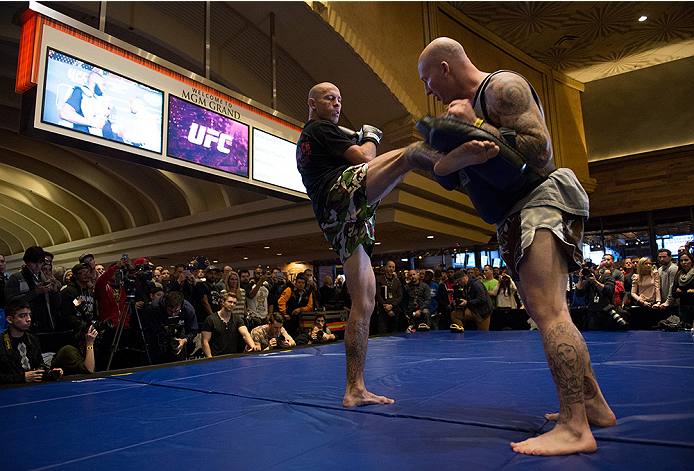 You know who “Cowboy” is. It’s about time you learn who “Rude Boy” is.

Former undefeated kickboxer Donald Cerrone, who owned a perfect 7-0 pro MMA record at the time he burst onto the WEC lightweight scene in 2007, became an immediate fan favorite with his aggressive stand-up and his penchant for finishes.

Yet what has really been astounding, even for Cowboy’s biggest bandwagon riders, has been Cerrone’s last 15 months of UFC action, which includes a seven-fight win streak, four finishes, four bonuses and, most recently, two wins over two top 10 opponents that came over the course of 15 days.

It’s the stuff of legends. And that stuff that is putting the 155-pound division on blast is the work of a three-headed monster team consisting of Cerrone, wrestling coach Jafari Vanier and striking coach Henry Smith.

“We always say, we’re getting the band back together - that BMF ranch crew,” Smith said. “It’s Cowboy, it’s Jafari and it’s me. One, I’ll never take credit 100% for anything. It’s a team that builds a fighter. The only thing I did differently with D is that I got him back to his roots. He seemed to me, the last year before I came back, he got too away from what he was great at. He got too caught up into MMA. He got away from his Thai boxing. He got away from his knees and his kicking game.”

The 41-year-old Baltimore native’s coaching resume dates back to the late 90s, with a litany of fighters ranging from boxing to Muay Thai to MMA being under his wing. The majority of these fighters, like multiple-time WKA and IKF Muay Thai champion Jesse Swain, have been from one of Smith’s two stables, either Baltimore’s Ground Control gym, in which Smith was their first head striking coach, or Towson Thai Boxe, which Smith owned and operated until recently.

Prior to Cowboy’s current streak, Cerrone and Smith had a brief working relationship that only existed for a couple of fights at the end of Cerrone’s run in WEC, including the rematch with then-WEC lightweight champ Benson Henderson, but Cowboy and Smith remained in touch as friends throughout the years. Finally, the pair reconnected as coach and fighter two weeks before Cerrone’s bout with Rafael dos Anjos. The losing outcome would be Cerrone’s last since Smith has become a full-time camp fixture.

“I went out to Albuquerque and I had a full camp with him and that’s when I saw the difference in D,” Smith said. “That’s when I saw how he’s matured and grown as a fighter and his mind was open. He was like, ‘I’m ready to put the time in and put the work in and show everybody I’m one of the best fighters in the world, hands down.’ And it’s been seven in a row since.”

Smith will be the first to say it’s not simply that Cerrone is in the right headspace to listen and work with him on striking, but it’s the tandem effort that Cowboy is putting in with Vanier as well. While every fight starts out on the feet and it’s Smith’s job to keep Cerrone as offense-oriented and dangerous there, it’s former Augsburg College wrestling standout Vanier who is in charge of keeping Cerrone upright and keeping these scraps where Cowboy wants them - at the end of a crushing knee.

“What gives a great striker that confidence to pull the trigger? His wrestling,” Smith said. “D’s wrestling and the progression of his wrestling has made my job as a Thai boxing coach a 1000 times easier. Now, he’s able to have confidence in his striking. He can let his knees, his kicks, and his punching go because he knows his takedown defense is on point. That is 100% Jafari Vanier. There are some great wrestling coaches in MMA. I have seen some insane wrestling coaches and Jafari is hands down that next level.”

Helping guide an elite talent like Cerrone toward realizing his dream of UFC gold is a far cry from the two-car garage in Detroit where Smith was first exposed to Muay Thai. Smith has fighting in his blood, as his father and grandfather both boxed and turned Smith on to the sport at nine years old. In high school, his family moved to Detroit. Smith found solace and friends by training and sparring at Emanuel Steward’s famed Kronk Gym. A year later, Smith befriended two Thai guys who worked at a local Thai restaurant and they would open his eyes to how painful a shin to the leg can be.

“In this two-car garage, they had a pole wrapped with a mattress as a heavy bag,” said Smith. “They showed us low kicks and basically the fundamentals of kicking and what not. I was strictly western boxing at the time and I thought I was the man. I was cocky training with all these good boxers. I was like, ‘That kick ain’t going to bother me.’ He started ripping these low kicks on my leg, just murdering my leg. My knee swelled up and I was like, ‘I need to know what that is about!’ That is lethal! Two weeks later, my friend and I went back and asked them to teach it to us.”

A couple years later, using their de facto coaches’ connections, Smith and his friend struck out on an adventure and spent the summer in Koh Samui, Thailand, training Thai boxing with the best while being called “farang” or foreigner. The boxing and Thai boxing experience wouldn’t become a factor in Smith’s life until several years later, when Renzo Gracie BJJ black belt and Ground Control owner John Rallo would ask Smith to help him work his stand-up in preparation for MMA.

“I started messing with a couple guys and just teaching them the fundamentals that I had learned,” Smith said. “It was a blessing that what I had learned, I had learned the Thai way from Thais. All these basic fundamentals were clean and simple. I didn’t know a lot, but I taught them basic low kicks, basic sweeps, elbows, knees, basic stuff. More and more guys were liking it and then there were guys who weren’t there to fight, but just wanted to learn about Thai boxing and wanted to train with me.”

Quickly, Smith felt how rewarding coaching could be and saw he had a knack for it. Throughout the early to mid 2000’s, Smith would train fighters as well as travel to other gyms learning how they coach fighters like at Ultimate Muay Thai and Coban in New York City to working with one of the all-time best in Noom Chaiyasen, aka Jongsanan, at Fairtex in San Francisco. Smith developed his signature “Rude Boy” style, which was using the movement, angles and punching from western boxing mixed with the powerful kicks, knees and elbows of Muay Thai.

“To me, it’s a western style of Thai boxing,” Smith said. “It’s us westerners using our movement and adding to Thai boxing. I started training guys and giving them better movement and angles and working on their hands. A little bit more pressure, more aggressive, but with movement. Not worried about counter-fighting as much. Counter-fighting is a style, but the thing that was always told to me was that once you get someone backing up there’s nothing behind them besides an ass whooping.”

Eventually, this path led Smith to the fateful chance encounter with Cowboy in 2009, which led to a workout session that would set the framework for their current success. Smith was coaching at an event in Virginia, which Cerrone was attending with his then-manager Bryan Hamper, who had been training with Smith. Hamper introduced the two and Cerrone was curious about Smith’s coaching expertise and Smith was interested in working with a former undefeated kickboxer he was a fan of. The next day, Cowboy and Rude Boy discovered they had an instant connection.

“Here we are in the gym and we start freestyling and we rip pads for like a half hour,” Smith said. “Non-stop. Just moving. The whole gym was watching. Everyone was saying it looked like we had been training together for years. Me and him both said that we just had energy. Coaching is all about styles and gelling with a fighter. It’s about finding a rhythm. My style of pad holding has always been very fluid. Punching and kicking and following with a knee, following with a high kick, and always keeping that pressure, that forward momentum. And that’s always been a style that Cowboy has liked.”

Whether it was the picture perfect KO of Jim Miller last July or earning his first win over Henderson on less than two weeks’ notice in January, UFC fans are seeing the best Cerrone they have ever gotten to see and it’s thanks to that BMF ranch crew of Cowboy, Vanier and Smith.