"I am very excited and honored to be fighting in the UFC. It's a dream come true, and it's huge. I never thought I would see the
UFC in Singapore this soon and the reaction has been great." - Royston Wee 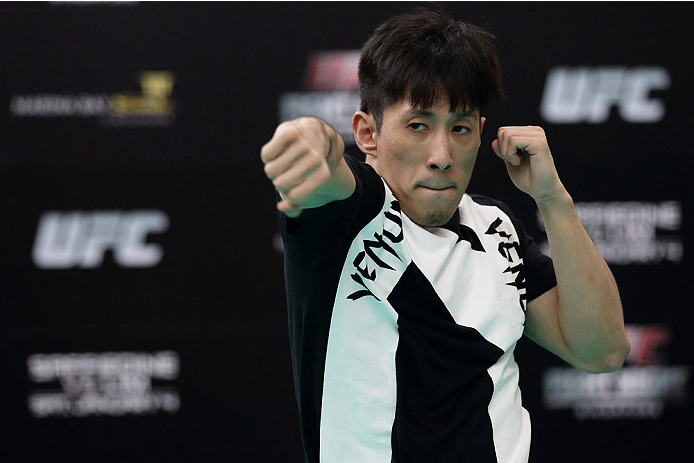 Royston Wee knows what you’re thinking. How can this 27-year-old bantamweight possibly be ready for the UFC after just two pro fights? He’s fine with that, and he plans on providing an answer to that question when he debuts on Saturday against fellow newcomer Dave Galera.

“It's a huge step up,” admits the 2-0 Wee. “I know people will question whether I am ready after just two fights, but come watch on January 4th and I hope to show that I am. We have a strong and close team around me at Impact MMA and this gives me a lot of mental fortitude. We also have an excellent sports psychologist, Edgar Tham, helping my team and who is giving us strategies to keep my mind sharp and focused.”

If anything, Wee has shown to have the poise and focus necessary to compete at this level, and not just because he’s finished both of his fights by submission in the first round, but because when he fights this weekend in Singapore, he will be the first Singaporean to compete in the UFC. Needless to say, that carries its own set of pressures with it, but he’s been dealing with it like an old pro.

“I am very excited and honored to be fighting in the UFC,” he said. “It's a dream come true, and it's huge. I never thought I would see the UFC in Singapore this soon and the reaction has been great. I have had people coming to support me from all over. It's a great feeling to see all the support I am getting and how Singaporeans have rallied around me and my team.”

Just five years into his training as a mixed martial artist, which began after he saw The Ultimate Fighter, Wee has been a quick study in the sport, making him a likely choice to be a part of the UFC’s first ever show in Singapore, but as he points out, he may be the first, but he won’t be the last.

“It (the MMA scene in Singapore) is still developing, but it has come a long way from when I first started in martial arts five years ago,” he said. “Hopefully, with the UFC in town and a Singaporean UFC fighter on the cards, the scene will expand even further. There are some very exciting fighters coming through the ranks as well.”

“For me, it's an honor to be able to lead the pack of Singapore MMA fighters,” he adds. “I don't see myself as a role model yet, not until I've proved myself in the Octagon.”

That process starts on Saturday against the Philippines’ Galera, a 5-0 pro who has also finished each of his wins.

“Dave is very tall for a bantamweight (5-foot-11) and he is very adept at submissions on the ground,” said Wee of his foe. “So my coaches have adapted my training to cater to these attributes. We have a fantastic BJJ coach at Impact MMA, Professor Leke, to help me with my ground game and we've also got taller training partners both from my gym and even other gyms to come help me prepare.”

As for his own fighting style, Wee describes himself as “a generalist.”

“I like to mix it up - standing, on the ground, everything. My game is still developing and I hope to bring something new to the Octagon for every fight.”

He’ll need that versatility in the 135-pound shark tank, where each bout is a battle that will test anyone mentally and physically. For most people, that would be a task to be avoided at all costs; for fighters like Wee, that’s why they get up in the morning.

“UFC is far and away the top organization in the world with far and away the best fighters,” he said. “I know I am probably the least experienced of the whole roster, so it's going to be a long and exciting climb for me.”

And it all starts on Saturday.

“2013 has been life changing,” said Wee. “However, my team and I see it as the beginning of a new and exciting journey. First and foremost, we want to do well on January 4th. I plan on gaining experience, getting better and stronger, and I want to get more fights in the UFC in 2014.”