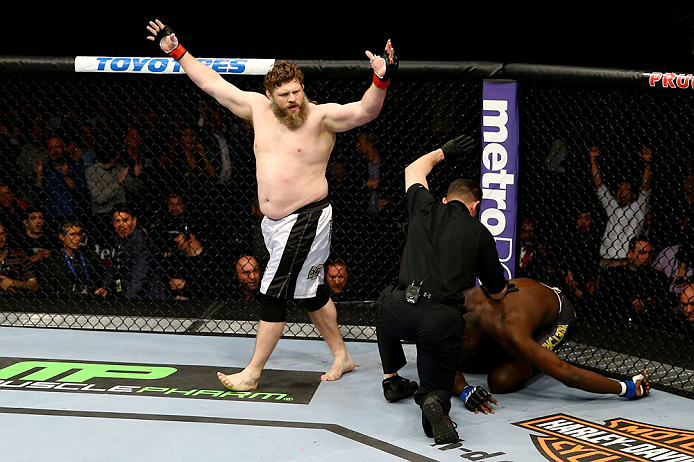 The paydays are better, the spotlight is brighter, and he now has a wife and child to support, but Roy Nelson really hasn’t changed much, if at all, since he was fighting twice in one night back in Redding, California for a 2004 event called Rage on the River that kicked off his pro mixed martial arts career.

“My mindset was ‘let me see if I even like this, and we’re gonna go ahead and try this out,’”  said Nelson, who submitted Bo Cantrell and then won a split decision over Jerry Vrbanovic on April 17, 2004. “At the same time, I was mad at UFC fighters that I was helping out, so I just figured it was a way to get back at them.”

At the end of the night, Nelson surmised that “there was definitely some potential there,” but also told himself that one night tournaments were out unless they were held in Japan’s PRIDE organization. Having the possibility to compete internationally was enticing to the young “Big Country,” but after winning his third bout in August of 2004, he had enough trouble finding anyone to fight, let alone someone overseas.

“Nobody wanted to fight me,” said Nelson of the early days, where he was inactive from August of 2004 until April of 2006. “I couldn’t get a fight if my life depended on it. I started using my real name, Roy Nelson, and they’d say ‘yeah, I’ll fight him,’ and then they call back a week later and go ‘is that Big Country?’ Yeah. “No.” I couldn’t find a fight for two years.”

Fast forward to 2013, and Nelson, who went on to establish himself in the IFL before winning The Ultimate Fighter 10 and picking up a UFC contract, is in high demand, so much so that when a series of injuries hit Saturday’s UFC 161 main card, he got the call to step in for a co-main event bout against Stipe Miocic.

“The way I looked at this was, they needed to sell out UFC 161, so they put Roy on it and then it sold out,” said Nelson.

And yes, UFC 161 in Winnipeg is sold out. Whether that’s an indication of Nelson’s drawing power or not could be open to debate, but what isn’t up for conjecture is the fact that there are few, if any, heavyweights riding a hot streak like he is.

Since a UFC 143 Fight of the Night loss to Fabricio Werdum, Nelson has scored consecutive first round knockouts of Dave Herman, Matt Mitrione, and Cheick Kongo making it six wins in the Octagon with all six coming by way of knockout. And while the Miocic fight comes on the heels of an April 27 win over Kongo, Nelson isn’t bothered by the short notice.

“If I could fight six times a year, that would be great,” he said. “I just like a schedule. I don’t like the call out of the blue. I prefer a schedule. That’s why I liked the IFL.”

In the now defunct IFL, Nelson fought five times in the 2007 calendar year, with a BodogFight bout thrown in to make it an even six. It sounds like a horrific schedule for your body to endure, but Nelson disagrees.

“Training is what’s physically abusing to your body,” he said. “But the thing is that if you’re training all the time, it’s an even keel. Usually what happens when you get these phone calls two weeks before the fight though, you go ‘I’ve got to get this training in,’ and you try to overdo it and that’s when you get hurt. But when you can plan ahead and put these goals out there, you can definitely get better throughout the year, just like a regular season in the NFL or in basketball. You start off slow and kind of work your way up until you get to where you need to be. I could fight every other weekend if I knew if I was fighting every other weekend.”

So if anyone expects Nelson to be stale timing-wise or his cardio to be less than 15 minutes ready, that won’t be the case. And as far as Miocic goes, he won’t be sneaking up on the 36-year-old Las Vegan either.

“Anybody in the heavyweight division in the UFC I keep my eye on, and anybody in the UFC is dangerous,” said Nelson, and no more than the right hand wielding “Big Country,” who could make a serious case for title contention with another knockout win. Does he at least feel like he’s getting closer to championship gold?

“Throughout my whole fight career everybody’s dangled that carrot so I haven’t got there yet,” he said. “It’s still dangling.”

“The string’s getting shorter but the carrot’s still out there.”

And that’s why he keeps fighting.