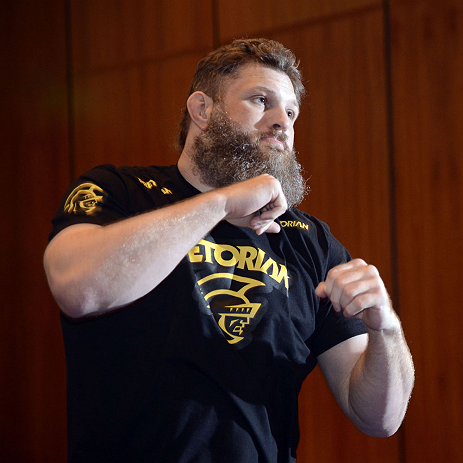 Heavyweight contender Roy Nelson has a Brazilian Jiu-Jitsu black belt under Renzo Gracie to his name, but you would be hard pressed to find any evidence of that by looking through the positive side of his body of work in the UFC: four wins, four knockouts.

Even in his losses to Junior dos Santos, Frank Mir, and Fabricio Werdum, the ground game was a second, maybe even third thought for “Big Country,” who makes no excuses about his desire to stand and finish.

“It’s like the home run ball when you’re watching baseball,” explains Nelson. “Everybody loves the longball and everybody loves a knockout. The thing about it is, with the heavyweights, the casual UFC fan doesn’t like the ground as much, and the UFC is definitely a popularity sport, so it definitely helps to be a popular person. The only time you’re allowed to be the guy that just wins is once you have the belt, because once you have the belt, everybody loves just a straight-up winner.”

Logic like that is hard to argue with, and at the moment, no one is complaining when it comes to a Nelson fight. Whether he’s knocking out guys like Dave Herman, Mirko Cro Cop, Stefan Struve, or Brendan Schaub, or showing off a granite chin that is starting to take on mythical proportions against the aforementioned trio that has defeated him in the Octagon, Nelson has kept it interesting for fight fans, even if his expected bout tonight with his opposing coach on The Ultimate Fighter 16, Shane Carwin, was scrapped due to injury, hoisting another banger – Matt Mitrione – into the main event slot.

“We had bets if Shane was gonna pull out,” said the always frank Nelson. “And I definitely did win the bet.”

The switch did force Nelson to make some game planning adjustments, as Carwin and Mitrione are different fighters stylistically, but beyond the sometimes incendiary quotes, and the trio of belly, beard, and mullet, lies a fighter who seemingly enjoys the puzzle of mixed martial arts the best. And it’s this aspect that has kept him relevant in the game.

“I think the biggest thing with a lot of my peers is the evolution,” said Nelson, an eight year pro. “I think with every fight I get better, while most fighters will get stagnant. A loss will make you better; sometimes a win will make you actually go backwards, depending on how you won. It all depends on how you look at things. My last win against Herman I threw three punches, but then right after I’m like ‘man, I trained my ass off for that.’ But with 20/20 hindsight, you go, that’s the reason you train, to go in there and do what you’re supposed to. Then you only have to throw three punches and then go ‘that was easy.’”

The 51 second knockout win over Herman at UFC 146 in May earned him his third Knockout of the Night award, but more importantly it kept him from going into a 1-4 funk, something that isn’t good for anybody, let alone a 36-year-old fighter. And while he joked on a recent video blog that he was old, even reiterating the statement when it was brought to his attention by saying “I think after the age of 25, it’s all downhill as an athlete,” he still feels he’s got plenty left to offer the sport.

“I think I can do this until I’m probably about 41, 42 and be competitive,” said Nelson, whose goals are simple from here on out.

“I just want to make sure I fight the best in the world,” he said. “I’d like to rematch Junior (dos Santos) or fight whoever has the belt, but I think Junior will have the belt at the end of December. I’d also like to make sure my kid has a retirement (fund). Just things like that, and being more business savvy versus just being more ego driven where it’s like I just wanna fight.”

As a new father, these are the things that will occupy your mind and your days, but despite the added responsibilities, Nelson remains true to his initial philosophy about the actual fighting part of the sport.

“One thing I’ve always been really good at is surrounding myself with people who either know just as much as me or more than me,” he said. “It’s always about being a student of the game. I don’t care if you’re a guy that just started, but if there’s something that I see that’s way different that’s working, I’m gonna ask. It’s like Bruce Lee, take what works and throw the stuff out that doesn’t.”

Tonight, he’ll see what works against Matt Mitrione, a former teammate on season 10 of The Ultimate Fighter, that he says, “wasn’t even on my radar, but now he’s on my radar because he picked a fight. If you’re gonna ask for a fight, I’m more than willing to take the challenge.”

“You never want to poke the bear,” said Nelson. “You might get bit.”