"Since I got into the UFC, I want to make sure I am champion before I leave." - Roy Nelson 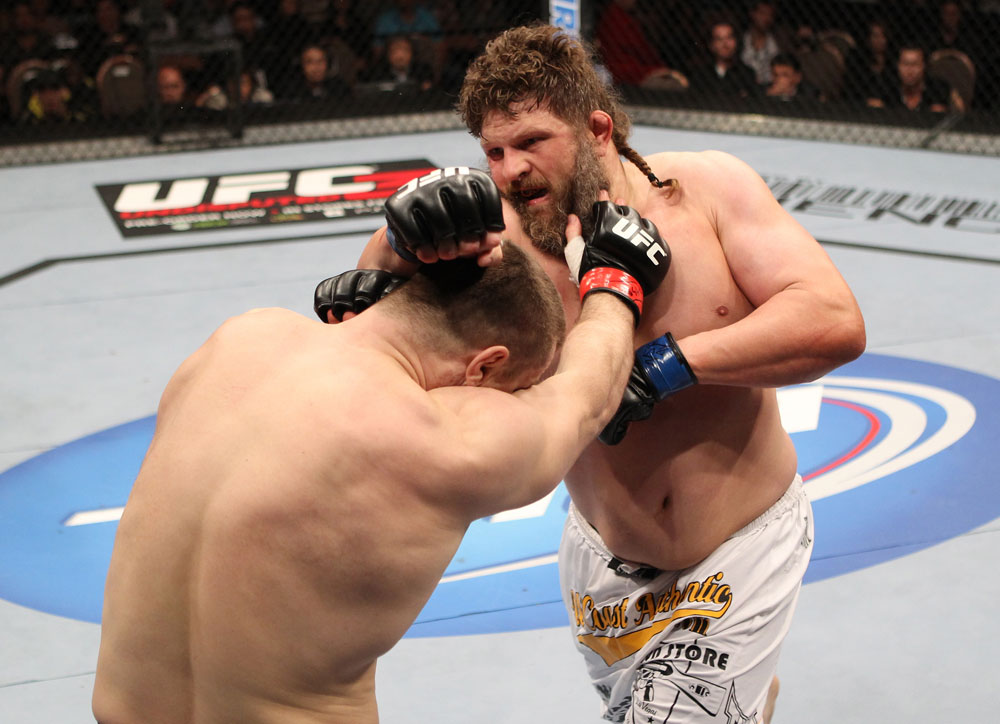 For people who enjoy collision competition, nothing will beat this upcoming first Saturday and Sunday in February. On Sunday, it’s the final NFL game of the season: Super Bowl XLVI between the New York Giants and the New England Patriots. But the night prior, at the Mandalay Bay Events Center in Las Vegas, Nevada, UFC 143 will be the proving ground for two of the top heavyweights in the world: Fabricio Werdum and Roy Nelson. Before the nation crowns a new Super Bowl champion, the big boys of the UFC will clash to see who is one step closer to a title shot. For “Big Country”, nothing could be sweeter than another win in his hometown, which puts him that much closer to UFC gold.

“I feel like I can beat anyone that is in the heavyweight division,” declares Nelson. “That's just what I feel. I feel if I fought you before, I got your game, I got it locked. I'm like Robocop or the Terminator, where I learn to be a better fighter. When it comes to the game of MMA, you want to fight whoever it takes to get to the top.”

At 35 years old, the Las Vegas native is entering his eighth year as a pro and his sixth fight inside the Octagon, and the 17-6 Nelson’s attitude is as intensely focused on his ultimate goal as it ever was: being the UFC heavyweight champion. Less than two years ago, Nelson was nearly one win away from fighting for the strap at UFC 117 against Junior Dos Santos. A win over Werdum coupled with Nelson’s win over the iconic Mirko Cro Cop at UFC 137 would immediately put Nelson back in the mix for hopefully a title eliminator match in 2012, which is exactly where he has his sights set.

“Ever since I started fighting, I've just always wanted to fight the best in the world,” tells Nelson. “Move up the rankings and fight the best in the world. I think that's pretty much always my goal. You only retire when you can't compete with the best in the world still. Look at Dan Henderson. Judging by the landscape of the heavyweight division, I could do this until I’m 50. My thing is when I was in the IFL I made sure I was champion. Since I got into the UFC, I want to make sure I am champion before I leave.”

Standing in Nelson’s way is a familiar face to the UFC faithful, Brazilian submission specialist Werdum. After going 2-2 inside the Octagon, the PRIDE veteran joined Strikeforce in 2009, where Werdum’s stock rose like a rocket. Arguably, no other fighter has had a more legend-growing and captivating year in MMA outside of the UFC than Werdum had in Strikeforce. Werdum went 3-0 with a quick finish of Mike Kyle, a decision win over Antonio “Bigfoot” Silva, and, the coup of coups, a submission of Fedor Emelianenko via triangle choke in the first round on June 26th, 2010. Nelson wants to face and defeat the best, and Werdum is certainly one of them.

“Fabricio is a great fighter,” affirms Nelson. “He was the guy that dethroned Fedor. He's definitely beaten up some great guys in the UFC too. He's someone you can't take lightly. He's like #4 in the world right now. He's definitely somebody.”

The 14-5-1 Werdum’s most recent fight was last June, a decision loss against current #1 contender Alistair Overeem. It definitely wasn’t the most entertaining heavyweight main event, but, in that loss, it clearly showed how dangerous a fighter like Overeem knows Werdum is. Overeem refused to go to the ground with Werdum and some believe, including Nelson, that Werdum outstruck Overeem, who is a former K-1 kickboxing World Grand Prix champion. Either way, it’s a loss on his record, but for those who have seen the fight it was another eye-opening experience about Werdum.

“I saw the fight with Overeem and Overeem was very tentative because Fabricio is a guy who can beat you in a lot of spots,” says Nelson. “Fabricio had already beaten Overeem, so it's not like he wasn't cautious because of that. The biggest thing with Fabricio is he is a well-rounded martial artist. He actually beat Overeem on the standup. You have to be definitely cautious with his ground game because of what he's done to Fedor and what he's done to a lot of fighters in the UFC. I've prepared myself to be the most well-rounded mixed martial artist.”

Nelson is busy sharpening his own vaunted all-around skills at his gym The Country Club in Las Vegas. He matches up perfectly with Werdum in all areas of a fight, including and especially the ground game, where he is a fellow BJJ black belt, having received the honor from the revered Renzo Gracie. But he isn’t entering the cage to test Werdum’s “jits”; Nelson is going in there to win. “Fabricio attacks with armbars and triangles because he has long limbs. I'm more the American-type with power and technique and I try to keep it simple on top. If I wanted to find out what it was like grappling wise with him, I would just go to his gym and grapple him, but this is MMA and I'm trying to be the best MMA fighter.”

As far as striking, Nelson gives Werdum a ton of praise, but one thing his opponent lacks is his specialty: power.

“Fabricio might have better standup than me and his standup might even be better than the K-1 champion Overeem's, but Overeem and I definitely punch harder,” affirms Nelson, whose heavy hands KOed Brendan Schaub to win him season 10 of The Ultimate Fighter as well as earned him 10 of his 17 professional victories. “Going off of what he did to Overeem, he beat a K-1 kickboxing champion in the standup, but Overeem just punches harder. The contrast Overeem and I have is that we punch harder. Sometimes God just blesses you with power.”

On February 4th in Las Vegas, two titans will tangle in the Octagon to decide who is that much closer to the glory of being in a heavyweight title fight.

“It is definitely one of those things you want to have on your resume,” muses Nelson, who won’t be satisfied in the UFC until he gets his shot at the gold and wins it, and that starts Saturday night with Werdum. “If you play football, you want to say you went to the Super Bowl and the next thing is to say you won the Super Bowl. Everyone has goals and you just have to make sure you accomplish them. Expectation wise for this fight, it's just to go out there and win and put on a show, so that the fans will appreciate it.”