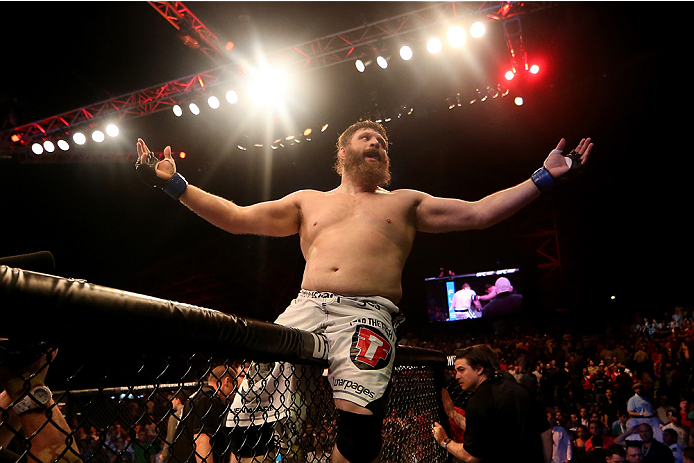 Roy Nelson never minces words when discussing his sport, his career, or anything for that matter. It’s a trait that has endeared him to the UFC fanbase, but what they really enjoy about “Big Country” is that when it’s fight night, he’s there to fight.

“The one thing I do know is that I know who pays the bills – it’s the fans,” Nelson said, and win or lose, he’s done his best to keep them happy. So when he lost his most recent bout to Mark Hunt last September, it wasn’t cause for him to question where he stood in the great scheme of things after going 1-3 in his last four bouts.

“I know what my pedigree is in the sport,” he said. “I’ve been there, done that, fought the best guys in the world and I love doing that. And if I didn’t think I was competitive, then I wouldn’t be doing this.”

That’s why he’s still here. And you can also throw in the fact that he knows that the fans will always tune in when he fights, because when the bell rings, he’s one punch away from glory once more.

“The one thing about the heavyweight division and the top 15 is that you’re pretty much two fights away,” he said. “Travis Browne fought Brendan Schaub, and I think Brendan was number 15. Travis was number three or two, and if Schaub would have won that fight, his next fight might have been for the belt. And that’s one fight. That’s one thing about our division. We’re so close in the top 15, if you have a good day at the office, you can change a lot of things. Our division can change with one punch.”

It worked for Hunt, who parlayed his win over Nelson into a late-notice crack at the interim UFC heavyweight title against Fabricio Werdum last November. As soon as that fight was announced, the Las Vegan was on the phone to UFC matchmaker Joe Silva, asking for the loser of that bout.

“I want a rematch with all the people I lost to,” Nelson, who has lost to Hunt and Werdum, said. “But with the fight with Mark, it wasn’t a match I was losing. I just got caught.”

Silva told him that Werdum was a possibility if he lost, but that it was too soon for a rematch with Hunt. Nelson believes that it’s always a good time for a Hunt-Nelson bout, and he’s not alone.

“Anybody that watches Mark, Mark fights,” he said. “Anybody that watches me, I fight. And I think that’s the beauty of watching the women fight now. It’s like watching the early version of the UFC and the old PRIDE days; people just came out and fought. Now, the guys are getting a little bit smarter, and they’re like ‘okay, I get paid to win, so I need to make more money.’ The women are just like ‘dude, I just want to be here; I just want to fight.’”

Nelson just wants to fight too, and he’ll get his chance to get back to work on Saturday when he faces Alistair Overeem. It’s a marquee matchup on a card filled with them, and the general consensus is that in this heavyweight bout, someone isn’t going to be hearing the final bell.

And though Nelson took to the podium before the official UFC 182 post-fight press conference took place in January to make his case for a fight, he didn’t expect to get one the next day, prompting him to pick up his wife and son and keep his original plan of going to Florida to help some friends out at the American Top Team gym intact.

“Bigfoot (Silva) had a fight, Mo Lawal had a fight,” he said. “And instead of having the lead time for a fight, I went in looking for a fight and then I literally had a fight the next day. If I had more lead time, then I’d probably just do a camp here (in Las Vegas). But I already knew there were heavyweights and big guys (in Florida), and my plan was that I was already going to Florida anyway to help with Mo, so I ended up staying out there a little bit longer.”

The news came as a surprise to fans, as Nelson is known for being someone who likes the comforts of home while preparing for a fight, but while his decision to spend some time in south Florida shows what kind of friend he is, he also got in some good work at ATT.

“I’ve been doing this for 14, 15 years, so it wasn’t anything I hadn’t seen before,” he said. “It was just different. And I brought a little home with me, but it’s different living in a hotel for a couple weeks with no kitchenette and always eating out. The biggest thing, comfort-zone wise, is not really having control of ‘okay, we’re gonna do this or we’re gonna do that.’ You’re more like ‘okay, what’s tomorrow gonna bring?’”

For the 38-year-old Nelson, tomorrow will bring media obligations, the next day will be weigh-ins, and on Saturday, he fights. It’s a routine he can play over and over in his head, but the beauty of what he does is that on fight night, nothing is ever routine.

“That’s why everybody loves the heavyweight division, because you have to watch,” he said. “I’m just adding drama back into the sport.”