When you’ve been in the fight game for over 15 years and are closing in on 50 career fights, there is a very good chance you’re going to have crossed paths with the same opponent once or twice along the way, but as fitting as her nickname “The Happy Warrior” is — and it’s truly perfect — Roxanne Modafferi might have to consider and additional moniker as she readies to return to battle this weekend in Las Vegas: Roxy Rematch.

“I know, I was thinking about that, like, ‘Man — I’ve got to rematch somebody again?’” Modafferi said about facing Andrea Lee, who she beat when the two competed under the Invicta FC banner several years ago, for a second time on Saturday night in Las Vegas.

Asked if she was aware just how many rematches and trilogy fights she’s been a part of, the engaging veteran tried to see if she could recite them all from memory.

“There is probably a sixth one I’m forgetting,” she said before quickly remembering. “Jen Howe!”

In addition to the six she correctly identified, there were also twin bouts against Vanessa Porto and Barb Honchak, plus a pair of meetings with Sijara Eubanks — one in the semifinals on Season 26 of The Ultimate Fighter, and another at UFC 230 — bringing the total to nine.

“Wow — nine,” said Modafferi, who sports a 9-9 record in those seven two-fight series and two three-fight sets and admitted that fighting the same opponent multiple times can be frustrating.

“I want a challenge and I want something new; I don’t want to be bored and fighting the same person over and over, so I’m happy that I’m fighting her (Lee) after a while. It’s going to be like a new fight, I think.”

It likely will be, given how much has changed since that first meeting, which took place on December 5, 2014 and saw Modafferi come away with a split decision victory. 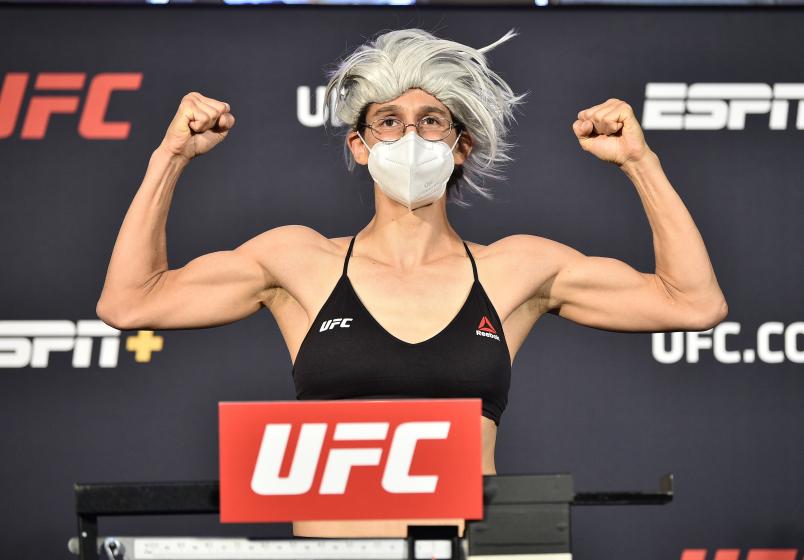 Both women have grown and developed considerably, with Modafferi continuing to hone her craft and build a tremendous relationship with John Wood and the Syndicate MMA crew in Las Vegas, while Lee has gone from a 2-0 mixed martial arts neophyte to a fighter with an 11-4 record and a place two spots behind Modafferi in the flyweight rankings.

Whenever two fighters are matched together for a second time, one enters hopeful that the results remain the same, while the other is hoping to gain a measure of revenge, and while everyone knows that past results have little influence on future outcomes, we can’t help but get hung up on thinking about how the previous meeting played out and what that means for the fight ahead.

But heading into her second showdown with Lee, Modafferi is doing her best to clear her mind and focus solely on the task before her on Saturday night, as this fight seems to be carrying a little more significance for the seasoned veteran.

“I guess since I beat her the last time, now she has a chance to come back and she’s gotten better,” she said, articulating one of the core narratives surrounding her fight. “I don’t know what’s going to happen, but it’s going to be me with my hand raised.

It’s strange hearing someone who is usually brimming with positivity sound even slightly down, like there has been something gnawing at them for some time that they haven’t been able to resolve, and that’s how Modafferi sounded as she explained this.

Given the opportunity to elaborate, she declined, but said, “I’ve had some hard camps lately and I’m just trying to figure out my balance. I’ve been getting challenged in certain ways and I can’t wait to get out there and get the win.”

With balance being one of the core tenets of martial arts training — and Modafferi being a martial artist first and foremost — it only seemed right to explore the concept and how it pertains to her performance in the cage further.

“I’m not really sure, actually,” said Modafferi when asked how differently she feels inside the cage when dealing with the kind of imbalance that she is currently dealing with as she readies to return to action. “I’ve been thinking about that a lot.

“I think I do a good job of being a good Jedi and being emotionless in the fight,” she continued, offering a reference that few others in the fight game would make. “That’s a big deal to me because Jedis say there are no emotions — there is only peace — and I feel like I’m able to expel my emotions when I go out there. I don’t feel anything when I’m trying to punch her or armbar her or elbow her. No anger, no excitement; just fighting.

“Being out of balance in fight camp kind of sucks,” she added with a chuckle, “so I’m just trying to figure it all out.”

Over the course of a career that has spanned nearly two decades, Modafferi has endured ups and downs, highs and lows, and somehow always managed to continue pressing forward, searching for new ways to improve as a martial artist, a fighter, and as a person.

She has been a perpetual ray of sunshine and happiness in a business that can turn people hard and bitter, so to hear those tired, telling sighs and twinges of frustration in her voice tells you how much getting back on track on Saturday night means to “Roxy Rematch” on every level.

“I really need the win for myself, as a person,” she said, the excitement returning to her voice. “I’ve prepared better for this fight than I did for my last fight and I’m excited to go out there and show my skills, get the win.”