Roxanne Modafferi is back to being her ebullient self ahead of her bout with Viviane Araujo on Wednesday evening.

It was evident the second she picked up the phone and made crystal clear when the avid cosplay enthusiast filmed a brief Mortal Kombat-inspired clip of her as the character Kitana as she departed her condominium complex in Las Vegas to embark on her journey to “Fight Island.”

“I have found my balance in training and I’m really, really happy,” said the 38-year-old veteran, confirming her return to being “The Happy Warrior” and having successfully navigated the numerous challenges that dragged her down ahead of her September engagement with Andrea Lee.

“I had an injury that I was getting over and then one of my coaches left, so I was trying to find different coaching balances,” continued Modafferi, explaining the issues that contributed to her “not as joyous as usual” nature prior to her second meeting with Lee in September, which she won by unanimous decision. “Now I’ve finally found that and things in my fight camp have come together very nicely now.”

A far away island for a martial arts battle!! @ViviAraujoMMA are you ready to TEST YOUR MIGHT? #FinishHer #MortalKombat #Kitana Video edited by Chris Roman (I do not own music rights) @ufc @espnmma #ufc pic.twitter.com/7jNZqM2G2m

In case anyone needed further evidence that athletes continue to grow and learn things about themselves late in their careers, Modafferi remains a beacon of insight.

Not only has she transformed from a grappling specialist into a more well-rounded fighter in the second half of her now 18-year, 43-fight career since joining forces with John Wood and the team at Syndicate MMA in Las Vegas, but the coaching challenges that troubled her ahead of her third and final appearance of 2020 proved illuminating, as well.

“In Japan, I didn’t feel like I had a main coach, so I’ve been through the periods where I really didn’t have that support, and so I feel like I should be able to push through anything at this point,” began Modafferi, who had already completed one stint on The Ultimate Fighter and logged 30 appearances before her opponent this week, Araujo, had made her professional debut. “Also, on The Ultimate Fighter, it wasn’t my normal coaches, so I’m hard on myself and think I should be able to push through anything.

“However, it’s really great emotionally and mentally to know I have these guys in my corner,” she continued, speaking about Wood and her new wrestling coach, UFC veteran John ‘ Guns’ Gunderson.

While some fighters switch coaches numerous times over the course of their career, others stick with the same crew for extended periods of time and, in either case, building a connection and establishing trust with those individuals takes time and is vital to an athlete’s success.

Shuffling things around can bring about uncertainty and doubt, and when you don’t have the time to establish a strong rapport prior to stepping back into the cage, it can lead to greater anxiety and nerves, even for someone as experienced and knowledgeable as Modafferi. 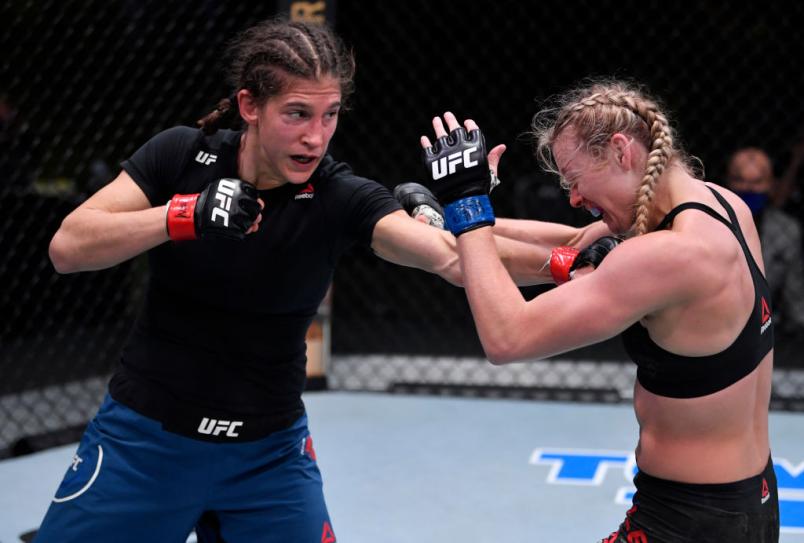 Having once again established a strong connection with her coaches, the two-time TUF contestant and most experienced member of the flyweight ranks is eager to get back into the Octagon and show the world what they’ve been working on.

“‘Guns’ and John coach me every day in sparring and place themselves next to wherever I’m sparring, and they corner me and I’m grateful for that,” offered Modafferi. “I’ve recognized that, as a fighter, I need that — I need that in order to really thrive.

“I started working with ‘Guns’ — he’s been giving me wrestling lessons — and I got back with John Wood, who has helped me find some literal balance in the way I stood in my stance and I feel like I’m more sharp now than I have been in the past,” she added. “I’m super-excited to show my big improvements in this fight.”

Two other factors that have contributed to Modafferi returning to her natural state of positivity and excitement are that she’s not facing off with a familiar foe and that for the second straight year, she’s getting an early start on her campaign inside the cage.

“I want a challenge and I want something new; I don’t want to be bored and fighting the same person over and over,” she told me in September ahead of her bout with Lee, whom she had faced and beaten under the Invicta FC banner just under six years earlier.

The 34-year-old Araujo owns a 3-1 record inside the Octagon and arrives in Abu Dhabi off a unanimous decision win over Montana De La Rosa in September. After debuting at bantamweight and registering a third-round knockout victory, she returned to her natural flyweight surrounds and out-hustled veteran Alexis Davis before dropping a unanimous decision to recent title challenger Jessica Eye at UFC 245. 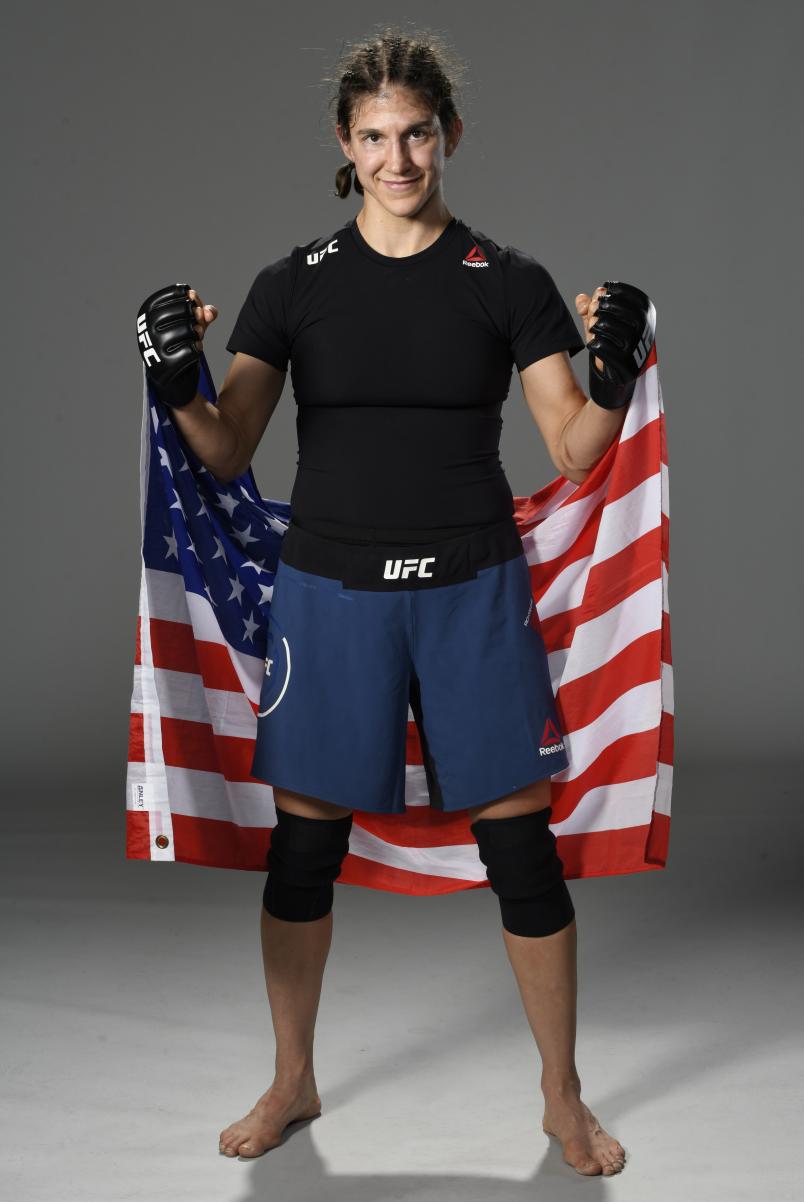 Roxanne Modafferi poses for a portrait after her victory during the UFC Fight Night event at UFC APEX on September 12, 2020 in Las Vegas, Nevada. (Photo by Mike Roach/Zuffa LLC)

Though Modafferi is currently stationed one spot ahead of her Brazilian foe in the flyweight rankings, it’s the type of quality pairing and potential victory the veteran needs in order to make headway in the 125-pound weight class.

“I am so excited with Viviane,” Modafferi blurted out enthusiastically when asked about her first assignment of 2021 and getting her wish to face someone who could potentially help her climb closer to title contention. “She’s new and I’m stoked to fight somebody new.”

In addition to wanting to face fresh competition, the Syndicate MMA representative wants to stay as active as possible and appreciates getting a January assignment for the second year in a row.

“It’s wonderful; I’m so happy,” said Modafferi, who authored one of the biggest upsets of the year last January when she defeated highly regarded prospect Maycee Barber at UFC 246 in Las Vegas. “I fought three times last year and there are more opportunities now because of COVID and people falling off cards.

“That’s sucks for them, but it seems like there are more opportunities and I’m really excited about that.”

After sounding slightly down, like there was something gnawing at her that she was unable to resolve ahead of her last fight, it’s nice to hear the positive energy return to Modafferi’s voice ahead of this bout with Araujo.

Clearly, the issues of last year have been dealt with, balance has been restored, and “The Happy Warrior” is full prepared to embark on another adventure.