Rousey, White, Eye Take On the Crowds at SXSW Festival, Discuss Explosive Growth of Women in the UFC 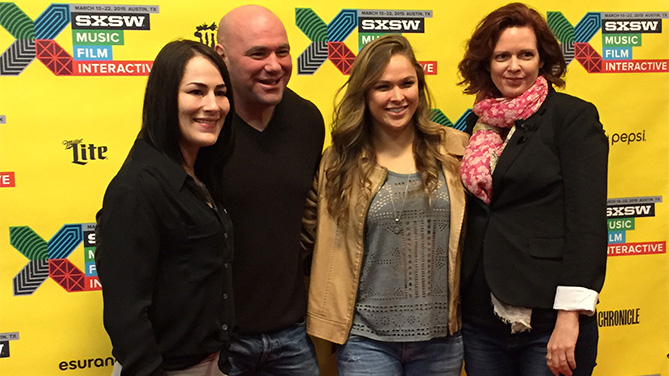 AUSTIN - Ronda Rousey has faced this provocative question many times, and she’s never wavered in her emphatic response. Would she ever get into the Octagon against a man?

“There should never be a venue where we’re celebrating a man hitting a woman,” Rousey repeated, and a large crowd at the South by Southwest 2015 Interactive Conference greeted her stance -- and her honesty -- with huge applause.

In other words, no.

And if there was any doubt, “With our organization, she’ll never fight a man,” said UFC President Dana White, drawing
more claps and hoots from a gathering of more than 1,000 who came to hear Rousey, White and UFC bantamweight fighter Jessica Eye, who’s ranked No. 6 in her division, speak about how women have become a dominant force in the UFC and professional sports, as athletes and as box office attractions.

The official topic Saturday at the 10-day music/film/interactive festival was “UFC: Women Breaking Ground Inside the Octagon,” an onstage panel discussion featuring Rousey, Eye and White.

The theme quickly became one of empowerment. And the message resonated well, at a global gathering famous for melding high-tech gadgetry and innovation, a place where movie stars and tech giants share bro hugs and a robot petting zoo is just another stop in your day.

After everyone watched a two-minute sizzle reel featuring female fighters in the Octagon and Rousey co-mingling throughout pop culture in movies and magazine covers, the more than 90-minute talk quickly turned to White’s one-time pronouncement -- showcased on the clip -- that women would never fight in the UFC.

After the rousing success of Rousey vs. Cat Zingano last month as the main event of UFC 184 at the Staples Center in Los Angeles, White concedes he was clearly wrong.

“Obviously, as you saw at the beginning of the clip I wasn’t a big fan of women’s MMA, until a few years ago,” White said. Selling men as UFC fighter on television was difficult enough, let alone women, he explained. And White never envisioned women’s MMA improving as quickly as it has.

“The women … the technique … it’s unbelievable. It’s unbelievable how good these women are, and how many good women are coming up in the ranks right now,” White said. “Obviously, Ronda is the reason it all started.” 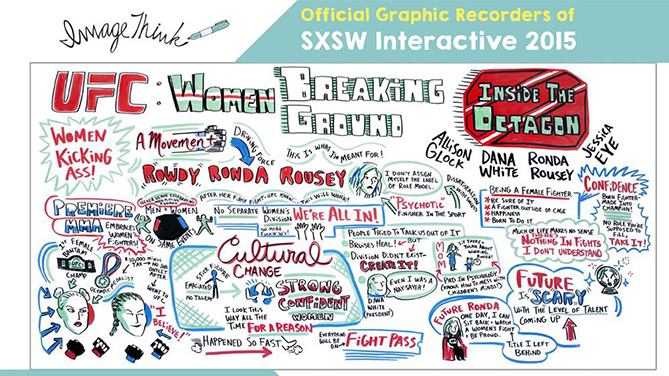 Women in the UFC has exploded from an idea to a movement, from three fighters under contract to 60 today, competing in multiple weight divisions. Rousey says that while UFC is a new regulated sport not grounded in tradition, like boxing or kick boxing, it’s growing at such a rapid pace because the UFC embraces change and innovation. And talented women are flocking to the sport because of that.

“Because the UFC was the only sport that was intelligent enough and had their eyes open enough and innovative enough to really believe this ‘women thing’ could work, all of the (combat sports) talent is going there,” Rousey said.

Rousey’s unique combination of uncommon athleticism, her competitive background as a two-time Olympian in judo, her tenacity and her drive to be the greatest in the world make her an electrifying star, White said. That star power validated his decision to make Rousey a main event ahead of veterans Lyoto Machida and Dan Henderson at UFC 157 on Feb. 24, 2013. 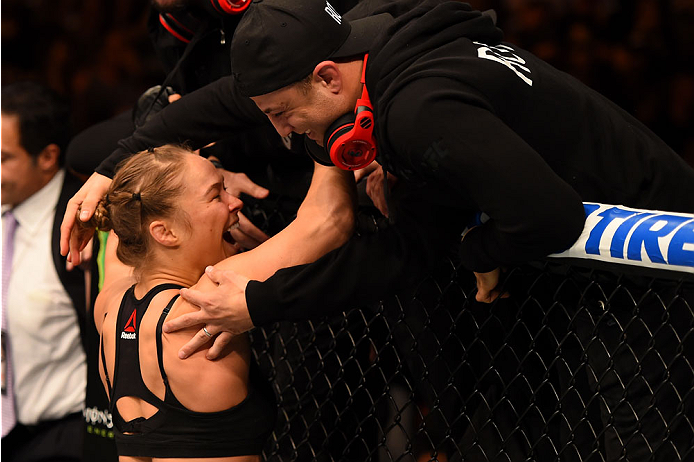 “You don’t see it anywhere else, any other sport or anything in this world,” Eye said of the UFC putting women in main events, ahead of or on par with their male counterparts. “Basketball is not like that, football isn’t like that. Even the Olympics isn’t like that. It’s still so separated.

“And we’re able to outshine these guys. Ronda does it all the time.”

And Rousey’s example has lifted the quality of those who compete against her.

“I didn’t think that the women’s side of the sport was at that level yet, where women would be so technical and amazing as they are,” White said of his initial hesitancy to support and promote women in the UFC. “I was completely wrong. This thing … it’s insane how fast women are excelling at this sport.”

Was there pressure to start a separate “WUFC,” White was asked.

“No, I would never do that. We’re all in, or we’re not doing it,” White said, and the crowd erupted in more applause.

“Thank you!” a woman shouted from the audience.

“We train in the gym together, we train with the guys,” Eye said. “We relate to them in that way. So why separate it?” 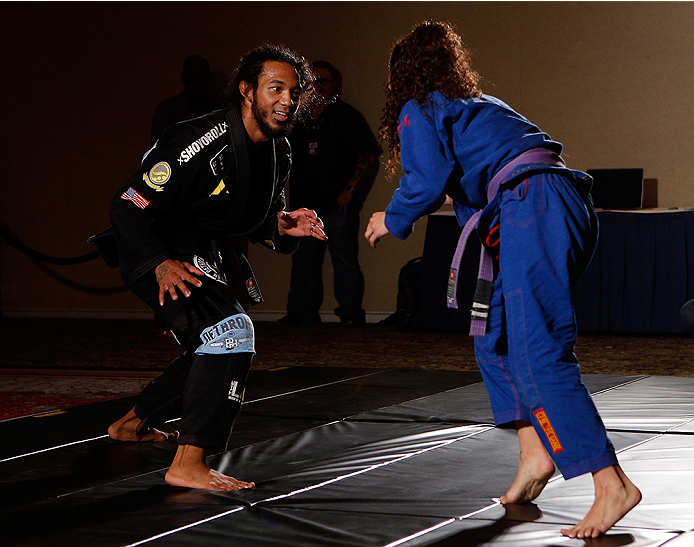 Said White, “There’s never been a scenario in the history of the world that I’m aware of, where people really believed that a woman could kick a man’s ass. Now there is. I say it all the time. I don’t care how tough any of you are – these two will walk through here and clean this room out!”

The bigger message, White said, is how Rousey, Eye and women like them are changing the way we look at what is possible for them.

“When I was growing up, girls played over here and boys played over there,” White said. “Girls were pushed into this, ‘this is who you are and this is what you do (box) ‘ as a girl. And man, is that changing. It’s changing fast.

“How many little girls were Ronda Rousey for Halloween? She’s a woman that they look at and think, ‘That’s how I want to be. I want to be a bad ass, strong woman like her.” 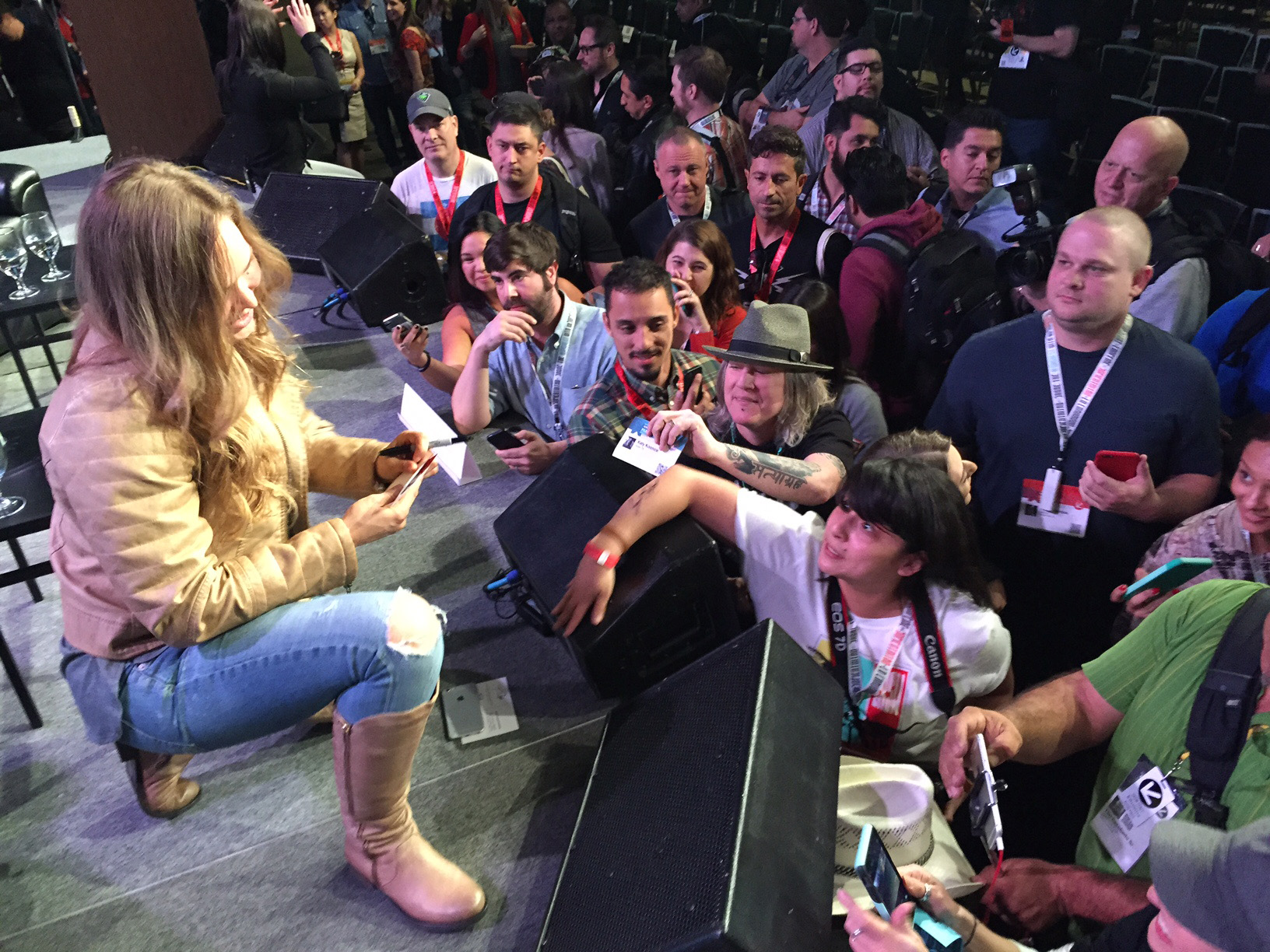 Rousey, wearing a tan leather jacket, tan boots and ripped jeans -- “When I knew I was coming here, I thought, ‘Perfect place to sit on a black couch, chill, talk and wear my ripped jeans!” she said excitedly -- was relaxed and comfortable talking about her position as the beacon for women in combat sports, and as an inspiration to young girls and women looking for powerful role models.

All the same, she said, she’s not comfortable being a direct role model for others.

“I try to do the best I can for my little sister and my nieces. But I don’t think that anyone is going to be good enough for your kid,” Rousey said. “For me to assign myself the label of ‘role model’ and say your kid should be like me, I’m never going to say that.

“I do the best that I can, and the way that I’m perceived is out of my control. I try not to think about every single thing that I do. I don’t want to act like there’s an eight-year-old following me around everywhere I go, all day long, because I’ll go nuts.

Rousey spoke at length about the influence of her mother, judo legend AnnMaria De Mars, who holds a PhD in educational psychology and constantly pushed her daughter to be powerful in mind and body as she competed every weekend in Southern California judo tournaments.

“Every girl doesn’t have to become a fighter,” Rousey said, “but every girl can see that, even if something is perceived 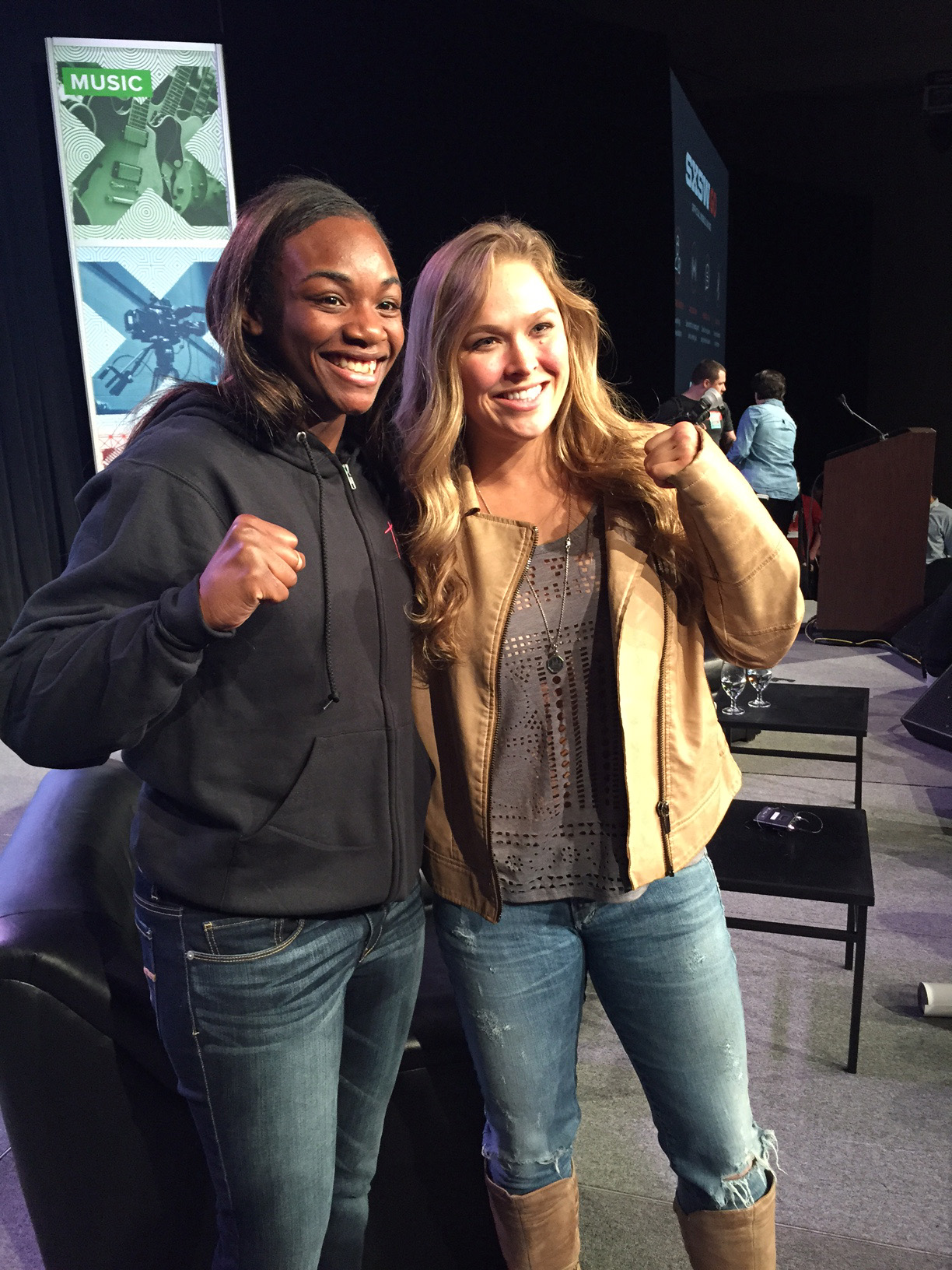 Afterward, Eye and Rousey mingled with fans, male and female, taking pictures and videos and signing autographs. They offered hugs and words of encouragement.

She and Rousey exchanged phone numbers and embraced.

“What she is doing for sports is amazing,” said Shields, 19, a middleweight who will compete for another gold in Rio de Janeiro. “She’s an example of for women in combat sports and women everywhere.”

Did Rousey feel pressure when handed the baton to launch women in the UFC:

“Of course I felt pressure. It was a lot on my shoulders. I didn’t just have to win, but the card had to be successful. No amount of pressure is comparable to the Olympics and I’d already been to two Olympics, so it was like, ‘OK, this is my environment and this is what I’m meant for. I’m supposed to handle this. I’m supposed to handle it.

“That Maxim magazine (cover), it was called the “Tough Issue” and it was about tough chicks! … it’s really changing, and you see a difference in the idea of what women think they should look like.”

“I see the idea of what a strong, what a sexy, accomplished woman is, it’s changing, and that’s what I’m happy to be a part of. I’m not the leader of it, at all. But I want to help.”

Rousey, on her spot in the Sports Illustrated “body” issue:

“I feel like that is really looking at the ideal feminine form. So I purposely do shoots like that in my walking weight. If I took my stuff off right now, I would look just like the swimsuit issue. That’s how I walk around. I don’t cut weight like that. I don’t like the idea of what is good looking to be something that I’m not. I’m 135 pounds for a few hours a year! When I go in the magazines, I don’t want to tell a lie. It would be unhealthy for me to look like that every day. “

“It got to the point where I realized that the job that I wanted, and the niche that I wanted, didn’t exist. So rather than just accepting that, why not create it?”

“The thing that is so unique and fascinating about her is the entire package that Ronda has. Obviously she is an attractive lady. She’s very intelligent. And she is such a psychotic competitor. She’s literally psychotic about competing and winning. And when Ronda wins, she doesn’t want to win. She wants to stop you. “