Rousey tells Brazil, Correia, 'This Is A Personal Fight' 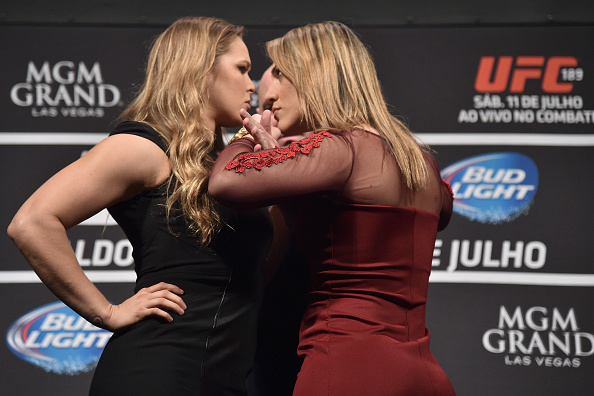 RIO DE JANEIRO - Ronda Rousey made quick work of Cat Zingano at UFC 184 and she didn’t have to wait long for her next title defense. The UFC female bantamweight champion appeared at Rio de Janeiro’s Ginasio do Maracanãzinho on Friday to confirm she’ll face unbeaten Brazilian Bethe Correia on Aug. 1 in the main event of UFC 190 at Rio’s HSBC Arena.

Much like the Jose Aldo-Conor McGregor UFC 189 grudge match – one that features a smack-talking challenger moving up the ranks to battle for the belt – Correia’s open call-outs to Rousey have been pointed and extremely personal.

After Rousey’s judo-inspired 14-second submission of Zingano at Los Angeles’ Staples Center on Feb, 28, Correia stood up in the postfight news conference and openly exhorted Rousey to fight her.

On Friday, the challenge was officially accepted.

“I would definitely say this is a personal fight,” Rousey said Friday, sitting atop a stage at Maracanãzinho with UFC President Dana White at the dais and Correia flanking him. With that, the huge crowd – thrilled to see Rousey in person in Brazil -- cheered wildly.

Rousey’s 14-second title defense over Zingano was the fastest finish ever in a UFC championship bout, and her last three title defenses have spanned all of 96 seconds, total. At 11-0, she is widely considered the finest female fighter in the world, and her first UFC contest outside North America against the audacious Correia has been on Rousey’s radar for some time, she admitted.

Why would the champ feel compelled to come to the challenger’s turf to settle this score?

“What I really need when I fight is passion,” said Rousey, who previously competed in judo in Brazil, “and this is the most passionate country I’ve ever performed in. It’s real pleasure to be here, whether as a bad guy or a good guy, whatever.

“I felt like if I was really going to make an example out of Bethe, I don’t just want to defeat her. I want her to leave that arena embarrassed! And the best way to do it is to come here and beat her in her own backyard.”

Across the stage, Correia (3-0 UFC) shot back a confident look.

What does she feel she brings to this fight that sets her apart from Rousey’s five previous championship challengers?

“This is my dream coming true,” Correia, 31, said excitedly, urging on the fans like a preacher at a pulpit, “and this will be your dream, also. The first Brazilian woman to be a world champion, in her hometown!

“What I have more powerful in me, first of all, is my faith, my struggle and my will power, which makes me able to beat anyone. And I’m going to beat Ronda. I promise this to you. This belt belongs to you, and it’s going to be here in Brazil. She’s coming here and she’s going to leave the belt here!”

And then the gloves really came off.

Someone asked Rousey whether Correia’s attacks against her and those close to her are similar to the verbal sparring McGregor engages in against his opponents, particularly his taunts of Aldo.

Did Correia get this title shot because of her smack? Or did she truly earn it?

“I understand why she went about things the way she did,” Rousey responded, her anger rising. “But just because I understand it doesn’t mean that it’s OK.

“The fact is, in order to get a title shot as quickly as possible, she disrespected my fans, which I consider my family. And if you f--- with my family, you are f-----!”

“The fact is, in order to get a title shot as quickly as possible, she disrespected my fans, which I consider my family. And if you f--- with my family, you are f-----!” - Ronda Rousey

“Yeah, I guess I feel a lot like the way Jose might be feeling, that he feels disrespected,” Rousey said. “This fight is more than just an athletic competition. It’s about proving a point. And punishing someone.”

Correia, who promised the crowd that Rousey “will feel my punches,” turned up the already steamy Rio temperature even higher with yet another personal attack against the champ.

“What I want from Ronda is a gift, something she’s never gotten in her life, which is a heavy punch!” Correia said in her native Brazilian Portuguese, describing how she would remove Rousey’s birthmark from her face. “She needs to feel a heavy hand. She gets away from striking, because she doesn’t like it. She is going to try to get away from me. Let’s see what happens.”

Rousey absorbed the barrage of venom with a smile – and a promise.

“I can start going on about her physical appearance,” Rousey responded, “but I’m not even going to go there, OK? Let’s not play the ‘pretty awards’ between me and her. I’m here to win.”