Rousey Ready for Next Challenge 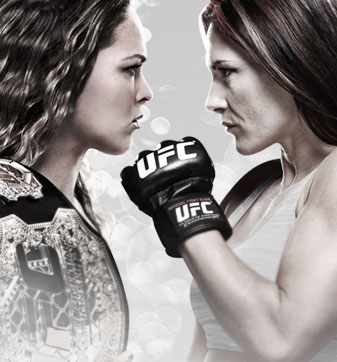 No matter how many top fighters she beats, Ronda Rousey will always be mommy's little girl.

The UFC women's bantamweight champion is among the most dominant competitors in recent MMA history. Her continued success against the 135-pound elite recently resulted in UFC president Dana White joking the 2008 Olympic judo bronze medal winner could be one fight away from facing men.

Though White's remarks were merely playful, it's clear Rousey has been knocking them down quicker than the UFC can stand them up. In 2014 alone, she needed less than 90 seconds to knock out both Sara McMann and Alexis Davis.

Rousey knows her path of destruction can be both a sin and blessing for UFC matchmakers, but said that's hardly her concern. When she steps into the octagon, her duty is to give her mother, AnnMaria De Mars, little cause for concern by delivering another vicious performance.

“Dana was making the joke that I'm making his job difficult, but it's not my job to make his easy,” Rousey laughed on a recent media conference call. “It's my job to give my mom as little stress as possible. (Whether I) win as quickly or efficiently as possible, I just want to be unscathed.”

“Even after my last fight (against Davis), when my knuckle exploded, I spent the whole time trying to hide my hand from my mom.”

Rousey aims for another quick night when she defends her title against undefeated Cat Zingano in the headliner of UFC 184 at the Staples Center in Los Angeles Feb. 28. The co-main event will feature a pivotal women's bantamweight bout as highly-touted prospect Holly Holm debuts against Raquel Pennington.

Though Rousey has made a career of putting opponents away early — her sole trip outside the opening frame resulted in a third-round submission victory over Miesha Tate in late 2013 — she isn't banking on an easy outing against Zingano.

A dangerous striker with a strong ground game, Zingano's toughness has been on full display in her two UFC appearances, which saw her score spectacular comeback TKO wins against Tate and Amanda Nunes. Her resolve was even further tested when her husband, Mauricio Zingano, tragically committed suicide in early 2014 while she was recovering from knee surgery.

Rousey said she can't afford to get reckless against the durable contender.

“Cat's resilience is one of the things that has really impressed me most,” Rousey said. “I think that's what has gotten her most of her fans. It's not just the way that she fights, but the way she endures. It's extremely impressive. It's one of those things I will definitely keep in mind for the fight.

“She's not someone who can be intimidated, so I won't even bother. She's not one of those people that can start losing a fight and then you can count of them beating themselves. She's one of those people that has to be finished until the very end — and I'm ready for that. I'm ready for a five-round war if it needs to be that way, but I'm still going to be the better fighter that night regardless of what happens.”

The bout with Zingano not only marks Rousey's fifth women's bantamweight title defence, it's her first outing since July. She was sidelined after undergoing surgery to correct lingering knee issues.

With the procedure behind her, Rousey said she will not only be able to perform to the best of her ability, but she also narrowly dodged a potentially catastrophic knee injury.

“You have to remember I've been pretty much fighting all my UFC fights on one leg,” Rousey said. “Now I feel better than when I was 16 years old, when I got my first knee surgery. I really feel rejuvenated.

“Even my mom — who is the biggest into working hard all the time, more than anyone you'll ever know in your whole life — was telling me, 'You need to rest your body. Your body is telling you something.' I'm very glad that I did because when I cleaned up everything in my knee, I found out I had an arthritic spur literally rubbing on my ACL. It could have ruptured at any time.”

If Rousey has proven anything during her career it's that her confidence is as strong as her skill set inside the cage. She has no doubt she will find a way to finish Zingano.

Though she has laid waste to the top women's bantamweight fighters in the world, she doesn't feel a win at UFC 184 means she's cleaned out the division. From Rousey's perspective, once she's dispatched Zingano, White's job is about to get even tougher.

“There is definitely a lot of competition at 135 — this card is evidence of that. We have women in the main and co-main events, because we have that many high-quality fighters that are worthy of the honour.”

Rousey's top priority may be to further assert her dominance as champion, but said she, as well as the Zingano, Holm and Pennington, have the opportunity to prove women deserve to headline events on the biggest stage in MMA.

“It's a great opportunity to prove something,” Rousey began. “I think this card is going to perform extremely well. Compared to (events headlined by) the guys, it's going to hang in there and be respectable.

“That's why they have enough faith to put us in there. The UFC has been around for 20 years. They know how this works and they're not going to put a card together if they think it's going to fail.”