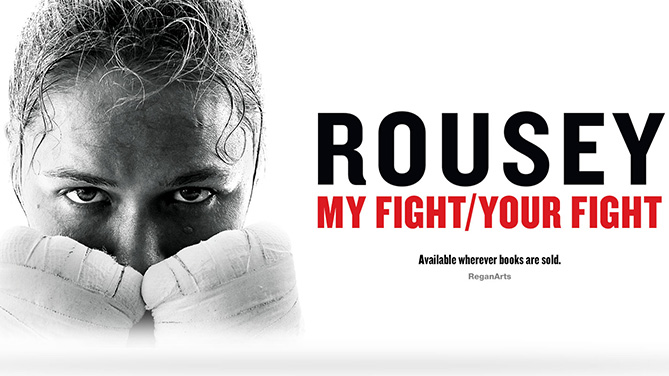 Ronda Rousey wants to grab our attention and command it, much like she grasps her opponents in the Octagon and quickly subdues, then destroys them. It’s the complex, menacing mentality of a warrior that is difficult for non-fighters to truly comprehend.

Rousey, who is without a doubt the emotional and cerebral offspring of a steadfast family with a distinct fighting spirit, has offered us a stunning peek into what makes her the most dominant UFC athlete on earth.

“My Fight/Your Fight,” is Rousey’s first book, and there is no doubt this is an authorized biography: The UFC undefeated bantamweight champion co-authored the gripping 300-page elucidation of her life and success with journalist Maria Burns Ortiz, who just happens to be Rousey’s sister.

We learn that Rousey’s 28-year path to her current pinnacle of movie stardom, endorsement deals, cover model fame and professional sports domination has not been as efficient as her devastating takedowns of UFC and judo opponents.

Along the way, there have been wars waged against foes, internal and external: 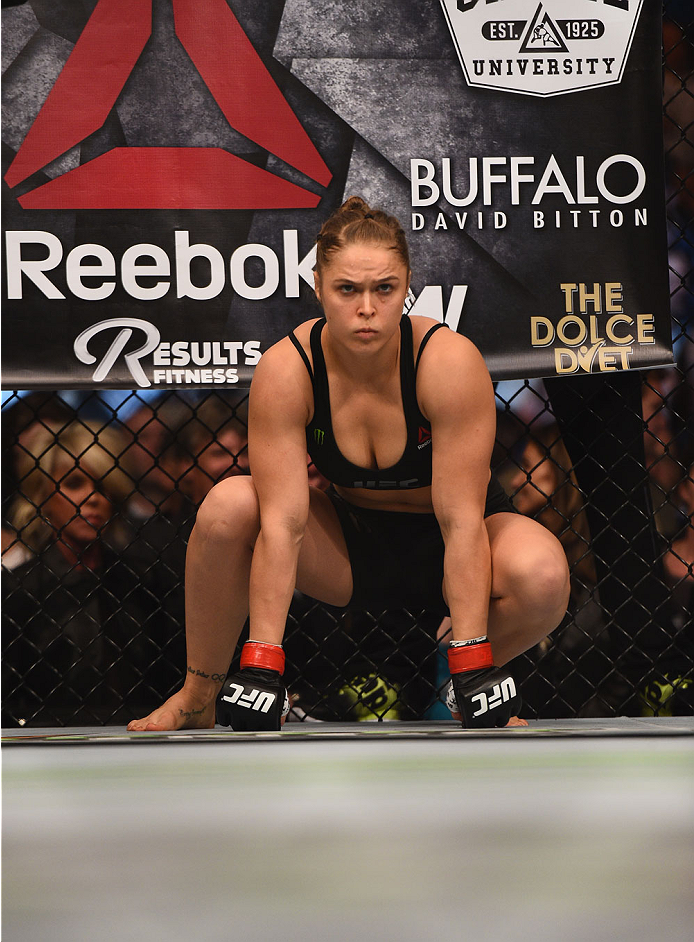 --Rousey writes of her struggles with her weight as a competitive judoka, including details of a binge-purge eating disorder that she eventually cast aside by embracing a more realistic fighting weight and smarter training methods.

--A self-imposed hiatus from competition between her judo and MMA careers left Rousey directionless and, at times, homeless.

--Numerous boyfriends – none of whom is identified by name – have either disappointed Rousey or exploited her naiveté. One longtime, doomed relationship was with a kind soul who was a recovering heroin addict. Some of her relationships involved emotional and physical abuse.

Another boyfriend Rousey met at a judo club -- she calls him “Snappers McCreepy” -- exploited her fondness for eschewing clothing around the house by secretly compiling a digital folder of nude photos of her on a laptop they shared.

“I deleted the photos. Then I erased the hard drive,” Rousey writes. She dumped the boyfriend in spectacular fashion, and the encounter compelled her to pose sans clothing on her own terms, in ESPN’s annual Body Issue. 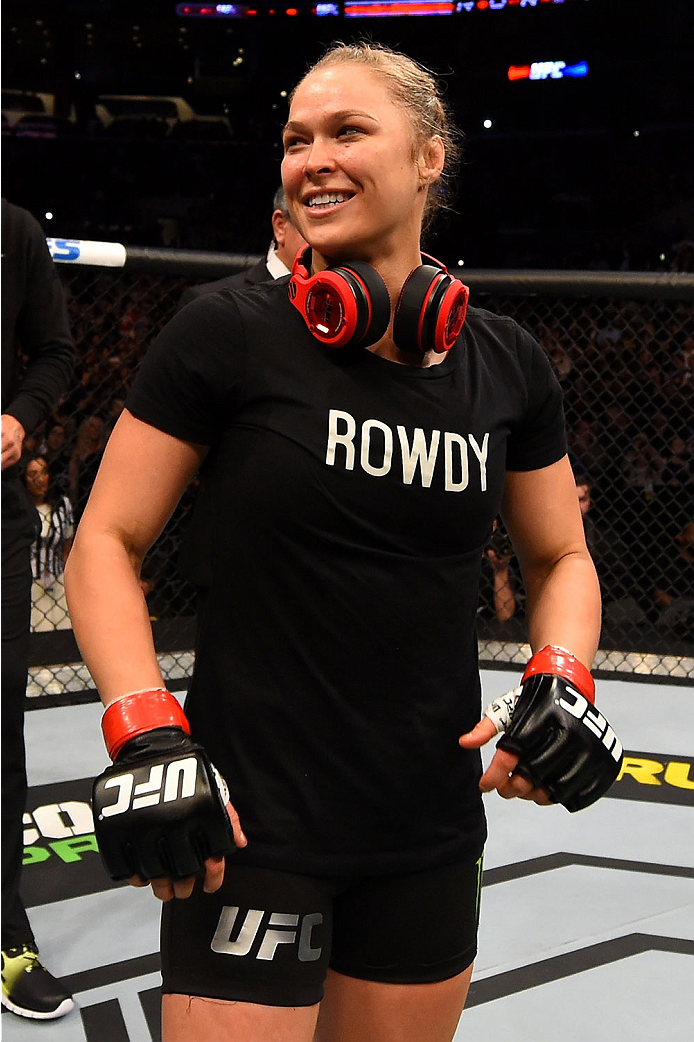 “To be a fighter, you have to be passionate,” Rousey writes in the book’s opening, explaining why you need a strong heart to succeed. That drive helped her make two U.S. Olympic teams in judo, and she’s candid about how her bronze medal in the 2008 Beijing Games left her unfulfilled.

She recounts her determination to win over UFC President Dana White, to convince him to see the potential of women as UFC superstars. Mission accomplished: White writes a very moving forward praising Rousey’s empowerment of women and girls in “My Fight/Your Fight.”

There have been staggering losses – her beloved father and namesake, Ron, sustained a serious, crippling sledding injury that was exacerbated by the diagnosis of a chronic illness, and he took his own life when Rousey was eight years old.

There have been multiple challenges to buffer Rousey’s myriad triumphs, and she boldly bares all in a book that is fascinating to read and tough to put down. 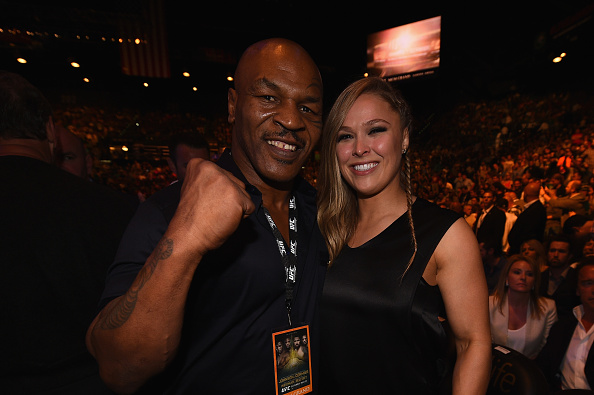 She speaks from experience.

After almost dying at birth from her umbilical cord strangling her neck, Rousey’s family helped empower her to overcome speech difficulties thought to be a result of that early oxygen deprivation.

To wit: At age 12, Rousey writes about a judo teammate who twisted her ankle and was doted upon by extremely attentive parents. Twenty minutes later, Rousey broke her toe while sparring and limped to her mother, hoping for similar sympathy.

“Go run laps,” De Mars told her stunned daughter, explaining the command this way: “If you ever want to win the way you say you do, you need to be able to compete, even when you’re in pain … now you know you can do it.”

Rousey writes, “In the years since, I have competed with broken toes and sprained ankles – not to mention with the flu and bronchitis.” She’s also competed with a broken foot, and battled to recover from a torn ACL – toughness she attributes to her mother’s distinctive parenting style.

As disciplined as she is in training and competition, the woman dubbed by Sports Illustrated as “the world’s most dominant athlete,” is astonishingly candid in “My Fight/Your Fight,” graphically detailing her strengths, weaknesses and foibles as she’s negotiated an uncommon life.

The tales of training and competition in this compelling book are vividly written, so much so that readers may feel themselves walking into the Octagon along with Rousey, with the beat of her favorite walkout song, Joan Jett’s “Bad Reputation.”

But the most compelling struggles Rousey reveals are her battles she’s waged against herself. In telling them, Rousey clearly hopes her audience will gain inspiration and strength through the lessons she has learned. And the wisdom she continues to acquire.