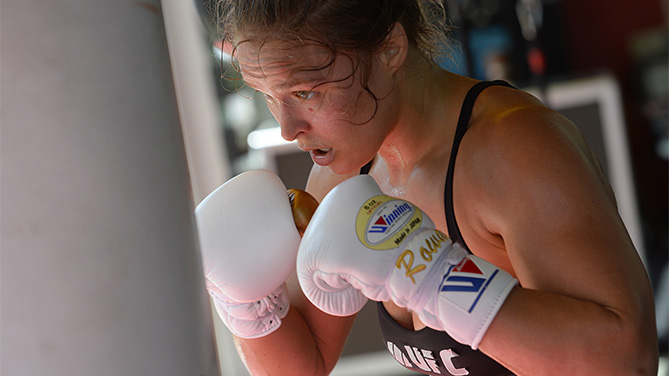 Ronda Rousey was sweating it out at the Glendale Fighting Club on Thursday but not from punches and kicks and sparring.

Rousey took a break from training camp preparation for her Aug. 1 UFC 190 fight against Bethe Correia for interviews before Brazil. Her star power has grown so much that about 60 reporters and photographers made the small California gym pack a punch full of sweat. 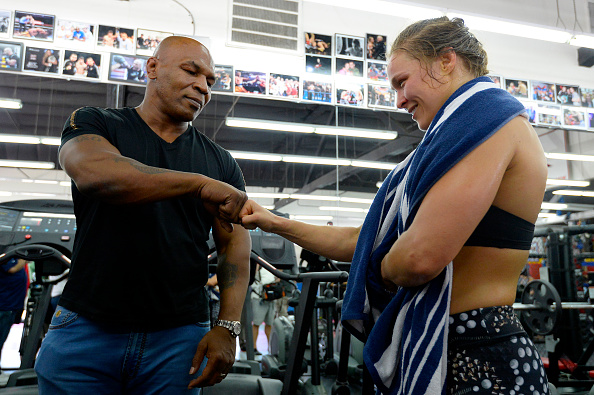 Using a UFC folder, Rousey fanned herself to keep cool. She also kept her cool at the ESPYs during a banner day in which she won awards for Best Female Athlete and Best Fighter. She was all the rage on news and sports shows after lobbing a verbal jab at Floyd Mayweather, who was also up for Best Fighter.

"I wonder how Floyd feels being beat by a woman for once," Rousey said Wednesday on the red carpet. "I'd like to see him pretend to not know who I am now."

Mayweather has a lengthy history of domestic violence. He’s been charged six times and served a two-month stint in prison in 2012 for the 2010 beating of the mother of three of his children.

Rousey was still steadfast in her disdain for Mayweather, who claimed last year he didn't know who she was.

"I know for damn sure he knew who I was," Rousey said. "He was running against me for best fighter that year, and he has signed MMA fighters. His feigned ignorance was meant to be a really snarky remark to me. All of the media really tried to create a rivalry out of it. I was sitting on the couch post-surgery. I got surgery the day before on my knee. I don't let those kind of things slide, but I'm a patient girl. I wanted to respond at the most appropriate time where I thought I could make the biggest impression that I'm not the kind of chick you can make snarky remarks about.

Rousey's upcoming fight is two weeks away, and the 28-year-old saw the potential for a landslide of publicity with the timing of the comment.

"Yeah, I thought it would get a big reaction," Rousey said. "I have a fight to sell. Great timing, huh? I'm not dumb." 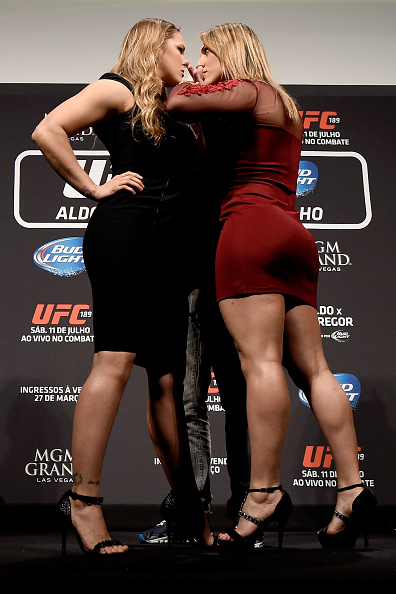 She knows Mayweather, who is also in training camp for his next fight in September, surely heard about it. She wouldn't mind hearing his thoughts on the comment but isn't expecting a reaction.

"I don't really know what he could say. I'd be interested," Rousey said. "Not surprised if I didn't hear anything at all."

Asked if her "beat" comment was in reference to Mayweather's past alleged domestic violence cases, in which he served jail time, Rousey said: "Oh my God. It's pretty obvious, to be honest. Yeah."

Rousey was still beaming over her awards and her ESPYs date. She took her mom, AnnMaria De Mars, and thanked her in her acceptance speech. She teared up about what that meant to her.

"It's nice to try to give my mom a fraction of the credit she deserves," Rousey said. "I'm still nowhere close to giving her all the credit she deserves. Bringing her and letting her see a piece of what we created together could do that a little. She deserves so much more than I've given her already. I'm trying to do the most we can."

Rousey and her mom have made a solid team, and her honesty - including the jab at Mayweather - is a big part of her likability that has helped made her a star.

"I'm just trying to be myself and trying to not lose my sanity in the process of all this," Rousey said. "I guess the main thing is blatant honesty. (That's) one of the main reasons my brand has (risen).