Rousey feeding off pressure ahead of Holm 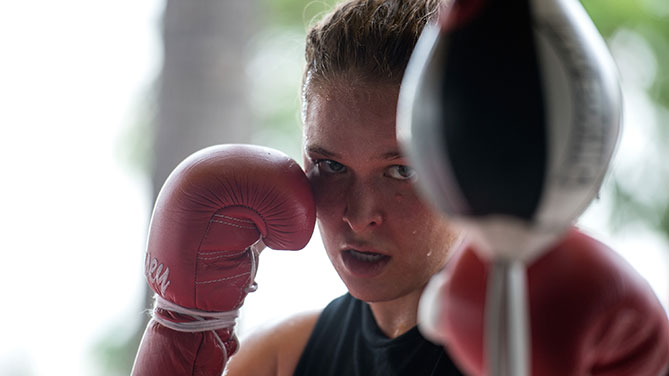 Ronda Rousey can see everything.

No one knows it, but she’s watching. Somewhere behind a closed door at the Glendale Fighting Club, she’s peering at security monitors, studying several dozen journalists, photographers and camera operators waiting for her appearance.

They’ve been waiting a while, but Rousey is busy being coiffed and made up for an anticipated media session intended to promote UFC 193 in Melbourne, Australia, on Saturday night.

She’s in no rush. In a way, neither is the media. They’ll wait for however long it takes for Rousey to make her grand entrance. And when she finally appears, not unlike an A-list actress about to walk the red carpet, the room falls into a hush except for the nonstop clicking of camera shutters.

She’s perfect: her hair, her tomboy outfit, her shy smile as she bows her head slightly to acknowledge her audience. Then she lets them know she’s been watching.

“The security camera looks crazy with all you guys in here,” she says.

This is her world. Crazy, yes, but nothing she can’t handle. She is the UFC’s first and only women’s bantamweight champion, a title she has held since February 2013, and her star has never glowed brighter. Each day brings more attention, more media, more notoriety, but Rousey doesn’t flinch.

And still, it remains something she must adjust to.

“I can’t really be used to it because every time it’s a little bit more,” she says. “I just kind of accept whatever situation I step into. I get used to the idea that it’s always going to be different and I just have to be ready. I don’t think you can ever be used to it.”

She’s doing well anyway. Rousey is more than just an MMA fighter; she’s a cottage industry, making commercials, acting in movies, modeling in magazines, juggling TV and radio interviews. All this while trying to keep her UFC crown firmly on her head.

So far, no one has come close to taking it. Holly Holm, the opponent Saturday night at 70,000-seat Etihad Stadium, is the seventh challenger and best boxer Rousey has faced since turning professional in 2011. But Rousey, a bronze medalist in judo at the 2008 Olympics in Beijing, considers herself an adept boxer, too, and may choose to prove it by standing and trading punches with Holm.

Or she may not. Her coach, Edmond Tarverdyan, says he believes Holm will run and use her kicks to keep a safe distance from Rousey. If they box, he believes, the first clinch could result in a takedown by Rousey and a submission.

“Regardless of what she does, how much she runs, she can’t hide,” Tarverdyan says.

Boxing is Rousey’s latest love, but she still can’t shake her regret over the Olympics. Her failure to win gold left her empty and unfulfilled, yet it created a hunger that fuels her inside the Octagon and in the gym.

“That was my childhood dream,” she says. “I spent my whole life in pursuit of that and I had to give it up. I had to come to terms with the fact it wasn’t for me. I’ve always really been heartbroken from that in a way. And in a way I’m still very grateful for it because if I did win the Olympics, I wouldn’t have this never-ending resource of motivation.

“Every single time I go out there to defend my title, it’s another chance to redeem myself. But it’s never quite an Olympic gold medal.”

You can almost feel her pain. Winning in the Octagon isn’t the same, no matter how many times UFC president Dana White wraps the belt around her waist. The thrill comes close, but it always falls short.

“It’s not about being a thrill,” she says. “It’s the pressure. In judo, you train your whole life and you have one day to be an Olympic champion. That’s it. In MMA or boxing or any professional combat sport, you can try to win over and over again. You can have title fight after title fight after title fight, and eventually one of those shots you win, you’re still a world champion. In the Olympics, you have one shot and that’s it. It all comes down to one day, and nothing can compare to that pressure.”

Perhaps not, but being Ronda Rousey – a woman, a champion and arguably the face of the sport – has its challenges. People want to know what she thinks about anything and everything: being a role model for young women, acting, her Hispanic heritage, her popularity, even her favorite music.

Then it comes back to pressure. Performing for crowds, in front of a sold-out stadium in a foreign land.

That's the environment I do the best in. I know if me and Holly were fighting alone in some high school gym, I wouldn’t do nearly as well as if we had 70,000 people and all that pressure and cameras.

“That’s the environment I do the best in,” she says. “I know if me and Holly were fighting alone in some high school gym, I wouldn’t do nearly as well as if we had 70,000 people and all that pressure and cameras. I don’t get scared of how nervous I get and all the pressure and attention and the crowds and everything because I know in my heart that’s when I do best.

“So I don’t feel bad like, ‘Oh no, is it bad that my heart’s beating this fast or I’m breathing this hard?’ I don’t second-guess myself that these are the good things. This is what I’m best at. This is where I belong. This is my environment. I don’t shy away from it.”

And that’s why the best outcome for Holm, Rousey has said, would be to take her beating and go home to Albuquerque, where she can enjoy a quiet life away from the spotlight. This is clearly gamesmanship Rousey’s part, but she’s convinced only she can cope with the attention that comes with being a UFC champion.

“She seems like a very, very nice person and a sweet girl,” Rousey says, almost too kindly. “She’s the kind of person like, after I beat her and she makes a lot of money, I’m like, good for her. You buy yourself an Albuquerque house with that. The last chick, I was like, she’s a bitch, I kicked her ass, she made a lot of money, well, whatever.”

That last chick was Bethe Correia, who drew Rousey’s ire by making a disparaging remark that Rousey took personally. The result: a knockout after 34 seconds at UFC 190.

The lesson here: Don’t get Ronda angry. You might as well stand in front of a charging bull with your hands behind your back.

Holm has done none of that. Their interviews and staredowns have been cordial, but it hasn’t changed the way Rousey views the likely outcome.

“I’ll hope she accepts her loss in a healthy way and enjoys all the benefits she got from this fight,” she says of Holm. “I think she’ll enjoy her life a lot more. The life of a champion isn’t for everybody, and the life of a contender is a lot nicer in a lot of ways.

“A lot of these girls don’t realize until they’re the contender and they get all that extra pressure put on that they don’t really want that life. This kind of environment isn’t what Holly would like. I hope she takes the money that she gets for losing and has a great life.”

Rousey, on the other hand, was made for this. There are certain subjects that turn her sideways, but for the most part she is accepting of the glare that accompanies stardom.

Holm, she believes, wouldn’t be.

“I don’t think she’d be comfortable with it, and I think it would take away from her quality of life, to be honest,” Rousey says. “It’s a skill you have to learn. I’m still learning. It’s not easy, but you have to learn to enjoy certain things but still stay sharp and not be so relaxed that you make mistakes. I just don’t think it’s for some people.”

It’s no problem for Rousey, at least no outwardly. But it’s not easy either. “If any of you guys could sit right here and keep your sh*t together,” she tells reporters, “I would be really impressed. It’s tricky sometimes.”

That’s why she says, “Fighting is my sanctuary from all that. It’s my escape from it.”

And it remains so. In the gym, with Tarverdyan and her crew, she’s at home. The training grind comforts her like nothing else. She can work and sweat and dream without feeling she is being scrutinized.

Give her a choice between the gym and a bunch of reporters prodding her with questions. It’s not even close.

“This is the place where I keep my focus and my sanity,” she says of the Glendale Fighting Club. “Whatever kind of crazy things are happening outside of fighting, it just makes me go inside the gym more because that’s my escape from all that.

“I could sit on the couch and get anxious about all kinds of things. The way I treat myself, my medicine, is to come back in here and focus and fight. It’s a time when I’m entirely in the present moment and none of those things exist anymore. The more chaotic everything is outside, the better I do in fights. 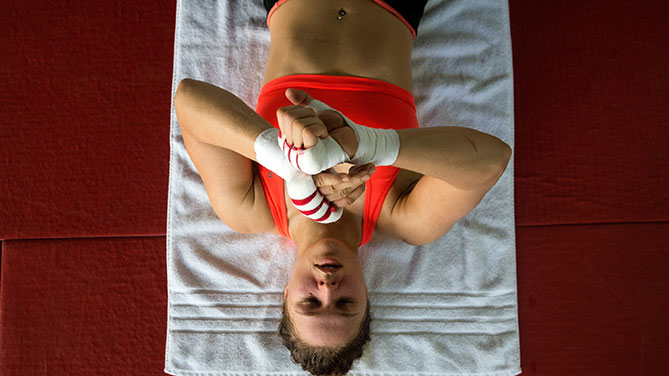 “The best performances I’ve ever had, I was in the most emotional turmoil beforehand.”

Maybe she’ll feed off that Saturday. There’s enough going on to motivate her. There is also the fact she’s the best MMA women’s fighter in the world, at least until someone proves otherwise.

“She’s a natural-born fighter,” Tarverdyan says. “When you have a fighter like Ronda, it’s a blessing. I tell her, ‘No way anybody in the world is ever going to put your back against the cage, right, champ?’ And she says, ‘No.’

“One hundred percent I believe that. I have no worries. Mentally, she’s prepared.”

You look at her and listen, and you agree. There is no fear, or so it seems.

So you ask. Fear? Does she feel it?

I’m full of fear, but I don’t have any doubt.

“I’m full of fear, but I don’t have any doubt,” she answers. “There’s a big difference. I’m so fearful that I train harder than anyone, but I don’t doubt for one second that I’m capable of succeeding.”

She stares you down. You believe it, too.