Read on for results from the main card of UFC 170, held February 22 at the Mandalay Bay Events Center in Las Vegas....

As the Winter Olympics were taking place across the globe in Sochi, two past Olympians entered an Octagon in Las Vegas to decide the UFC women’s bantamweight championship. In the end, Ronda Rousey, a bronze medalist in judo, TKOd Sara McMann, a silver medalist in wrestling, to defend her UFC gold. More notably, the win was the undefeated Rousey’s seventh in the first round, and her first-ever by TKO, with all of her previous wins coming by armbar. Plus, Olympic wrestler Daniel Cormier kept his own perfect record intact with a first-round TKO of his own.

McMann charged at the bell, getting in a solid right hand as the two tangled with fists flying. As they clinched against the cage, both got in knees and McMann landed another right, but McMann was able to fend off Rousey’s signature takedown. So Rousey settled for striking, landing a particularly nasty elbow before the finishing blow.

A knee from Rousey buckled McMann, who hit the deck, and as Rousey followed up with right hands from the back, referee Herb Dean waved it at 1:06 of the first.  The crowd booed but McMann was gracious in defeat, pointing out that no amount of training can strengthen your liver for a shot.
Rousey’s record remains unblemished, as she now stands at 9-0 with a nearly-ridiculous number of finishes (nine) and armbars (eight). McMann, who said afterward she’d be up for a rematch, moves to 7-1.

A coffee shop worker two weeks ago, Patrick Cummins made the most of his Cinderella opportunity 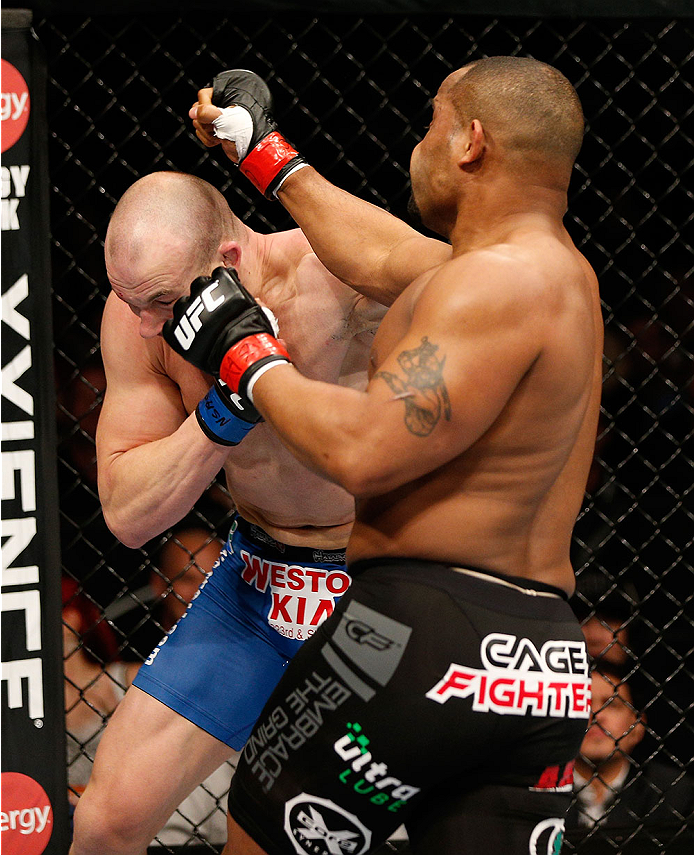 to join the UFC, offering to fight former training partner Daniel Cormier after Cormier’s original opponent, Rashad Evans, dropped out. But in the process, he also made the former Strikeforce Heavyweight Grand Prix winner Cormier mad by bringing up past wrestling-room gossip, an unspoken gym no-no. Cormier responded by running to the Octagon during his walkout, then scoring a first-round TKO (and his first UFC finish) in his light heavyweight debut.
After some leg kicks, Cummins went for a takedown right away. Olympic wrestling team member Cormier was having none of it, dotting Cummins with shots from every angle as Cummins clinched more often and more recklessly.

A left-right from Cormier put Cummins on ice skates, and from there Cormier followed up with more shots. Cummins tried to stand but fell back to his hands and knees. Cormier pounced on Cummins’ back and fired away with big fists, with the bout being waved off at 1:19.

Cormier (14-0), who was ranked 4th at heavyweight, no doubt broke into his new division’s rankings with the performance; Cummins, who’d struggled to fight fights on the local circuit,  sees his record tick to 4-1 but did, at least, break into the UFC. "I feel good because it's my first finish in UFC," said Cormier, who was once unable to compete in the Olympics due to a botched weight cut. "Training camp was long and hard and I prepared for a long fight. I'm going to stay in this cycle and be this healthy in every camp."

Top-ranked welterweights Rory MacDonald (ranked 4th in the division) and Demian Maia (6th) went to war for fifteen minutes, with the younger MacDonald using his strength and technique to outpoint Maia’s heart and tenacity.

Round one was all Maia. After having his first takedown attempt shrugged off, he grabbed a leg and got it to the mat 20 seconds in. MacDonald defended in butterfly guard, but fourth-degree black belt Maia used shots to the body to loosen up “Ares” and pass into mount. He threw punches and elbows from top as MacDonald bucked and struggled. MacDonald did manage to stand again with a minute left, and the two traded kicks with Maia landing another right.

At the start of round two, Maia looked tired while MacDonald looked motivated, as MacDonald fired off a series of kicks to discourage Maia’s takedown attempts. Maia had early success with cracking fists, but soon he appeared desperate, shooting over and over as MacDonald pushed him off. MacDonald teed off, mixing rights, lefts, uppercuts, body kicks, straights and head kicks that seemed to have Maia injured. Maia slowed and even wobbled – particularly from a pair of right hands at the end of the round -- but MacDonald held back from going for the kill. 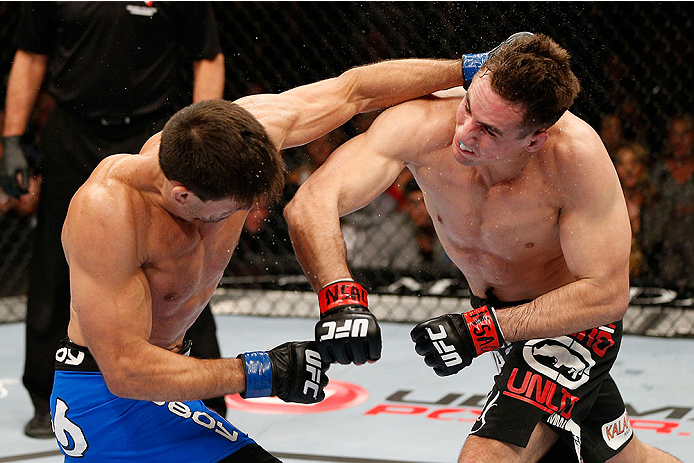 MacDonald’s left jab and right hand held Maia at bay early in the third. Maia tried fewer takedowns, but his strikes bacame slow and sloppy, leaving him generally offenseless. Maia finally closed the distance and grabbed MacDonald against the fence, using a bodylock to lift MacDonald and plant him on the ground. Eventually MacDonald used a butterfly sweep to get back to his feet, and Maia landed another shot, but he then went back to futile takedown attempts, looking slower each time he stood. Still, MacDonald moved backward, and though his punches had less power, Maia’s still came first and hit their targets more than MacDonald’s.

The 24-year-old Canadian’s win ups his record to 16-2, with all three judges giving it to him 29-28 over Maia (18-6). “I showed myself out there today and I didn’t hold anything back,” he said. “Demian shoots really low so after the first round I altered my posture and leaned in. It helped prevent his shot and made all the difference in the fight.”

After having his four-fight win streak halted by Matt Brown last summer, 38-year-old welterweight Mike Pyle jumped right back on track, TKOing fellow brown belt TJ Waldburger in the third round.
Keeping their distance from one another and trading leg kicks, it was Waldburger who controlled the standup, slipping in and out and connected repeatedly with his left hook. From a clinch, Pyle got an easy trip takedown backward, and moved into side control. In between short punches, Waldburger snuck out, controlling Pyle against the fence. But Pyle grabbed his beloved clinch and landed a solid knee to the head before tripping Waldburger backward again at round’s end.

Pyle switched to a front-kick tactic in the second, before charging forward and getting a takedown. Waldburger grabbed for a heelhook, but Pyle rolled and landed on top as Waldburger used butterfly hooks to get his feet back underneath him. Back on the feet, Waldburger’s nose was bleeding and 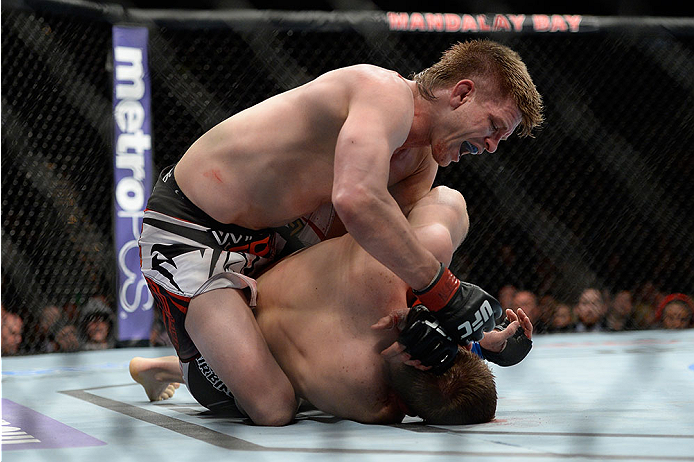 Pyle looked tired, with both men taking more space. The best blows in that round came via Pyle’s knees, which tagged Waldburger twice. Another scramble on the feet gave Pyle the bodylock, and he rolled Waldburger to the mat before standing back up, this time both men looking weary.

Waldburger led with fast hands in the third, but Pyle had found his rhythm, paying back Waldburger with counters nearly every time. Pyle injured Waldburger twice in the middle of the Octagon, once with a big right and once with a spinning back elbow that dropped him. Waldburger retaliated by pushing in for a takedown against the fence, but Pyle got in a knee to the head and an elbow on the break. Waldburger shot in, but met another knee, and Pyle followed him to the mat. He used a guillotine to reverse into mount, then dropped a series of ruthless elbows until referee Herb Dean waved it off at 4:0
3.
Las Vegas-based Pyle, who was ranked number 15 going into the fight, now boasts a career record of 26-9-1. Texan Waldburger loses his second in a row via TKO, sliding to 16-9.

For all of Thompson’s kickboxing pedigree, Whittaker’s own karate and Hapkido black belts let him hold his own in that realm. Whittaker made contact first, and his left jab connected over and over. Thompson tossed off a body kick and a flashy snap kick, mixing it up with uppercuts and body shots. Early on, Whittaker’s forward pressure and boxing limited Thompson’s previously-seen kicking combinations.

But once Thompson found his range, it was a plain old left hand that first stumbled Whittaker. The Aussie stood, but Thompson kept at him with lefts and rights until a monstrous right hand dropped him again. Thompson pounced into back mount and kept the big blows coming until the bout was called at 3:43. “I can’t even describe how good I feel right now," said Thompson. "Whittaker is a very tough opponent so I was careful to stay away from his power and use my speed."

Check out photos from all of the UFC 170 action.