Rousey And Correia Collide Once More Ahead Of Title Fight Today

UFC fans, head to your nearest Wingstop now & pick up your UFC 30-pack before UFC190! Enter in-store for a guaranteed online PPV discount code and the chance to win a trip to UFC195! 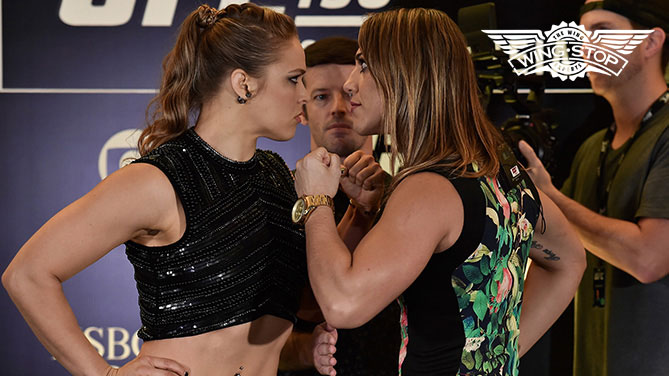 They’re going to face off one more time, and then Ronda Rousey and Bethe Correia will finally settle things in the Octagon at UFC 190 Saturday night. But oh, the anticipation for today’s weigh-in.

Consider the animosity and the angry looks Rousey and Correia have exchanged since the announcement of their fight for the UFC women’s bantamweight title. There has been no shortage of bold pronouncements and firm predictions between the two undefeated fighters, but they’ll have to wait one more day before they meet.

Until then, fans in Rio de Janeiro will have to be content with today’s weigh-in at HSBC Arena. After they step on the scales, Rousey and Correia will have one final opportunity to look into each other’s eyes and see who blinks first.

It could be a repeat of their staredown at Thursday’s media day in which Rousey strode confidently toward center stage with her left fist inches from Correia’s face. Correia talked non-stop as she faced the bantamweight champion, but Rousey didn’t react.

Afterward, Rousey noted that Correia seemed fidgety as they squared off. Nerves? Possibly.

Rousey has made this fight personal, objecting to Correia’s comment that she hoped Rousey didn’t kill herself if she lost their scheduled five-rounder. Having lost her father to suicide, Rousey was genuinely offended by the remark. She was still emotional about it during an interview Thursday with the UFC’s Megan Olivi.

But as she has said frequently, emotions and feelings are left behind when the Octagon gate closes. It’s all business.

And it will be all business when they weigh-in today.